Normalization between Cairo and Ankara would not only benefit the two capitals, but also have an impact on regional crises such as the Israel-Palestine impasse and the stalemate in the Eastern Mediterranean. 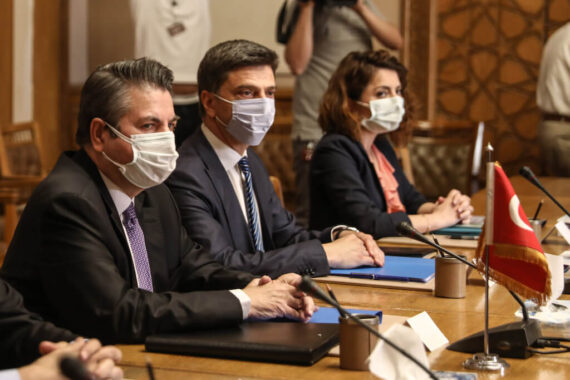 Saying that Turkish-Egyptian relations have had a turbulent period since the ousting of Egyptian President Mohamed Morsi would be an understatement. Since the 2013 Egyptian coup d’état, Turkish-Egyptian relations have been demoted to the charges d’affaires level, primarily acting on economic and cultural communication. Furthermore, since then the attitude of both countries towards each another has been hostile due to a series of factors.

From the Turkish perspective, Morsi’s ousting from the Egyptian presidency was regarded not only as the defeat of free elections and the will of the people, but also as a vital blow to the democratization process witnessed in the country and the MENA region as a whole, in the aftermath of the Arab Spring. Keeping in mind Turkish President Recep Tayyip Erdoğan’s strong support for the democratization process in Egypt and in the Middle East, the establishment of an undemocratic regime under Abdel Fattah el-Sisi led to a hostile approach between the two countries. At the same time, later events also contributed towards Turkey’s pessimistic outlook on the Egyptian political sphere.

Following the 2016 Turkish coup attempt, Ankara underlined its critical stance against coup attempts towards elected governments around the world. This stance has further aggravated Turkish-Egyptian ties, which has led Cairo to an oppositional stance toward Turkey’s new active regional policy. The latter is evident from a brief glance at the contemporary political disputes in places such as Libya and the Eastern Mediterranean, where Ankara and Cairo have been in opposite blocs of the disputes until recently.

However, the recent developments in the relations between Ankara and Cairo have brought about a possible partnership between the two countries, which could benefit both sides of the Mediterranean and lead to a possible normalization of bilateral relations in the near future. Therefore, the normalization initiative should not be seen as a one-sided approach but rather a bilateral one. That means that both parties would benefit from normalizing relations in domestic, foreign, and economic policies.

With its serious and eminent challenges in domestic and foreign policy, Egypt desperately needs normalization with Turkey.

Recently, experts have tried to answer the question of which actor stands to benefit the most from the normalization. Some argue that it is Turkey that initiated the normalization and therefore Ankara is in a weaker position. Others disagree and argue that with its serious and eminent challenges in domestic and foreign policy, Egypt desperately needs normalization with Turkey.

It would be a one-sided and incomplete approach to assume that Turkey has been unilaterally compelled to initiate the normalization based on political and economic factors. In fact, the normalization initiative is a clear sign of Ankara’s constructive foreign policy agenda, which aims to reduce regional tensions in order to prevent further deterioration in regional politics.

From Egypt’s perspective, Cairo perceives the normalization process as an opportunity and necessity to counter some of the political and economic weight it has had to carry since the 2013 military coup. Furthermore, like any form of ties between states observed within international diplomacy, their context and, subsequently, the dynamics that influence and shape them can be subject to change or alteration.

Therefore, it can safely be said that the normalization initiative was launched by both parties which are aware of the fact that they will both benefit from this process. It is important to address, however, the factors that drive the two countries to come to terms at this particular period.

Read: How the Egyptian Press Views a Possible Egyptian-Turkish Reconciliation

The Muslim Brotherhood is no longer in a position to challenge the current government. Nor does the organization have any aspiration for political leadership throughout the region. In addition, it no longer wants to hold back the potential ties between the two countries, as stated by journalist Moataz Matar. This partly paves the way for the enlargement of bilateral trade as well. However, how Egyptian authorities will assess this new face of the Muslim Brotherhood remains contested amid Saudi and Emirati interventions to demonize the group further in regional politics.

From Egypt’s perspective it has become apparent that the initiative in the Eastern Mediterranean does not stand a chance without Turkey’s participation.

A second factor leading to the normalization process between the two countries is the developments in the Eastern Mediterranean. From Egypt’s perspective it has become apparent that the initiative in the Eastern Mediterranean does not stand a chance without Turkey’s participation. A recent example of this is the East Mediterranean Gas Forum (EMGF). The organization, which has attempted to marginalize Turkey and excluded regional countries like Libya, Syria, and Lebanon from cooperation, is not portraying itself as a long-term initiative.

With the vetoing of the participation of the UAE in the EMGF by Palestine, cracks are already emerging between the members of the initiative. Furthermore, the EEZ agreement between Ankara and Tripoli has severely hindered the idea of a proposed pipeline through the region without the approval of Turkey. These developments pushed Cairo to come to the conclusion that including Turkey in Eastern Mediterranean initiatives would better serve Egypt’s interests and those of the region as well.

Read: Who Is in Control of Egyptian Football?

Another factor from the Egyptian side is the growing tensions between Egypt and Ethiopia, with regards to the Grand Ethiopian Renaissance Dam (GERD) dispute. The GERD is a matter of national security for Cairo as the country relies heavily on the water supply from the Nile. A decrease in the volume of water coming into the country would be a disaster for more than 90% of the population, which resides in the Nile Basin.

The years-long negotiations did not produce any positive outcome as the two most populous countries in the Nile Basin face a violent confrontation. In this regard, Cairo seeks to reach out to new allies like Turkey to strengthen its foreign policy engagements. Egypt also considers that Turkey can have a constructive position in resolving the crisis with Ethiopia as Ankara has warmer ties with Addis Ababa.

A fourth factor to consider in the Turkish-Egyptian normalization process is the ongoing developments in neighboring Libya. Resembling the GERD dispute, Cairo perceives the stability of Libya as an important matter of national security. Within this context, the state-building processes undertaken in the country have alienated Khalifa Haftar, who was supported by Cairo since the second round of the Libyan Civil War. On the other hand, Turkey had stood beside the internationally recognized Tripoli-based government and signed various agreements with the latter that have also been recognized by the Government of National Unity, including those relating to the military.

This has somewhat pushed Cairo to seek a common ground with Turkey, in line with its demand of the exit of foreign troops from the country. Since then, Egypt’s position in Libya has changed and Cairo started to initiate direct talks with the Tripoli government. This is a clear indication that Turkey’s determinant policy in Libya has forced Egypt to reconsider its position in the country.

The move to normalize relations between Turkey and Egypt is a positive sign with regard to the future of the relations. As the talks in Cairo on May 5-6 were conducted in a positive and frank atmosphere, further rounds of talks can be expected. A possible normalization between Cairo and Ankara will not only benefit the two capitals, but it can also have an impact on resolving complicated regional crises such as the Israel-Palestine impasse and the stalemate in the Eastern Mediterranean. While it would be naïve to expect a rapid rapprochement between Egypt and Turkey, there can be a gradual reconciliation between the two regional powers.