Whatever had not happened before in the history of the Fifth Republic has taken place in the second round of the French presidential elections. 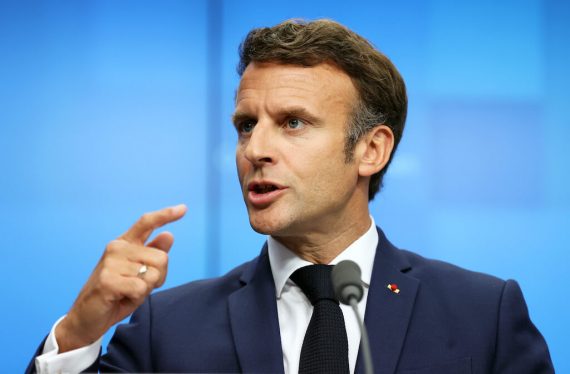 “For they have sown the wind, and they shall reap the whirlwind.” To make things worse, the storms that French President Emmanuel Macron will face are not of only one kind. Whatever had not happened before in the history of the Fifth Republic has taken place in the second round of the French presidential elections.

Undoubtedly, Marine Le Pen was the elections’ most successful name. Le Pen, who could not get enough deputies in the past elections even to form a group in the parliament, increased her party’s number of deputies 11 times and won 89 seats. In the second round of elections, the ultra-leftist party leader Jean-Luc Mélenchon was the rival of President Emmanuel Macron, who, for two consecutive elections, had run against the far-right party leader Le Pen for the Élysée Palace.

This led some commentators to argue that the far right was weakening, but it actually was not. Comments that the second-largest political power in the country had shifted from the far right to the far left within two months, and that the voters in France were acting on a very unpredictable ground were also not true.

In the second round of the 2017 presidential elections, Le Pen was behind Macron by 32 points. In the 2022 elections, again in the second round, the difference dropped to 17 points. The difference between Macron’s and Le Pen’s votes was only 4.69 percent in the first round of the 2022 election. However, the parties on the left united and formed a single bloc despite the rivalry among them, whereas far-right parties could not. If Marine Le Pen had been able to convince Eric Zemmour, who preferred to run independently, and bring him under her party’s umbrella, she could have found herself abreast with Ensemble (the bloc supporting Macron) and NUPES (the bloc supporting Mélenchon) in the first round.

Notorious for his hostility towards Muslims and immigrants and some anti-Semitic rhetoric, Jewish far-right Eric Zemmour was the most talked about name in the presidential elections. Zemmour received 4.25 percent of the votes in the first round and split Le Pen’s vote. No one could predict that Zemmour could get such a high score, while it was considered almost certain that Le Pen would increase the number of deputies of her party, which was founded 50 years ago by her father, with 18.66  percent of votes in the first round. In fact, Marine Le Pen would run in 208 of 577 constituencies, 88 more than the last election held five years ago.

The NUPES alliance, led by the former Marxist Mélenchon, won 131 seats, less than expected and did not please the left. Hopes were indeed higher for the NUPES alliance for the second round. The alliance’s score in the first round was celebrated in the left press with headlines such as “The Left Is Coming Back.” The right press saw headlines along the lines “Will Communism Come to the Country This Summer?” aiming to frighten undecided voters. However, Mélenchon’s party, Unsubmissive France, which one day was portrayed in the media as the dreadful shark in Spielberg’s 1975 movie Jaws, another day was a monster, and yet another a bogeyman, eventually won 72 seats—in 2017, it had only 17.

Read: Why French Youths Abstain from Voting in the Presidential Election

Behind NUPES’s failure to live up to the expected success, one reason might have been the alliance with political parties with mutually hostile ideas. In the presidential elections, Paris mayor Anne Hidalgo, the candidate of the once most powerful Socialist Party, won 1.7 percent and Yannick Jadot, Green Party leader, received 4.6 percent. This result forced both parties to ally themselves with Mélenchon, a typical anti-imperialist from the Cold War times.

The Socialist Party and the Greens, which were saying “Europe is in our DNA,” had to agree with Mélenchon, who is in favor of disregarding the directives of the European Union and and by implication is in favor of leaving the union. According to a critical analysis published in the weekly L’Express, “Both political parties did not object to have their DNAs slightly tampered to gain some seats in parliament, like Henri IV, who in the 16th century said ‘Paris is worth a religious ritual’ and switched from Protestantism to Catholicism to become king.” But for the Socialists and the Greens, the problem was not just DNA codes!

Apart from being an anti-EU political figure, Mélenchon is a leader who, despite condemning Russia’s invasion of Ukraine, is a Russia sympathizer, someone who offered to leave NATO and seek an alternative to the Western bloc. His ultra-leftist party is not alone in these matters: Marine Le Pen’s National Rally argues the same. Already in the first round of the presidential elections, the total votes of large and small parties advocating such views exceeded 55 percent.

Eight months before the 2017 presidential elections, Macron had resigned from his position as minister of economy in the socialist government, and first won the presidential elections and then 308 seats in the second round of elections with his party, whose motto was “Neither right nor left, both right and left.” Five years later, his La République En Marche ! (Republic Forward), which changed its name to Renaissance, received only 170 seats in the election.

Macron could not reach the numbers of five years ago, even with the votes of a total of seven parties, large and small, united behind the bloc and entering the election together. The Ensemble, the alliance of political parties supporting Macron, won 245 seats and thus remained 44 seats short of an absolute majority.

Along with Macron’s unsatisfactory performance in the last five years, there were other reasons, of course, behind the election results such as the COVID19 pandemic, Russia’s invasion of Ukraine, and the economic and social consequences of the war. However, the economic policies of President Macron and his government, which further widened the gap between the rich and those with a low income, and his Islamophobic rhetoric and legal regulations targeting Muslims that were actually unprecedented in Europe affected both election results.

Thus, while the far-right politics moved to a legitimate ground, Le Pen and the like, on the one hand, and those who took a hostile position against such policies, on the other, like the far-leftist Mélenchon, gained strength just for this reason by winning the votes of 70 percent of Muslims.

In the 2017 elections, the traditional right and left parties had weakened to a great extent against Macron’s brand-new party and were finally buried in the 2022 presidential elections. The socialist party, which had 30 seats in 2017, was able to get 26 seats, while the Republicans, which had 112 seats, could only get 61 deputies. The Union of Democrats and Independents (UDI), another right-wing party that entered the election with the Republicans, had 18 deputies last time, but could only get three this time. It deserves mentioning also that for the first time in its history, Paris will not have either a socialist or a republican deputy.

Another important result in the second round of elections was the indifference of the French people to the elections: a new record was set with 53.77 percent abstention and 7.67 percent protest votes. According to the detailed analyses of the election results by poll companies, although all parties were affected by this situation, the left was affected the most. It seems that indifference to the left bloc and sometimes the fact that there was no left bloc candidate in some electoral districts despite the risk of the far-right candidate being elected in the second round and no votes for the bloc supporting Macron all contributed to this new record.

Before his visit to Romania and Moldova, President Macron spoke recently in Orly and asked for an absolute majority in order not to add “French disorder to the world’s disorder.” There was no absolute majority in the elections, and even the Republicans, judging by the statements of their officials, do not want to cohabitate the same political space as Macron. As Élisabeth Borne, prime minister of France, said, the country is indeed in an “unprecedented state”!