In his brief 10-minute speech after the election results were announced, Macron hastily began embracing Muslims. 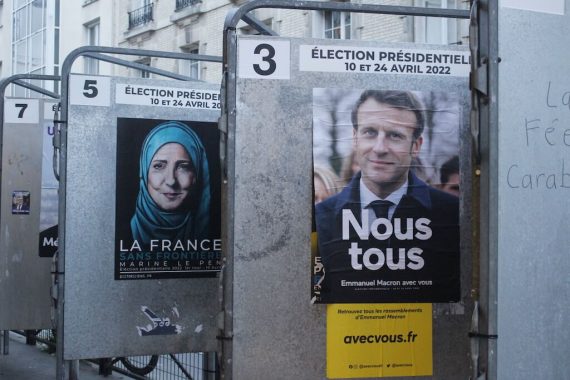 Posters depicting candidates competing in presidential election, in their most opposing states, made by French street artist Jaeraymie are seen on bilboards in Paris, France on April 10, 2022. Photo by Esra Taşkın, Anadolu Images

In France, a founding member of the European Union, the far-right party has advanced to the threshold of the Élysée Palace, and its voice is now being heard not only at home, but around the world. Marine Le Pen has never been so close to winning the presidential election. What if she crosses the threshold?

Since the night of April 10, French politicians, academics, intellectuals, journalists, and especially President Emmanuel Macron, have been repeating both verbally and in writing: “This is a historical responsibility, it is time to unite against the extreme right!” In the Fifth Republic, when this call was first made 20 years ago, in 2002, Jean Marie Le Pen eliminated the socialist candidate Lionel Jospin, but President Jacques Chirac won the election with 82.21 percent in the second round.

In 2017, when Emmanuel Macron won 24.1 percent and Marine Le Pen 21.30 percent of the votes in the first round, the call was repeated: “This is a historical responsibility, unite your votes against the extreme right!” Although the difference was not as clear as last time, Macron came in at 66.10 percent and Marine Le Pen at 33.90 percent. Here it is, five years later, in the first round, Emmanuel Macron got 27.84 percent, Marine Le Pen got 23.15 percent, and the other two far-right candidates Eric Zemmour got 7.07 percent and Nicolas Dupont-Aignan 2.28 percent.

The far right thus received a total of 32.50 percent of the votes in the first round. This time, according to various polls that see Macron ahead, the gap between the two candidates is closing and is only between 2 and 7 points.

Read: Why French Youths Abstain from Voting in the Presidential Election

In the last elections, the country’s traditional left and right parties had weakened in favor of Macron’s “neither right nor left, both right and left” party; this time, they were buried. Anne Hidalgo, the candidate of the socialists and the mayor of Paris, received 1.75 percent of the votes. Valérie Pécresse, the candidate of the center-right party of the Gaullist tradition, Les Républicains, is crying foul because her 4.78 percent will not allow her to receive state aid, and has launched a campaign to cover election costs.

Parties that receive less than 5 percent of the votes in France are not eligible for state aid. While that is the scenery, Jean-Luc Mélenchon, the leader of the ultra-leftist La France Insoumise party, who is a presidential candidate for the third time, scored unpredictably high, receiving 21.95 percent of the votes. In other words, he almost scored high enough to qualify to run against Macron for the second round, the difference with Le Pen being only 1.2 percent.

Why did the far right and the far left get stronger?

So, what happened to make the far right and far left so strong in France? Why is everyone, especially Macron, screaming that “Republican values” are under threat? Why are the leaders of the Rassemblement national (National Rally) party (Le Pen), the Reconquête (Reconquest) (Zemmour), and Debout la France (Dupont-Aignan) called far-right? Who are their enemies, what makes the far right a far right?

The economic measures of Macron’s rival, Marine Le Pen, are similar to those of the far-left and even centrist parties. She wanted to take France out of the military wing of NATO, but De Gaulle also did so in 1966. She does not say, “France should leave the European Union,” but she makes promises that will inevitably create a de facto departure from the EU. “I will recognize the supremacy of constitutional law over European law by holding a referendum,” she says.

Read: How the Russia-Ukraine War Turned the Political Climate in France Upside Down

After all, the Conservative Party, which led the United Kingdom’s withdrawal from the European Union, is not a far-right party, so even a small vague promise is not enough to make a party far-right. There is, however, an “enemy” that makes them far-right and against which all three parties shape their policy and targets: Muslims and immigrants. This is the main figure that makes them far-right!

Marine Le Pen, who took over the leadership of the party in 2012, has erased the anti-Semitic rhetoric in her party and formed a front against the Muslim minority and immigrants in the country. The Jewish-origin candidate Eric Zemmour, on the other hand, has expressed some anti-Semitic rhetoric based on historical cases, but has come out with openly racist, anti-Muslim propaganda and has moved on in a very short time. Zemmour broke the record by receiving 53.59 percent of the French votes in Israel in the first round!

Again, what happened that the far right and the far left have become so strong in France? Why is the gap between Macron’s and Le Pen’s support closing, and people even fear that Le Pen might win? As a direct result of the legislation, discourse, and policies of Macron’s presidency and government regarding Islam and Muslims, France is now a much more Islamophobic and anti-Muslim country than it was before 2017. So much so that Macron has begun a perfect practice of Islamophobia that gives Muslims no respite by labeling them “Islamic bogeymen” wherever the Muslim faith is seen.

While Macron said in his 70-minute speech on “Fighting Separatism” that “in some schools, some students want meals in the canteens based on their religious beliefs” (i.e., they do not eat pork), according to Interior Minister Gérald Darmanin, this was communitarianism and unacceptable. In October 2019, Macron’s former interior minister, Christophe Castaner, described having a beard or celebrating Ramadan as “conspicuous” and a sign of radicalism. These and similar absurd statements were well received by France’s elite, whose apparently influential majority is extremely Islamophobic, and became the cover story of weekly magazines.

The Imam Charter, for example, a unique state-level text on anti-Muslim hostility, was the official declaration that Muslims were a separate and dangerous entity under the French Constitution and laws, even in their very existence. Judging by the ideas and actions that the imams, and thus Muslims, were supposed to commit to never think or act, they were a community prone to committing all kinds of evils, including “discrimination against the sick and disabled.”

Indeed, Macron’s government this year even shut down the Collective Against Islamophobia in France, one of the leading anti-discrimination organizations documenting hate crimes against Muslims. Between 2018 and 2022, France rummaged nearly 25,000 mosques, schools, associations, and workplaces, and shut down 718 bodies, including more than 20 mosques. The state demonizes Muslims with its Imam Charter, Anti-separatism Law, its so-called French Islam with its fabrications and rhetoric, and portrays Islam as a dangerous religion that needs mass surveillance and oppression. Muslim French are presented as an existential threat to France’s “civilization,” “tradition,” and “values.”

With a president and government that patented Islamophobia for themselves, naturally, Marine Le Pen had to go from door to door in the election campaign in order not to get euchred out of her voters. What’s more, Zemmour emerged as another candidate in the elections. “Sow the wind and reap the whirlwind,” say the Turks.

In his brief 10-minute speech after the election results were announced, Macron hastily began embracing Muslims. In his refutation, he said excitedly and surreptitiously, “I do not want a France that prevents Muslims or Jews from eating as their religion dictates. No, we will not.” For the first time, Macron mentioned Muslims and Jews in the same sentence, but because of the strict laws and sanctions against anti-Semitism, no one cares about the kosher of the Jews. He could not stop himself and went on to give a message to Muslims before the second round on April 24: “Madame Le Pen says she will ban the headscarf. Then, she will not be president of all French people.”

Before that, however, Macron had said, “The headscarf contradicts our country’s civilizational understanding of the relationship between men and women, and therefore makes us feel insecure.” Each of his ministers made numerous statements on the same subject. Marlène Schiappa, Minister Delegate in charge of Citizenship attached to the Ministry of Interior stated, “The headscarf is a political act,” and Minister of National Education Jean-Michel Blanquer said, “The headscarf is undesirable in our society.”

The Minister of the Interior Darmanin, who opposes Le Pen today, said, “In no democratic country in the world, is there a ban on religious symbols and signs in public spaces,” the women wearing headscarf were taken hostages in accordance with traditions that are not compatible with the Republic.

While hostility to Muslims brought votes from the far right, respect for Muslims also brought votes from the far left to Jean-Luc Mélenchon. French Muslims, who had to choose between deliberate abstention and voting, gave their votes to the far-left candidate Mélenchon by 70 percent, according to polls. Many French Muslims posted the following message verbatim on their social media platforms: “I never look at the world ideologically from the same angle, but Mélenchon does not discriminate, does not point fingers, does not label us and even condemns Islamophobia.”

The legitimization of Islamophobia, which resurged in France after the colonial period, especially since the 2000s, has played a very important role in the growth of the far right. Today, it is no longer just a threat to Muslims, but it indirectly threatens the rule of law, the European Union, and even the country’s strategic choices and alliances.