Since this piece was written the Canadian government officially named the U.S. right wing militia group Three Percenters a terrorist entity. On the same day a Muslim man in Saskatoon was stabbed in the back multiple times while his attackers yelled "We hate Muslims." 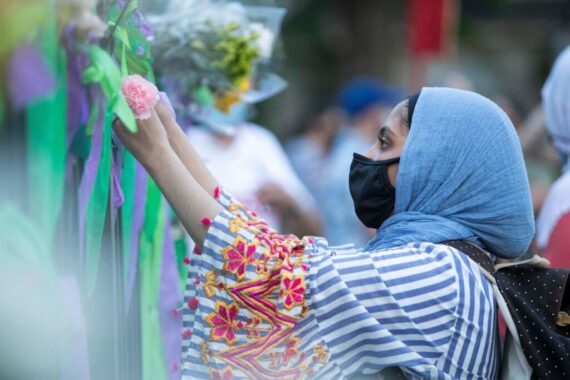 A young woman puts a flower on the fence of the London Muslim Mosque during the multi-faith march to end hatred, after a man driving a pickup truck struck and killed four members of a Muslim family in London, Ontario, Canada on June 11, 2021. Photo by Nicole Osborne, AFP via Getty Images

The Canadian public has not been immune from globalized Islamophobic and anti-Arab discourse in popular media. However, we have a problematic local political history that we need to contend with. It was in 1975 that the Globe and Mail published a false story during Montreal’s hosting of the 1976 Olympics, claiming that the Mounties had uncovered a conspiracy by fourteen Canadian Arabs to commit terrorism at the Games. The justice minister and the RCMP commissioner denied the story, but it was picked up by every newspaper and TV and radio station across the country.

During the first Gulf War, Canada joined forces with the United States and began targeting its own Iraqi-Canadian population with CSIS interrogations as it was receiving intelligence from Canadian posts in Iraq. Iraqi-Canadians were pulled out of workplaces, called at home and asked pointed questions about whether they supported Canadian “allies” in the gulf war. At this time, stories of “internal threats” in Canada were rampant in the media, filtered through often less than rigorous journalistic standards.

On January 6 1991, ten days before the United States began bombing Baghdad, the Toronto Sun published a story identifying 12 “pro-Iraqi agents” in Toronto, planning a “disturbance” in case war began in Iraq. A few days later, the Sun ran a headline that read “Police Task Force Targets Agents of Terror.” A slew of “terrorism alerts” were published in various newspapers in Toronto, feeding off of each other, unverifiable by their purported sources.

Read: Living as Muslim in New Zealand after the Christchurch Mosque Attacks

Discourse about anti-terrorism rang through media without much activity to qualify it, sensationalizing banal threats and connecting it to the language of the “war on terror,” which many Canadians often think began after 9/11. The stories ended up focusing more on security alerts than terrorist activities. The Canadian government did little to dispel this paranoia and CSIS continued to interrogate Iraqi Canadians.

Decades later, when—in the same week—a Muslim family of 5 (the Afzaal family) is run over in London, Ontario (leaving a nine year old boy as the only survivor); three white people show up at a mosque in Toronto, threatening to detonate a bomb, and a black Muslim woman is attacked in Edmonton,  the Canadian public is asking, “How did we get here?,” “How did this happen?” When the Quebec shootings during which six Muslims were killed and eight injured in prayer in 2017 happens in cold blood; when mosque caretaker Mohamed-Aslim Zafis was brutally slain by a white supremacist in Toronto last year, politicians state: “this is not our Canada” and other similar rhetorical repulsions of this violence.

The truth is that Islamophobia has been a fundamental part of the Canadian political fabric and public discourse for decades, operating to help define Canadianness through the very abjection of Muslims, Arabs and other minorities who are read as Muslim or Arab. And this abjection is reproduced and protected by state systems and institutions.

The Toronto Police have been recently reacting in a biased fashion, protecting white supremacists during their marches of propaganda while at the same time CSIS is often found undercover at university campuses in the greater Toronto area, trying to entrap Muslim students into saying something hateful, sometimes even knocking on their doors.

In recent years, the tenets of Canada’s Multiculturalism Act have been articulated through the accommodation model—that “Old Stock Canadians” are accommodating Muslims and require of them full cultural assimilation (relying on misleading tropic binaries of cultural differences).

In April 2009, the Minister of Citizenship, Immigration and Multiculturalism, Jason Kenney delivered a speech entitled, “Good Citizenship: The Duty to Integrate” at Huron University College’s Canadian Leaders Speakers’ Series. The minister noted that The Multiculturalism Act and The Citizenship Act and programs are “pathway[s] through which people must pass to join our Canadian political community.”

Anchoring the concept of old stock Canadians, Kenney cites The Unfinished Canadian, which “deplores the way Canada is becoming…‘The greatest hotel on earth.’” Kenney urges his audience “to take this metaphor of ‘Hotel Canada’ very seriously.” Quoting Rudyard Griffiths, he goes on that this phenomenon “is undermining the very strengths and underpinnings that have made Canada a great country. The lack of knowledge of what has given us the country we know, he warns, is potentially disastrous.”

The idea of “race suicide” is a common rhetoric of extremist groups who are often prophesizing about an imminent so-called Islamicization of Canada. Islamophobic violence is seen as a kind of “defense” or necessary evil to stop this takeover, however, this fear and hate is quite literally born out of the decades of Islamophobic myth creation—supported by Canadian media and the state—that would come to validate Western hands in imperial projects in the Middle East.

In 2015, Kellie Leitch and Chris Alexander (politicians and former members of the Conservative Party) implemented The Barbaric Cultural Practices Act (a snitch line through which one could call about their Muslim neighbors’ violence against women), framing domestic violence as particularly unique to Muslim families. This was following the tragic “honor killing” of Aqsa Parvez. In the same year, there were 84 domestic homicides in Ontario related to Intimate Partner Violence, not to mention horrific structural violence against indigenous women.

Yet, Parvez’ murder is seen to have been exceptional to this national epidemic of violence against women, across identity group categories. Leitch’s policies framed Gender Based Violence as exceptional to Muslim cultures, further dichotomizing Islam and Canadianness. Islamophobia is not growing in some seedy corner of Canadian society—it is being nourished in the public eye, for all to see. It is stitched in the fabric of our political atmosphere.

Kenney’s anti-immigration rhetoric, Stephen Harper’s introduction of Bill C24 (essentially creating a second class citizenship system, disproportionately affecting the Muslim community), and more overtly, Paul Fromm’s (Hamilton mayoral candidate) public celebratory description of the 2019 New Zealand massacre (wherein a white male killed 51 Muslims and injured 40 during Friday prayers) as “cogent” and the alarmingly significant amount of votes for Faith Goldy’s run for Toronto mayor despite her right wing extremist work with the Daily Stormer all illustrate the banality of Islamophobic hate speech in mainstream politics—legitimating the “race suicide” thesis. Such an environment sews the seeds of hate, no matter how covertly this normalization hides behind immigration restriction or integration policies.

Many in the Canadian Muslim community were uncomfortable with the ways in which politicians from the liberal and conservative parties showed up to the emotional vigil for the Afzaal family in London, Ontario last week, arguing that it felt like they were using it as a political platform and not addressing the culpability of Canadian institutions in fear mongering and vilifying Muslims.

Currently, Quebec’s Bill 21 bans religious symbols prohibiting Muslim women from wearing hijab in positions of authority in the workplace as well as public sector jobs; and there appear to be hesitant and murky debates about opposing anti-Islamophobia legislation. The M-103 motion which condemns Islamophobia has seen some debate within the Conservative Party since 2017; and Doug Ford (the Premier of Ontario) blocked a motion on Islamophobia two days after the June 2021 London vigil (even if another was put forth, afterwards).

Read: “We Are Scared of Our Own Shadow”: Islamo-Paranoia in France

The Toronto Sun continues to publish Islamophobic pieces and recently published an article by Jerry Agar, in which he argues that we should have sympathy for Nathaniel Veltman (the white terrorist who killed the Muslim family in London, Ontario), essentially questioning whether his attack was hate motivated, pointing instead, to Veltman’s parents’ divorce and his proclivity to anger. The Toronto Sun also published a piece called “There is no Islamophobia in Canada” within which ironically, Islamophobic tropes were deployed about the hatefulness of Muslims towards other religions. Irwin Cotler, a prominent politician and lauded figure of human rights in Canada retweeted the contents of this article (apologizing, later).

Now the government is committing to a National Action Summit on Islamophobia, but the Canadian Muslim community is waiting to see what the outcome will be before holding out hope—in terms of concrete policy—to see if the Canadian government is truly committed to preventing more loss of life. If we are to advance past the historical multiculturalism model wherein we simply verbally repudiate hate, and do menial things like simply celebrate the food and clothing of othered cultures, we must contend with the ways that Islamophobia has been historically politicized in Canada.

Since this piece was written the Canadian government officially named the U.S. right wing militia group Three Percenters a terrorist entity, as it has an active presence in Canada.

On the same day a Muslim man in Saskatoon was stabbed in the back multiple times while his attackers yelled “We hate Muslims,” “Why are you here?” and other Islamophobic comments. They also cut off his beard.

Wafaa Hasan (Ph.D., English and Cultural Studies) is an Assistant Professor (Teaching Stream) in the Women and Gender Studies Institute at the University of Toronto-St. George campus. She is an international lecturer, author and scholar who has taught in the Centre for Women and Gender Studies at Brock University, the Historical and Cultural Studies Department at the University of Toronto-Scarborough Campus and in the Gender Studies and Feminist Research Program at McMaster University since 2016. Her publications examine topics such as contemporary trends of globalization in the Middle East; relations between Arab-Canadian leaders/organizations and the Harper government in Canada; Palestinian childhood in Canadian literature; and global practices of resilience in displacement in Countering Displacements: The Creativity and Resilience of Indigenous and Refugee-ed Peoples (U of A Press, 2012).