My Grandfather’s Fight against Colonialization in Algeria: The Scars of French War Crimes Won’t Be Forgotten 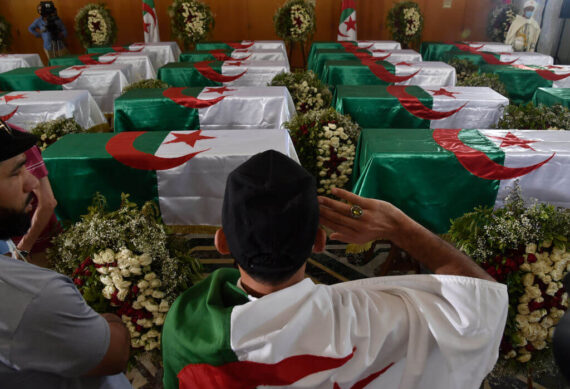 An Algerian man pays respect in front of the national flag-draped coffins containing the remains of 24 Algerian resistance fighters decapitated during the French colonial conquest of the North African country, presented at the capital's Palais De La Culture Moufdi Zakaria on July 4, 2020, a day after they were flown in from France. Photo by Ryad Kramdi, AFP via Getty Images

The violence and brutality of French colonialism in Algeria was horrendous and undeniable. The vast majority of families have been traumatized by the cruel settlement of France in Algeria, including my own. My paternal grandfather, along with his two brothers, assisted the mujahideen and played a part in the resistance during the seven-year War of Independence. My grandfather was captured by French soldiers when my father was six years old. He was detained and tortured for days until his lungs collapsed and he died.

He was hanged upside down and immersed into a container of ice-cold water repeatedly in order to confess and provide leads on the hideouts of the mujahideen – but he never did! It cost him his life and traumatized my father to this day; however, his legacy will remain for decades to come.

There has been an ongoing discussion about France’s duty and responsibility to provide an official apology for its colonial history and war crimes, which has been met with ignorance and denial. Algeria was the only French colony to be considered a French territory. It was largely exploited and “…was considered ‘the door’ to the Third World and the ‘jewel’ of France’s territorial possessions.”

It wasn’t until 2011 that an Algerian scholar living in France, Ali Farid Belkadi, discovered that the Museum of Mankind in Paris holds skulls of Algerian martyrs and that some of them could be identified. Although his discovery didn’t receive support, Ibrahim Senouci, a professor of physics at the University of Cergy-Pontoise, took a different approach and launched an online petition gathering approximately 30,000 signatures to pressure the French authorities to return the remains of the Algerian martyrs as agreed on the the Évian Accords.

In 2016, France admitted that they are in possession of 18,000 skulls, 500 of which were identified including 36 leaders of the Algerian resistance who were beheaded in the mid-19th century.

The Museum of Mankind was established in 1937 by Paul Rivet. The skulls were taken back to France between 1800 and 1881 as trophies of the slaughter in Algeria and kept in boxes to preserve them.

In 2016, France admitted that they are in possession of 18,000 skulls, 500 of which were identified including 36 leaders of the Algerian resistance who were beheaded in the mid-19th century. France claims that the skulls have been kept for anthropological and scientific purposes.

In 2017, French President Emanuel Macron stated, “I have agreed to a request expressed by the Algerian public authorities several times regarding the return of the skulls of the Algerian resistance fighters, and have taken a decision to initiate the process.”

In the same year, which marked the launching of his presidential campaign, in one of his speeches, Macron declared that the French colonial history in Algeria represents “crimes against humanity.” However, the statement was not followed by an apology.

In July 2020, on the eve of July 5, Algerian Independence Day, 24 skulls of Algerian mujahideen who fought against the French colonial rule and played a crucial role in the resistance were brought back from the museum in Paris.

For over 170 years, the remains of these Algerian national heroes had been deprived their right of burial in the country for which they shed their blood.

The skulls belong to prominent resistance fighters, including Muhammad Lajd bin Abd al-Malik, known as Sherif “Boubaghla”; the “mummified head” of the Algerian officer Issa Hammadi; Sheikh Bouziane, leader of the Za’tasha Resistance in Biskra; Musa al-Darqawi; Si Mukhtar bin Qwaider al-Titrawi; and Muhammad bin Allal bin Mubarak who fought side by side with El Emir Abdelkader, the leader of the first resistance against French colonialism and founder of the modern Algerian state.

According to the writer and political analyst Fayez Abu Shamala, French crimes will not be easily forgiven. He asks, “Will the Algerian people forgive the murderers for their deeds? Will they forget?”

It is believed that this French compromise aims to silence the Algerian public opinion and polish the French image among the Algerian population.

On January 20, 2021, Macron received a report from the French historian Benjamin Stora about the French colonial era in Algeria (1830-1962). The report generated distress, criticism, and anger in the Algerian public opinion, and was considered to be manipulative and biased in terms of providing an accurate and truthful version of French colonial history in the country.

France announced the establishment of a “memories and truth” commission to review the country’s colonial history in Algeria. However, the report ruled out the issue of an official apology for France’s crimes.

Moreover, although the report proposes ways to promote healing, it provides data related to the 1954-1962 period and puts much less stress on the events that took place in the period before the  War of Independence (1830-1954). More importantly, the report is short of advising in favor of a proper and official apology for the atrocious crimes that France committed against the Algerian people for decades.

Read: The case of General Aussaresses as an Attempt to Vindicate the French State

Abderrazak Makri, an Algerian political thinker and head of the Society for Peace Movement, commented the following on the report, “You feel as if the report is talking about the story of two groups of people fighting over a common ground between them…You do not feel that the report was talking about a story of occupation, which is the worst kind of occupation that humanity has known, and about a foreign country that has usurped another country, and a land that is not its own.”

The Algerian people have neither forgotten nor will they ever forget and accept the tortures, murders, exploitation, and crimes committed by the French during the colonial period. These atrocious acts played a major role in reshaping Algerian identity.

Whether France comes forward with a sincere official apology or not, Yasmina Allouche, deputy researcher and writer at TRT World Research, argues that “[a]n apology is unlikely to have a measurable effect.” France will not be forgiven, and the scars of its war crimes have had and will forever have dire consequences on the formation of Algerian identity and on the foundations of public opinion regarding French-Algerian relations. 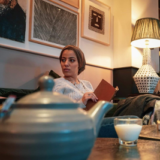 Amira Toureche is a PhD candidate at the University of Exeter, UK at the Institute of Arab and Islamic Studies. She obtained her BA and MA from the University of Oum El Bouaghi in Algeria and both of her degrees were in Anglo-American Studies: Literature and Civilization. Her PhD research investigates the Algerian postcolonial history in relation to decolonization and identity from a Chaoui perspective.