People in the tribal belt of Afghanistan and Pakistan still define their land as a "terrain of resistance" and insist on operating in a world which is not constrained by state lines. 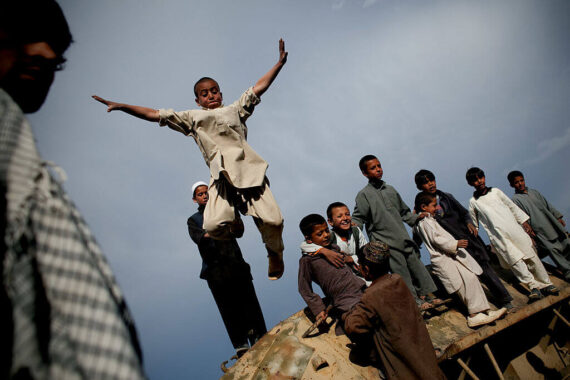 Afghan boys on the outskirts of Kabul play inside a destroyed tank left over from the 1979-1989 Russian invasion on May 2, 2010 in Afghanistan. The Pashtun people also known as Pathans, primarily live in Afghanistan and Pakistan with a total population estimated at around 42 million in some of the 60 major tribes and sub clans. Photo by Majid Saeedi, Getty Images

During the second half of the twentieth century, numerous transformational changes took place in the socio-economic structure of the Pashtun tribes living across the Durand Line between Afghanistan and Pakistan due to forced or labor-influenced migration, civil war, foreign invasions, and the effects of modernity.

The Durand Line in KP stretches approximately for 1,360 kilometers and cuts through the lands inhabited by the tribes of the Salarzai, Mamund, Mohmand, Afridi, Shinwari, Turi, Bangash, Wazir, Mehsud, Dawar, and Aurkazai, while the Achekzai, Nurzai and Kakar also live on the Durand Line and, in fact, dwell almost equally on both sides of the border. This deplorable state of affairs does not conform with the right of peoples to choose their fate nor is it aligned with the 21st-century politics of peace, public welfare, political and civil justice, and economic development.

Fazal Wahid, a researcher and lecture at Peshawer University indicates that the inability of the United States to apply the carrot and stick strategy effectively in Afghanistan prompted Pakistan in 2003 to move its armed forces into KP in an impetuous manner, resulting in failure and the militarization of the tribal belt. This simultaneously caused the tribes to be more proactively involved in the fight against the U.S. military presence in Afghanistan and to defend themselves from the atrocities of Pakistan’s army in the region.

The Pashtun tribal belt goes back to the nineteenth century. Even then, the so-called Durand Line region between Afghanistan and Pakistan had begun to play a role in world politics.

The Pashtun tribal belt goes back to the nineteenth century. Even then, the so-called Durand Line region between Afghanistan and Pakistan had begun to play a role in world politics. Conrad Schetter, a Senior Research Fellow at the Center for Development Studies (ZEF) of the University of Bonn discusses the struggle that was referred to by contemporaries as the “Great Game” and which saw Great Britain and Russia struggle for power and influence in the region between the the Amu River (known historically as the Oxus River) in the north and the Indus in the south. The fact that the Durand Line runs right through the Pashtun tribal areas indicates the significance of the line for the conception of Afghanistan as a nation state.

Schetter and other academics argue that the tribal areas on either side of the Durand Line did not possess any particular status on their own. However, neither state ever succeeded in dominating the tribes. With the exception of the urban centers such as Jalalabad, Gardez, or Khost, Afghanistan could not exercise its powers in the tribal areas.

VIDEO: What’s next for Pashtuns in “the world’s most dangerous place”?

In fact, this is clearly exemplified in the extensive unregulated cross-border trade and travel. In both Afghanistan and Pakistan, the main beneficiaries of the failed implementation of state structures on both sides of the Durand Line were the tribal elites which acted as intermediaries between the state and the tribes.

Historically, the Afghanistan-Pakistan borderlands provide a crucial example of the many puzzles produced by decolonization. On a map, Pakistan’s frontier tribal area seems a tiny strip of land in a predominantly underdeveloped region.

Elisabeth Leake, Associate Professor of International History at the University of Leeds, claims that its prominence to British colonial officials made sense in light of their perception of colonial India as the “Jewel in the Crown” of the British Empire, their sensitivity to czarist Russian interventionism in the Great Game, and their conviction that the North-West Frontier Province (NWFP) and neighboring tribal areas should serve as a buffer against any foreign encroachment.

In the current context, with cross-border terrorism a major regional feature, the region is once again of huge – even essential – importance to both Pakistan and Afghanistan. On the one hand, it is central to the territorial integrity and Muslim identity of newly independent Pakistan. On the other hand, it is necessary to the completion of Afghanistan’s nation-state theorem. In fact, what had been a colonial periphery under the Raj was actively developed and slowly integrated by Pakistani leaders.

Meanwhile for the Afghan royal family, who turned to social, economic, and political modernization in an era of free-flowing international aid and declining British influence, the land across the Durand Line presented the opportunity for expanded influence among the largely Pashtun population which shared ethnic, cultural, and religious roots with much of Afghanistan’s own people.

Despite their seemingly peripheral location in the world, the Afghanistan-Pakistan borderlands exercised remarkable influence on politics in South Asia and beyond. In these borderlands, ethnic, religious, and political networks interlinked, creating a site both molded by events in faraway metropoles and capable of impacting decision-making across the globe.

The U.S. invasion of Afghanistan after September 11 highlighted the Afghanistan-Pakistan boundary region in a way that had not happened since the Soviet invasion of Afghanistan in 1979. The region was the safe haven and retreat of the Taliban and their Al Qaeda affiliates. Schetter correctly argues that this was an area where state power had far less influence and less impact than elsewhere. From 2001 onward, violence in the tribal region escalated. The border tribal region became the heart of the resistance to U.S. invasion and to the Afghan and Pakistani armies. In fact, every attempt from outside to wield influence that impacts on the local order is a source of irritation to the local tribal leaders.

Wahid argues that the tribal economy is mainly based on individual enterprises and irregular activities. On both sides of the Durand Line, the states have maintained minimal intervention in terms of creating the resources necessary for the local people to be able to generate a basic income.

This lack of a state economy and authority makes smuggling easy. Furthermore, it is common for those living in wide-open areas to be involved in the transport of goods. It should be noted that the other main economic activity here is animal husbandry. People living close to the Durand Line carry out small cross-border trade and sustain their families quite comfortably. Remittance economy is another source of income for the tribal people who work as laborers in Gulf countries.

In fact, the Soviet invasion of Afghanistan in 1979 added a new dimension to the destiny of the tribal regions. As Akbar Salahuddin Ahmed, a Pakistani-American academic, author, and former diplomat noticed, modern weapons appeared in the region and smuggling them became the most lucrative trade. It also created the new business of drug trafficking in the region. The smuggling and transportation of sophisticated weapons and drug trafficking replaced the semi-agrarian and barter trade economy of the tribal people of Afghanistan and Pakistan.

In the past two decades, the gradual weakening of the tribal code has put the region in a quandary. Many of the influential tribal elders have been assassinated and as a result the traditional jirgas (councils of elders) are incapable of settling conflicts in the area. Wahid claims that the absence of an effective political administration or military structure in the tribal belt has made the situation worse. Currently, religious devotees carry the sway and the old system of the Pashtunwali has almost vanished. After the fencing of the Durand Line by Pakistan’s army and the enforcement of a visa regime by both Kabul and Islamabad, the constraints of the local people have grown manifold with no solution in sight in the near future.

And yet, the people in the tribal belt of Afghanistan and Pakistan still define their land as a “terrain of resistance,” a term coined by the journalist Paul Routledge, and insist on operating in a world which is not constrained by state lines.

Faiz Muhammad Zaland is Assistant Professor at Kabul University. He is a Kabul-based political commentator, Afghanistan.