The Hindu nationalist Indian government and its supporters accused the Indian team’s only Muslim player, Mohammad Shami, of accepting bribes to throw the game for Pakistan. 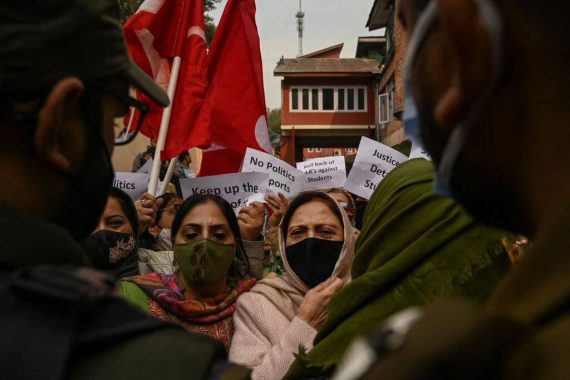 Activists from National Conference Women's wing take part in a protest held in Srinagar on November 1, 2021 demanding the relevant authorities to roll back FIR's (First Information Report) filed with the Police against students who were celebrating Pakistan cricket team's win in the ICC mens Twenty20 World Cup match against India. Photo by Tauseef Mustafa, AFP via Getty Images

Pakistan entered the ICC T-20 World Cup with a least than ideal preparation, after both the England and New Zealand cricket teams cancelled their respective tours to the country in September, citing “security concerns,” thus depriving the Green Shirts of a much-needed tune up on the eve of the white ball tournament in the United Arab Emirates.

On Sunday evening, however, Pakistan shocked the world by upstaging its perennial foe and tournament favourite – India– in a match played before a packed Dubai International Cricket Stadium and a television audience surpassing one billion people.

If cricket perfection is attainable, then Pakistan came within a whisker of it in securing an impossible to better 10-wicket victory, which was delivered on the back of Shaheen Sha Afridi’s blistering speed and mercurial guile, along with the batting precision, elegance and brutality of Babar Azam and Mohammad Rizwan.

Despite his team’s humiliating defeat, Indian captain Virat Kolhi gave a masterclass in accepting loss with graciousness and humility, heaping praise on his opponents for their professionalism and performance, saying, “They definitely outplayed us. There’s no doubt about that.”

The response from the Hindu nationalist Indian government and its supporters would strike a decisively different tone, however, with the Indian team’s only Muslim player, Mohammad Shami, targeted with hate and accusations of accepting bribes to throw the game for Pakistan.

“Sir how much money did you receive to help your community [Muslims] win?” asked a follower on Shami’s Instagram page, where others accused him of being a “Pakistani,” “traitor,” and “sell out.”

“After the match ended, a group of nearly 20 goons gathered outside our hostel,” a Kashmiri student studying in a college in India’s Punjab state told Al Jazeera. “We had never seen those faces and had no idea who they were. They had sticks and they beat up three of my friends. I was afraid and didn’t leave the room.”

What we are witnessing is the radicalization of Indian society, from top to bottom, at the hands of pernicious Hindutva forces, including the country’s ruling party – Bharatiya Janata Party – which has somehow convinced much of the population that roughly 800 million Hindus are subservient to or under threat from 200 million Muslims, a fear manufactured in hate speech, disinformation and conspiracy theories.

While it’s tempting to dismiss the newly minted “Cricket Jihad” conspiracy as the mutterings and ramblings of a nation overflowing with bigoted, sore losers, the reality is far more sinister, with the Indian government using Pakistan’s victory on the cricket pitch to wage yet another violent and anti-democratic crackdown on Muslims in India and Kashmir.

On Wednesday, police in India’s largest state – Uttar Pradesh – charged seven Muslims, but taking four of them into custody, for allegedly “raising Pro-Pak slogans or celebrating Pakistan’s victory over India in the T20 Cricket World Cup match that took place on Oct 24,” according to a brief from Chief Minister’s Office.

A school teacher in Rajasthan’s Udaipur city was not only arrested for sharing a celebratory post on WhatsApp following Pakistan’s win over India, but also was charged and arrested by police, before being later released on bail.

In Indian administered Kashmir, two medical students from two separate medical colleges were also arrested after being charged under the draconian anti-terror law Unlawful Activities Prevention Act (UAPA) for causing “insult to the national sentiment during the cricket match.” They now join more than 2,300 other Kashmiri Muslims who have been detained under UAPA law since the Indian government stripped the disputed territory of its semi-autonomous status on August 5, 2019.

On Thursday, three Kashmir students in Agra, Uttar Pradesh were physically assaulted by a mob of Hindu nationalist thugs in the company of police as they were being brought before a court to face sedition charges in relation to celebrating Pakistan’s victory over India at T20 World Cup.

On the other side of the sub-continent, Hindu nationalists, led by militant Hindutva organizations Vishwa Hindu Parishad (VHP) and Rashtriya Swayamsevak Sangh (RSS), carried out their sixth consecutive day of violence against Muslims in the north-eastern state of Tripura on Tuesday, the day Pakistan defeated New Zealand in its second match of the World Cup tournament.

The Indian government has not only refused to condemn violent attacks against Muslims and the destruction of more than a dozen mosques and hundreds of homes in Tripura, but also has done nothing to halt the violence and little to arrest the perpetrators, thus signalling its tacit support for terrorism against the religious minority.

With the Indian economy worsening, and producing rising levels of unemployment and poverty, Prime Minister Narendra Modi and the party he leads – Bharatiya Janita Party – have “fallen back on supremacist policies to deflect attention and evade responsibility,” observes Debasish Roy Chowdhury, co-author of To Kill a Democracy: India’s Passage to Despotism.

“To keep winning elections, it needs to keep polarizing Hindu voters against Muslims, and spinning ever more outrageous campaigns to demonize Muslims,” he says, which has contributed to the mass radicalization of the Hindu majority and downgrading of the country’s secular democracy.

In fact, almost nothing remains sacred secular space in Modi’s India, not even the dressing room of the Indian national cricket team, with legendary opening batsman Virender Sehwag, who retired in 2013 with nearly 9,000 Test runs, inferring condemnation of Kashmiris celebrating Pakistan’s win, while bemoaning the banning of fireworks during a Hindu festival in a tweet posted on 25 October, 2021.

More revealing is that neither the current Indian cricket captain Virat Kohli nor senior members of the squad have come forward to publicly defend their besieged Muslim teammate, Mohammad Shami.

International sporting events, including ICC T20 World Cup, typically encourage and ferment solidarity and unity within participating countries. For India, however, it has done nothing but reveal the Hindu majority’s growing hatred of Muslims and other religious minorities.