Now the Modi government’s actions and rhetoric, particularly as they apply to Muslims, is under a level of global scrutiny like never before. 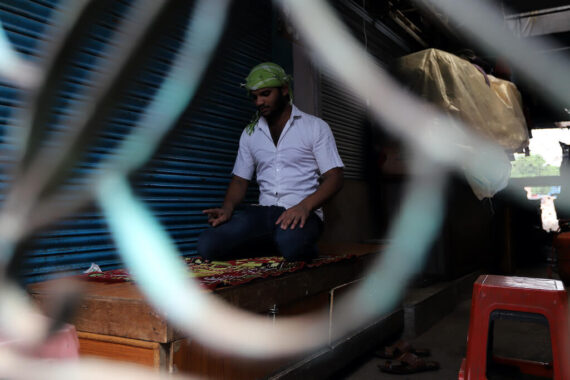 A shopkeeper performs a prayer in a closed market on the holy month of Ramadan during an extended lockdown to curb the spreading of the coronavirus (COVID-19) pandemic in the old quarters of Delhi, India on May 03, 2020. Photo by Amarjeet Kumar Singh. Anadolu Agency.

For much of the past seven years, the international community has stood on the sidelines as a passive onlooker as Indian Prime Minister Narendra Modi, and the Bharatiya Janata Party (BJP) he leads, ratches up telegraphed efforts to eradicate and annihilate the country’s 200 million Muslims.

The United Nations, Western democracies and even the Organization of Islamic Cooperation (OIC) each turned a blind eye and deaf ear to a speech given by then BJP president and current Home Affairs Minister Amit Shah in 2019, whereby he vowed to “remove every single infiltrator from the country, except Buddhists, Hindus and Sikhs.”

When the Indian government suddenly stripped Kashmir of its semi-autonomous status by undemocratically revoking Articles 370 and 35A of the Constitution on August 5, 2019, with the unmistakable intent of changing the disputed territory’s Muslim majority demography, it barely caused a ripple outside of Pakistan.

Equally ignored are the country’s year-on-year upward spike in anti-Muslim hate crimes, efforts to strip Muslims of their civil and democratic rights, including the Citizenship Amendment Act, National Register of Citizens, and so-called anti-Love Jihad laws, and nationwide calls for genocide among members of India’s ruling party or its closely held allies.

But when video emerged of a Hindu photographer jumping up and down triumphantly on a lifeless Muslim man, who had been shot and killed seconds earlier by a throng of police officers during an eviction drive in Assam’s Darrang district on September 25, the international community suddenly sprang to attention.

This was the moment the international community witnessed the Indian government cross the proverbial Rubicon River, a point of no turning back from what appears to be an irreversible slide towards genocide. The world now had footage to match a warning made two years ago by Dr. Gregory Stanton, founder of Genocide Watch, when he said, “Preparation for a genocide is definitely underway in India.”

“The persecution of Muslims in Assam and Kashmir is the state before genocide. The next stage is extermination – that’s what we call a genocide.”

The world not only witnessed this single act of brutality against a defenseless Muslim man, but also the violent eviction of 1,300 Muslim migrants, along with the destruction of 800 homes and several mosques in the village of Sipajhar, Assam during that same week, prompting an unprecedented level of global condemnation against the Indian government.

On October 7, the Organization of Islamic Cooperation, which represents the interests of 57 Muslim majority countries, condemned “the systematic persecution and violence ramping up against the Muslim community in Assam, India, which has claimed the lives of Muslims, during protests against an eviction drive of hundreds of Muslim families from the state.”

VIDEO: A Muslim Holocaust in India and Kashmir Looms

Oman’s Grand Mufti Sheikh Ahmed Al Khalili, who’s widely regarded as one of the most influential clerics in the Middle East, put out a statement accusing the Indian government of “blatant aggression” against Muslims,” and called on Muslim counties to stand united against it.

There does, however, appear to be a global awakening towards the persecution of Indian Muslims, with the hashtags “India Kills Muslims,” “Indian Muslims Under Attack” and “Boycott Indian Products” trending on social media in Arab and Asian countries, alike.

Whether this evolves into something akin to the Boycott, Divestment and Sanction (BDS) movement against Israel remains to be seen, but what’s clear for now the Modi government’s actions and rhetoric, particularly as they apply to Muslims, is under a level of global scrutiny like never before.

When he became the first Indian prime minister to not be received at the porch of the White House by either the U.S. President or First Lady, which was widely interpreted a diplomatic rebuttal of his government’s human rights violations in Assam and Kashmir, a cold chill could be felt throughout the Indian parliament.

This chill made ever frostier by the recent hosting of the first ever major online conference on Hindutva in the United States, which saw faculty members and students from more than 53 universities, including Harvard and Stanford, come together with the objective of “Dismantling Global Hindutva.”

With growing international pressure and condemnation, along with a continued worsening of the economy, with unemployment and poverty levels rising to their highest levels in more than a decade, Modi needs something, anything that simultaneously throws the global community off his back and keeps Hindu voters polarized against Muslims.

This diversion came tragically, but politically opportunistically for the Modi government when members of a hitherto unknown militant group – the Resistant Front – were alleged to have assassinated two school teachers and a businessman in Indian occupied Kashmir on October 7.

A statement issued by the group said the targets were killed because they were “non-local Hindutva agents” and “government informers.” Indian security forces claim, without evidence, the militant group works under the orders of a “handler in Pakistan,” providing the pretext for a military crackdown in the disputed territory, which has already resulted in the arrests of more than 700 Kashmiri Muslims accused of being “terrorist sympathizers.”

Once again, the Indian government and its allies in the mainstream media are manufacturing a moral panic over alleged “Islamist” and “Pakistani” militant attacks in Kashmir to frame Muslims, writ large, the referent object in national security discourse in order to shift global attention away from its discriminatory policies, and domestic attention away from its economic failures.

This ploy may have delivered success for Modi and BJP in the past, but all tricks and slight of hands have an eventual expiry date, typically the moment they become obvious to the naked eye.