Sooner or later, all Balkan countries will likely find themselves on the western side of a new Iron Curtain. 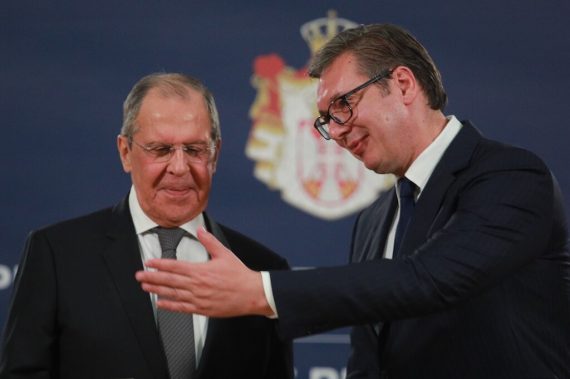 The Russian invasion of Ukraine will have a tremendous impact on all European countries. Nations that are heavily dependent on Russian energy are expected to suffer particularly hard if the Kremlin, for whatever reason, eventually halts gas supplies to Europe. What will be the implications of the Russo-Ukrainian war in the Balkans?

Hundreds of thousands of Ukrainian refugees have already entered the European Union. It is believed that more than seven million people will soon be forced to leave the war-torn country and go westward. Not all of them are expected to stay in the EU member states. According to reports, a few hundred displaced people from Ukraine have already arrived in Serbia – a Balkan nation that played a significant role during the 2015-2017 migrant and refugee crisis. The country’s officials estimate that the southeastern European country will eventually host more than 10,000 refugees from Ukraine.

Serbia, as well as other Balkan nations, is facing a large-scale emigration and brain drain. A significant influx of refugees from Ukraine could potentially reduce the consequence of a mass exodus that the so-called Western Balkans has been witnessing for years. It is highly uncertain, however, if displaced Ukrainian citizens have a desire to settle permanently in the region, or if they see the Balkans only as a temporarily shelter from the tragic events in Ukraine.

Politically, all Balkan nations that are not members of the European Union have already voiced their support for Ukraine’s territorially integrity, either voluntarily or under pressure from Brussels. The only country that has still not imposed any sanctions on the Russian Federation is Serbia. Moreover, to this day, Air Serbia continues to fly to Russia, being one of a few European carriers allowed to operate in Russian airspace.

Belgrade relies on Russia for its energy needs, and has developed close political relations with Moscow. At the same time, there are reports suggesting that the EU is demanding that Serbia immediately harmonize its foreign policy with that of Brussels, which means joining anti-Russian sanctions.

“Serbia is in an exceptionally difficult situation, there is less understanding than ever for the position of our nation. We are facing huge pressure,” said the country’s president Aleksandar Vučić.

The additional problem for Serbia is that the country is scheduled to hold general elections on April 3, and the vast majority of the ruling Serbian Progressive Party voters have a strong pro-Russian sentiment. Thus, unless the EU and the United States issue a de facto ultimatum to Belgrade, Serbia is unlikely to impose sanctions on Russia until after the elections.

For now, Belgrade is attempting to balance its good relations with Moscow and its ambitions to join the EU. Geography also plays a role here, given that the country is surrounded by EU and NATO members. Serbia and Bosnia and Herzegovina are the only two former Yugoslav republics that are still not part of the U.S.-led military alliance, although Sarajevo, unlike Belgrade, has reportedly joined the anti-Russian sanctions.

Still, Milorad Dodik, the Serb member of the Presidency of Bosnia and Herzegovina, claims that he was not informed about Bosnia’s tripartite presidency decision to impose sanctions on Russia. There are fears in the West that Russia could use Dodik – who insists that Bosnia and Herzegovina should remain neutral when it comes to the Russia-Ukraine conflict – to destabilize the situation in the country.

On the other hand, there are rumors that Vučić could eventually help the West remove Dodik from power, which would apparently result in the reduction of the Russian influence in the Balkans.

In reality, Russian political and economic influence in the Balkans is not nearly as strong as many Western pundits tend to portray it. The Kremlin effectively controls sections of Serbia’s and Bosnia’s energy sectors. Russia’s Zarubezhneft owns oil refineries in the towns of Brod and Modriča in Republika Srpska – one of two entities of Bosnia and Herzegovina – while Russian state-owned energy giant Gazprom owns 51 percent of shares in Serbia’s NIS (Petroleum Industry of Serbia). In addition, in December 2021, NIS became the major shareholder in Serbia’s leading petrochemicals producer, HIP Petrohemija.

The problem for the Balkans is that many countries in the region remain heavily dependent on Russian energy.

Until recently, Russia’s Sberbank was operating in both Serbia and Bosnia and Herzegovina, but on February 28, the banking agencies of Bosnia’s two entities took control of the two local Sberbank subsidiaries. On the very same day, Serbian AIK Bank completed the process of acquisition of Sberbank Serbia, which will additionally reduce Russian economic presence in the region.

The problem for the Balkans, however, is that many countries in the region remain heavily dependent on Russian energy. Serbia, Bulgaria, Bosnia and Herzegovina, and North Macedonia are reportedly 100 percent dependent on Russian natural gas. Croatia, on the other hand, has been purchasing liquefied natural gas from other producers – namely the United States, Nigeria, and Qatar – which to a certain extent could play a role in the process of cutting reliance on Russian energy.

However, the war in Ukraine could have an impact on a deal that Gazprom signed with Croatia and Hungary on deliveries of natural gas via the TurkStream pipeline. In other words, if the conflict in Ukraine turns into a wider “energy war” between Russia and the West, and Moscow eventually stops selling gas to Europe – be it as a potential retaliation to the anti-Western sanctions, or as a result of the EU’s potential decision to stop buying Russian gas – the Balkan countries will undoubtedly face severe disruptions in energy supplies.

In November, Russian President Vladimir Putin agreed to peg Serbia’s current gas price of $270 until May. But after that, if Serbia joins anti-Russian sanctions, the country will unlikely be able to purchase natural gas from Russia below the market price, which is currently above $3,000 per thousand cubic meters, and has reached its historic maximum. In the short term, it will be very difficult, if not impossible, for Balkan and other European countries to find an alternative to the Russian energy, which means that blackouts in Europe could eventually become a norm.

For now, both Russia and the EU are expected to refrain from such radical actions, given their mutual energy dependence. Politically, however, the process of “decoupling” between Moscow and the West has already gone very far, and sooner or later, all Balkan countries will likely find themselves on the western side of a new Iron Curtain.