The effects of climate change increasingly seep through our daily lives, even for the more privileged. 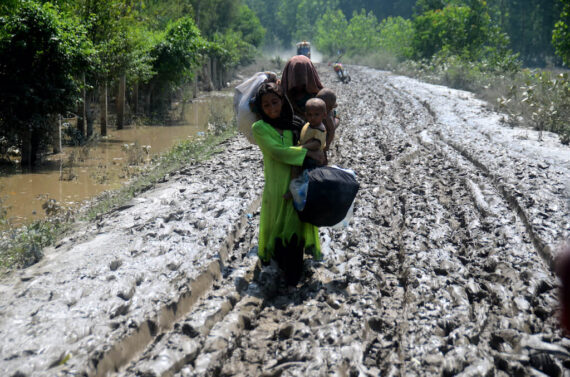 General view of a flooded area as displaced people are seen trying to survive following the deadly climate catastrophe in Peshawar, Khyber Pakhtunkhwa, Pakistan on August 31, 2022. Photo by Anadolu Images

he summer of 2022 hit the world rather harshly. Wildfires and unusually scorching heat often followed by flash floods in different parts of the world have become a common occurrence. The effects of climate change become more tangible and destructive for all, yet the series of disasters highlight distinctive challenges for each region.

The effects of the drought are detrimental to trade, transport, water and food supply, and energy generation. Major rivers like the Rhine, Danube, Loire, and Po have seen a significant fall in water levels while the current dry spell is expected to last several more months.

According to the European Commission’s European Drought Observatory, 47% of the continent is experiencing a significant deficit of soil moisture, while an additional 17% is at an alert state.

All this leaves Europe in a position where it must juggle energy and water issues. In France, rivers that are used to cool nuclear reactors have reached alarming temperatures. The water used in the process is returned to the river at a higher temperature, potentially harming wildlife.

In Africa, the effects of natural disaster and climate change have led to mass migration and starvation. A World Bank report predicts that by 2050, around 86 million people in sub-Saharan Africa and 19 million in North Africa could become internal migrants due to climate shocks such as heatwaves and drought, storms, and major flooding.

Following four consecutive years of below average rainfall, the Horn of Africa is experiencing the worst drought in 40 years. The drought has devastating effects on farming. Millions of livestock have perished while failed harvests have resulted in a drop of food production. The region remains vulnerable as its economy heavily depends on agriculture.

Combined with armed conflicts, rising food and fuel prices, and the impact of COVID19, the climate crisis leaves 1.5 million persons in the region displaced according to the UNHCR. The situation in Ethiopia, Somalia, and parts of Kenya continues to worsen. Since January, over 200 children died from malnutrition in Somalia alone.

Across the Sahel region, water availability has dropped more than 40% over the past 20 years mainly due to climate change.

In April, intense rains hit South Africa causing floods and landslides across the provinces of KwaZulu-Natal and the Eastern Cape. More than 400 people died as a result of floods, making it one of South Africa’s deadliest disasters this century.

Extreme and unpredictable weather tests the resilience of Asian countries. Asia is diverse, with differing geography, population, and capabilities to respond to climate change. It also has two of the most populated countries in the world, India and China, exposing more people to potential damage.

In Pakistan, the “monsoon on steroids” caused major floods after heavy rain. Around 33 million people were affected and over 1,000 people were killed. Many have lost all their possessions and have been left homeless. In the earlier months, neighboring India and Bangladesh were hit by floods from the monsoon season that came earlier than expected.

China is seeing record-breaking temperatures that sparked wildfires in its southwestern region. Cities in the south are experiencing a major drought that has dried up the rivers that cities use for hydropower, the world’s third longest river, Yangtze, among them. The river is a water source for 600 million people.

Local officials have suspended the supply of hydropower to some companies and factories, shutting down industries. China’s power crunch threatens supplies of everything from metals to food, and also is slowing down global business.

The many cases of flooding we have seen this summer came after droughts. This is because a prolonged period of drought changes the nature of the soil.

Drought-hit land becomes vulnerable to flooding. As soil dries up and hardens, it loses its porosity and therefore, its ability to absorb the rain.

As many countries hit their highest-ever recorded temperatures this year, the picture comes as no surprise. The effects of climate change increasingly seep through our daily lives, even for the more privileged.