Defending civilians against the brutality of the Assad regime and his allies should not only be Turkey’s responsibility. The international community, including the U.S., has great responsibilities to carry in this particular matter as well. 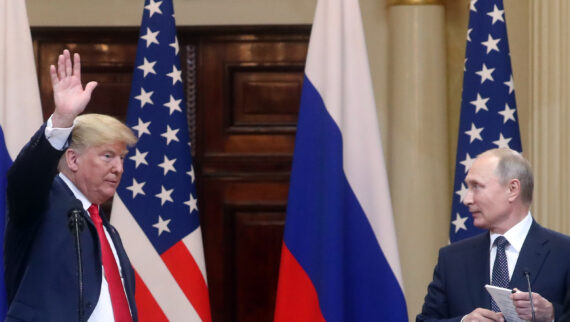 On September 7, the leaders of Turkey, Russia, and Iran met in Tehran to discuss the Syrian issue with Idlib being the most important topic on the agenda. The organizers broadcasted the whole summit, which allowed us to witness a kind of a televised argument in which Erdogan ceased the moment to ask Putin and Rouhani for a ceasefire in Idlib. Basically, what the Turkish side was trying to achieve is to spare lives of more than 3.5 million civilians in the province from the Assad regime’s aggression, and buy some time to solve the problem.

During the summit, Turkey’s President highlighted his country’s grave concerns and sensitivities towards the issue. If a major assault is to be launched against the Syrian province, the humanitarian catastrophe will be big and Turkey, with its maximum capacity being utilized to support refugees, will not have more room to deal with it. Stressing the importance of Idlib, the Turkish side clearly said that it is a matter of national security and will not leave the city.

President Erdogan may not have fully succeeded in convincing both leaders to halt the military operation; however, the political showdown uncovered in the summit shed light on the different agendas, interests, and priorities of Turkey, Russia and Iran. If we add the U.S. to the mix, then it would be safe to assume that the way the Idlib dilemma is going to be handled will have a profound impact on the power game evolving in Syria and on its future.

Despite the unlimited support the Syrian regime is getting from Moscow and Tehran, Assad is still less than a decision maker in his country’s affairs. By defeating the opposition and taking over their last stronghold Idlib, Assad’s allies want to guarantee his regime a better position in the political process, boost the efforts to extend its control over Syria, and expedite the ongoing proceeding to re-legitimatize it as a de-facto ruler for the whole country.

Although in a very unfavorable position vis-à-vis the Russia-Iran-Assad axis from one side, the U.S.- SDF/ PYD /YPG axis from another, Turkey –as clearly reflected by the Tehran summit– is the only country which is still actively defying Assad in public and behind closed doors. In this sense, Ankara is seen as an obstacle that needs to be neutralized if not completely removed from Idlib.

Unlike other times where Russia conceded for Turkey, things seem to be a little bit different now. Aware of Ankara’s critical position, Putin insisted on his stance, refused to include “ceasefire” in the text and showed support for the assault against the province with the pretext of the presence of terrorist organizations. After the summit, Assad and Russia intensified their aerial bombardment giving a clear sign that a land assault is near.

The situation will harshly test Ankara–Moscow relations in Syria and how both of them will cope with the coming developments and challenges there. A major assault on Idlib is expected to create a humanitarian catastrophe and trigger flows of refugees towards the Turkish borders. This will increase the political, economic, and security pressure on Ankara, but most importantly will hinder its credibility as a guarantor in the eyes of the Syrian opposition. The direct result will likely be the end of the Astana process and the breakdown of the trilateral mechanism with further implications to come.

Thus, by ignoring Turkey’s critical points and concerns, Moscow not only risks undermining its understandings with Ankara, but also endangers the fate of the political process in a way that will likely make a sustainable solution in Syria impossible. Taking into consideration that, without Turkey, there can be no serious progress on the coming non-military challenges (constitutional law, preparing for elections, construction….etc), Russia would be shooting itself in the foot if it insists on a full scale military assault on Idlib.

Moscow needs to understand very well the risks arising from such a scenario and that without taking Ankara’s concerns into account, it might win the war but it will never win peace. If decision makers in Russia are fully aware of this point, then there will be still a slim chance to halt the military operation or at least downsize it to a limited operation.

To be sure, everyone except Turkey, seems to be agreeing on the military operation in a way or another including the U.S. While Russia and Iran are in a rush to achieve the above-stated goals and consolidate Assad’s power, Washington made it clear that its only concern is the use of chemical weapons. Last week, U.S. ambassador to the UN said at a UN press conference, “If they – Assad and his allies- want to continue to go the route of taking over Syria, they can do that, but they cannot do it with chemical weapons.”

Just five months ago, U.S. President Trump stressed that he wanted to withdraw from Syria and bring his troops back home. Now Trump has agreed to a new strategy that indefinitely extends the military effort to ensure the departure of Iran and its proxy forces, the “enduring defeat” of Daesh (IS), the establishment of a stable, nonthreatening government acceptable to all Syrians and the international community.

Yet, allowing Assad to kill civilians, take over Idlib, and extend his control over more territories with the help of Iran and Russia will run against the freshly stated goals of Washington’s new policy in Syria. It will be hard to imagine that the U.S. will be able stay in Syria indefinitely, prevent the emergence of terrorists, and drive Iran out of the country if Assad is going to consolidate his powers. In this context, the U.S. has an interest in stopping the imminent military assault on Idlib and can work with Turkey on this issue for their mutual benefit.

Americans have always complained lately about the Turkish-Russian cooperation. It should be kept in mind that Ankara is working with Moscow in Syria after it was on the verge of war with it at the end of 2015 because the U.S. decided to downsize itself and make alliance with a franchise branch of the PKK in Syria, thus constantly working against Turkey’s national security.

Currently, disagreements with Russia and Iran on Idlib are visible. Turkey, a NATO ally, is saying it will stand its ground amid the imminent military assault of Assad and his allies on the city. However, since the balance of power is not in Turkey’s favor versus Assad, Iran and Russia, the U.S. can step in to defend Ankara, not only politically but militarily if needed. When they have the will, Americans proved that they can act. They defended the PYD against Assad, they defended themselves against Russian mercenaries without the pretext that such a lethal engagement will lead to a total war.

Another option on U.S.-Turkey cooperation in this matter can be explored too. U.S. officials can offer valuable intelligence information that might help Ankara convince Moscow that there is a more effective way to work on counterterrorism operation in Idlib rather than letting Assad and his allies take over the city with the pretext of fighting terrorism. This will not only raise Turkey’s chance to halt the operation but will serve Washington’s interest too.

If it were considered as a country, Idlib would have been the second country in hosting refugees. The Tehran summit proved that Ankara’s position to defend the civilians in Idlib against the Assad regime is not another PR strategy rather than an ethical position, which is constantly undermined by the imbalance of power. Defending civilians against the brutality of the Assad regime and his allies should not only be Turkey’s responsibility. The international community, including the U.S., has great responsibilities to carry in this particular matter as well.