In the Name of Democracy, Libya Must Postpone the Elections

Libya is rushing to elections without an election legislation. 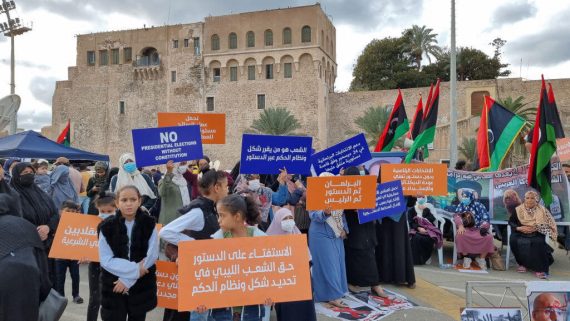 People gather at the Martyrs' Square in Libya's capital Tripoli on November 19, 2021, to protest against the candidacy Seif al-Islam Kadhafi, son of slain Libyan dictator Moamer Kadhafi to run in the country's December presidential polls. Photo by Mahmud Turkia, AFP via Getty Images

Time flies when it comes to the rapidly developing sequence of events in Libya. As of early 2021, there was an atmosphere that was regarded as promising for the first stage of elections in the country.

Fast-forward to December 24, and Libyan politics is debating how to have legitimate elections in order not to allow yet another tyranny in the war-torn country.

Representatives of around 30 countries arrived in Paris in November to discuss the recent political situation in Libya. Political actors such as the UK, Germany, Turkey, and Italy emphasized the need for a consensus on election law while France and Egypt are obsessed with having an election as soon as possible.

Due to the election laws unilaterally issued by the Aguila Saleh-led House of Representatives, Khalifa Haftar could now run for Libya’s presidency. The laws issued by Saleh have not been voted and passed in the parliament. Moreover, dual citizens, war criminals, and people who hold military posts are not permitted to run for the Libyan presidency, and Haftar faces several impediments to running for the elections.

The militias like al-Kaniyat, which is blacklisted by the United States and fought alongside Khalifa Haftar, have been accused of mass killings in Tarhuna. Haftar, who left his military post only a few months prior to the elections, is a U.S. citizen accused of war crimes and is currently on trial in the U.S. These conditions are against the declaration made by the Libyan Political Dialogue Forum (LPDF) formed under the sponsorship of the United Nations.

Aguila Saleh attempted to amend laws in order to render Haftar’s candidacy possible. This attempt was resisted by certain members of the House of Representatives who met in Tripoli on November 9 to protest together with others from the west, and to draw attention to the need for a constitutional basis and consensus through dialogue, negotiation, and mutual agreements.

Let’s not forget that Haftar is a person who didn’t allow the country’s UN-backed PM Abdul Hamid Dbeibah to land at Benina Airport in Benghazi, which is controlled by Haftar’s armed militias.

Imagine a country, where a would-be presidential candidate can arbitrarily prevent the top official from landing in one of the country’s airports! Could elections be fair and free in such as country? Unthinkable indeed.

To top it all off, the U.S. court, which is trying Haftar, joined Aguila Saleh in supporting the warlord by dropping several civil lawsuits against him until the end of elections.

Mere coincidence? Here comes another surprise: there are 2.8 million voters in Libya with almost 2 million residing in the west.

Everybody, including France and Egypt, knows the warlord cannot even get 10 percent of the votes if elections are held freely in Libya.

Furthermore, it seems, Haftar’s ambitions are such that he is even ready to destroy his long-term supporters, showing no mercy. According to rumors, Saleh’s wish to run for Libya’s presidency was refused by Haftar and Egypt recently.

Haftar threatened people in east Libya against supporting Saleh as a candidate to run for the presidency.

When Saleh insisted, Haftar threatened people in east Libya against supporting him as candidates are obliged to collect 5,000 signatures to run for the presidency. Sending a message to Saleh’s potential supporters, Haftar stated that anyone who signs Saleh’s candidacy will be jailed. Despite all this, in a surprising move, Saleh announced his candidacy.

The overwhelming majority of Libyan people and politicians first want to have a solid foundation for an electoral system – a constitutional law that will be reached through consensus. That’s why the laws announced by the House of Representatives are considered flawed.

Yes, Libya needs elections to erase the traces of the civil war and chaos, and to heal its wounds, but not by unilaterally imposing “laws” which favor a warlord rather than a civil authority.

It is not only the High Council of State that demands a delay in order to reach a mutually accepted consensus on electoral laws, but also the Government of National Unity officials and political figures in the west along with the members of Tobruk-based House of Representatives.

France is among the countries which have been supporting Haftar at all costs, and the conferences organized in Paris, in general, have been a tool in its attempt to remain a key actor.

Nonetheless, even some of the Western participants of the most recent Paris Conference on Libya in November emphasized the need for change in election law.

Elections per se cannot enable Libya to rebuild its war-torn soul, but free, fair, and legitimate elections based on equitable laws can. And delaying elections to have a free and fair election is much better than having a flawed one.

Libya has been waiting for stability for more than a decade – the missed time can be tolerated, but the destruction of the efforts that have been made in this time cannot.

Every single actor knows very well that under these circumstances, the December 24 elections will bring war rather than a prosperous Libya as the country has become a land where figures like Haftar, Saif Gaddafi, and Aguila Saleh can run for the presidency.

Such elections can trigger another civil war. If Haftar is elected, France and Egypt might accept his rule, but the Libyan people and politicians might not. Also consider the present election process that encourages even Gaddafi’s son to make his return. Let’s remember that if the elections are held immediately, the votes will be counted by the militias and mercenaries in some parts of the country. So, fraud and gerrymandering are highly likely.

A recently conducted poll on the upcoming elections has showed that Haftar and Gaddafi have no chance against Dbeibah under a free and fair electoral process. Haftar has no chance even if he only competes against Saif Gaddafi.

While talking to Libyan politicians, I’ve also heard that even the head of Libya’s High National Elections Commission has secret ties with France. Amid lack of reliability, security concerns and the dark relationships of such figures, the long-awaited elections in Libya might end up in a complete loss of control in the war-torn country.

Khalifa Haftar and his cohorts, who have been conducting a brutal war against the UN-backed actors, civilians, and Libyans themselves, should have no place in the future of Libya. For all the above reasons, the elections in Libya must be delayed. First, Libya needs parliamentary elections a well-founded legislative framework if democracy is really the goal. 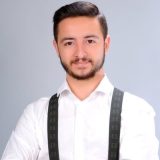 Ufuk Necat Tasci is a PhD candidate in international relations at Istanbul Medeniyet University. His research focuses on the new forms of war, proxy wars, and surrogate warfare in Libya in the post-Gaddafi era.

Also Read
How did Haftar Gain his Way to Tripoli? The Libyan Crisis and the Role of International Actors