Even though India and Pakistan occasionally show goodwill to improve ties, lack of trust remains as the biggest obstacle to the peaceful resolution of decades-old controversies. 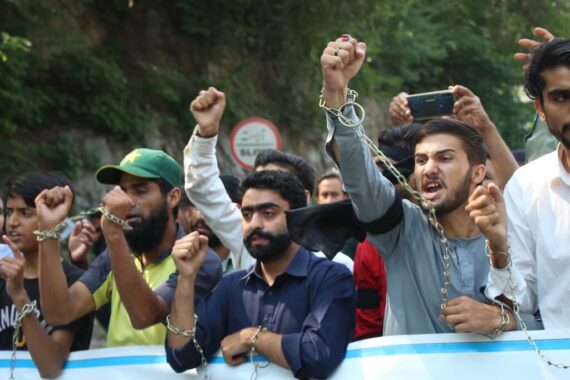 Pakistanis protest against the Indian government's move to revoke the special autonomy of Jammu and Kashmir guaranteed under Article 370, wearing chains in their hands, in front of the United Nations Military Observer Office on Exploitation day in Muzaffarabad, Pakistan on August 5, 2020. Photo by Naseer Chaudary. Anadolu Agency.

On March 23, when Pakistan annually commemorates Pakistan Resolution Day, also known as Lahore Resolution Day, Narendra Modi, the prime minister of India, sent a letter to his counterpart Imran Khan, the prime minister of Pakistan, in which he greeted Pakistani people and stated, “India, as a neighboring country, desires cordial relations with the people of Pakistan. For this, an environment of trust, devoid of terror and hostility, is imperative.” He also expressed his appreciation of Pakistanis’ efforts to tackle the COVID-19 pandemic.

Khan took the initiative to thank Modi for his wishes. He was quoted as saying, “We are convinced that durable peace and stability in South Asia is contingent upon resolving all outstanding issues between India and Pakistan, in particular, the Jammu and Kashmir dispute.” Since then, there has been much skepticism as to what this reconciliation really means. Were bilateral relations really improving or were there hidden games being played?

In addition, Pakistanis have been expressing solidarity with India since the COVID-19 outbreak began to get out of control in India. A couple of days ago, hashtags like Pakistan stands with India and India needs oxygen were trending in Pakistani social media. On April 23, Faisal Edhi, chairman of Edhi Foundation, Pakistan’s top non-profit social welfare organization, penned a letter to Modi and offered unconditional humanitarian aid to India including a fleet of 50 ambulances to tackle the devastated health sector.

Apart from the letter commemorating Pakistan Resolution Day, India’s prime minister also wished Khan good health after he contracted the COVID-19 virus in March. He tweeted, “Best wishes to PM Imran Khan for a speedy recovery.” Furthermore, in February 2021, military commanders of both countries decided to respect the ceasefire agreement signed in 2003. The deal was brokered with the assistance of the UAE.

This extraordinary step can lead to a more comprehensive road map through which the two belligerents can rebuild their relations, which have been torn for decades, through diplomacy. Unfortunately, on May 3, 2021, cross-border firing occurred along the International Border (IB) in Jammu and Kashmir, and both states accused each other of violating the fresh ceasefire agreement.

Later in February, the Indian government gave permission to Khan’s airplane to use its airspace during his two-day official visit to Sri Lanka. There are also rumors pertaining to secret peace talks going on between Pakistan and India in the UAE to normalize the relations. However, while speaking to TRT’s “The Newsmakers” on April 23, Shah Mahmood Qureshi, Pakistan’s foreign minister, denied the rumors by saying: “At present, there is no such secret meetings and the UAE is not involved in brokering peace talks between India and Pakistan.”

In mid-March 2021, General Qamar Javed Bajwa, Pakistan’s chief of the army staff (COAS), while addressing an audience at the Islamabad Security Dialogue forum spoke of the gradually developing India-Pakistan ties.

In mid-March 2021, General Qamar Javed Bajwa, Pakistan’s chief of the army staff (COAS), while addressing an audience at the Islamabad Security Dialogue forum spoke of the gradually developing India-Pakistan ties by saying, “Let’s bury the past and move forward. Our neighbor will have to create a conducive environment.” He added that stable bilateral relations are necessary for a long-lasting peace in South Asia. He referred to the Kashmir issue by saying, “The Kashmir issue is obviously at the heart of this. It is important to understand that without the resolution of the Kashmir dispute through peaceful means, the process of subcontinental rapprochement will always remain susceptible to derailment due to politically motivated bellicosity.”

A seven-member delegation from Pakistan departed for India on March 22, 2021, for the annual talk on the Indus Water Treaty (IWT), which was signed in 1960. Both countries have been accusing the other of violating the treaty. After two years, dialogue channels were re-opened and a meeting took place on March 23-25, 2021, in which issues regarding Indus water sharing were discussed. On March 31, Pakistan also lifted a trade ban on cotton and sugar imports from India in order to resume trade; however, two days later, Khan decided to suspend trade. He said, “[There will be] [n]o trade with India under current circumstances unless India provides autonomy to Jammu and Kashmir.”

Since 2018, after Imran Khan assumed office, a backdoor diplomacy has been established between India and Pakistan. Even Khan himself, before being sworn into office in 2018, in order to deepen bilateral relations, said, “If India takes one step, we will take two.”

On November 9, 2019, Khan took a historical step towards the normalization of relations with India by inaugurating the Kartarpur Corridor. The corridor provides a visa-free border crossing and facilitates Indian Sikh pilgrims and devotees to visit their sacred shrine Gurdwara Darbar Sahib Kartarpur in Kartarpur, Pakistan. As a result, Khan was praised both regionally and internationally as the access to the holy shrine was complicated in the past due to the deterioration of bilateral relations.

Since 2018, after Imran Khan assumed office, a backdoor diplomacy has been established between India and Pakistan.

However, India has made some bellicose attempts which, in turn, pushed Khan to adopt an aggressive position. For example, in August 2019, India unilaterally and unconstitutionally scrapped the special status of Jammu and Kashmir by rebuking Article 370 of the Indian Constitution. The Pulwama attack and the Balakot airstrike took place afterward and elevated the tensions between the two nuclear states, which eventually cut off relations.

In 2019, India announced its intention to grant visas to athletes from all countries for participation in international sports events like the Olympics including Pakistani sportspersons without prejudice. This was seen as a positive step as in February 2019, India had refused to issue visas to a three-member Pakistani team which was on its way to participate in the ISSF World Cup Rifle/Pistol/Shotgun held in New Delhi.

Not everyone is convinced of the sincerity of the rapprochement efforts between India and Pakistan. Dr. Moeed Pirzada, a renowned journalist, geostrategic analyst, and political commentator, speaking at the Global Village Space (GVS), analyzed Khan’s positive approach towards Modi’s attempt to strengthen the bilateral relations with Pakistan. He said, “This is not a Pakistan-driven step, but a U.S.A.-India driven step. Pakistan will not benefit in the long term. The U.S. is pressuring India to approach Pakistan just for their national interests, to maintain its world supremacy and to ensure its leverage in South Asia. The U.S. is intended to contain China as its hegemony is under threat. As India is a member of the Quad (U.S., India, Japan, and Australia), the purpose of which is to contain China, India is the most effective ally of the U.S. to balance its power in the region.”

According to Pirzada, the recent move to resume trade ties between India and Pakistan is geostrategic in nature and not economic. India is trying to legitimize its decision of abrogating the special status of Jammu and Kashmir. In short, Pirzada argues that India has cleverly exploited Pakistan. Pakistan to maintain its legitimacy in the affairs of the China–Pakistan Economic Corridor (CPEC), to remove itself from the “Grey List” of the Financial Action Task Force (FATF), to reach a better settlement in Afghanistan, build good relations with the International Monetary Fund (IMF), and have access to trade in Central Asia.

India wants to strengthen its ties with its diaspora in the West, and particularly in the U.S., in order to rectify its image by making the world forget its unconstitutional moves like nullifying Article 370 of its constitution, the recent farmer protests, the passing of the anti-Muslim Citizen Amendment Act (CAA), etc.

The fundamental ideology of the latter opposes the existence of Pakistan as Pakistan came into being as an independent Muslim state. In other words, Modi’s gesture appears to be an explicitly ironic attempt as it is hard to expect positive greetings from a person who is a Hindu extremist. This unexpected approach points to some sort of conspiracy behind the rapprochement.

There is a general conviction among Pakistanis that India is compelled to take a defensive position and soften its relations with Pakistan as a consequence of Pakistan’s continued resistance against Indian incursions since February 2019, when the Pulwama attack took place. In the same month, the Pakistani Air Forces retaliated by downing two Indian aircraft. Pakistan captured the Indian Air Forces pilot Abhinandan Varthaman but released him the next day as a gesture of goodwill. This step was received with international appreciation.

On March 15, Harsh Vardhan Shringla, India’s foreign secretary, stated, “India derives healthy neighboring ties with Pakistan. However, a meaningful dialogue can only be held in a conductive atmosphere and the onus is on Islamabad to create it.” On the other hand, Khan stated, “We are trying, but India would have to take the first step and unless it does, we cannot move ahead.” These reciprocal statements show that even though both nations occasionally show goodwill to improve bilateral ties, lack of trust remains as the biggest obstacle to the peaceful resolution of decades-old controversies. 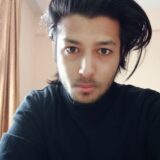