India is Lobbying to Put Pakistan on FATF's Black-list: Will it Succeed?

India is lobbying to keep Pakistan on the FATF list, which combats money laundering and supporting terrorism. The listing costs Pakistan billions a year. 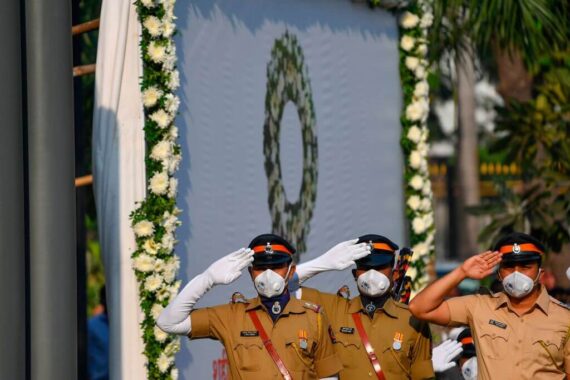 Policemen pay their respects at the Police Memorial during a ceremony commemorating the 12th anniversary of the 2008 Mumbai militant attacks, in Mumbai on November 26, 2020. - Islamist militants from Pakistan laid siege to India's financial capital Mumbai on November 2008 for three days, killing 166 people and injuring hundreds more. Photo by INDRANIL MUKHERJEE/AFP via Getty Images.

Relations between India and Pakistan are strained even at the best of times. But in recent years, since Prime Minister Narendra Modi’s Bharatiya Janata Party took power, the two countries have been constantly feuding on many fronts. Modi seems intent not only in stirring tension over India occupied Kashmir- a cause célèbre of his popular far-right base largely made up of Hindutva ideologues- but also in applying pressure on his rival within multinational forums in the one area where Islamabad suffers a serious weakness: containing non-state armed actors.

Pakistan’s problem with groups designated as terrorists is no secret. Having been the base for military operations that saw the Soviet Union defeated in Afghanistan in 1989 and, over a decade later in clashes with the West, during the US invasion of the Islamic Republic, which at the time was under Taliban rule, Pakistan has found it challenging, to say the least, in dealing with non-state armed groups and tribes that moved freely through its porous border.

Predictably India has exploited what is a major weak spot for Pakistan by lobbying to place its neighbor on the Financial Action Task Force (FATF) blacklist. The intergovernmental organization founded in 1989 on the initiative of the G7, plays a central role in global efforts in combatting terrorist financing. The Paris based organization has set global standards to combat terrorist financing. It also monitors a countries ability to prevent, detect, investigate and prosecute the financing of terrorism.

Once subjected to the FATF’s monitoring regime, a country can expect to face a tough time clearing its name. Since 2001 FATF has maintained a “Black-list,” containing the names of countries that the intragovernmental organization considers non-cooperative in the global effort to combat money laundering and the financing of terrorism.

While being grey-listed is not as harsh as being blacklisted, countries placed on the list may still face economic sanctions from institutions like the IMF and the World Bank and experience adverse effects on trade.

Only North Korea and Iran are in the current blacklist. It also keeps a “Grey-list.” These are countries that are at a higher risk of money laundering and terrorism financing but have formally committed to working with the FATF to develop action plans for what it calls anti-money laundering and countering the financing of terrorism (AML/CFT).

Both are living document, issued and updated periodically in official FATF reports. Blacklisted countries are highly likely to be subjected to economic sanctions, placed under prohibitive measures by FATF member states as well as international organizations. While being grey-listed is not as harsh as being blacklisted, countries placed on the list may still face economic sanctions from institutions like the IMF and the World Bank and experience adverse effects on trade.

Pakistan has been on the FATF grey-list since June 2018. It was put on notice to be blacklisted by October 2019 if the country failed to curb money laundering and terror financing. A 27 point action plan was also issued, demanding Islamabad to deliver successfully for it to avoid further punitive monitoring and for it to be granted unfettered access to the global financial networks.

VIDEO: Money laundering and terror financing: What is the FATF?

Ever since, Prime Minister Imran Khan has been in a race against time to avoid Pakistan’s inclusion in the FATF black-list. Seeking to wriggle out of the grey list, last year the country’s federal government imposed financial sanctions on 88 banned terror groups and their leaders, including the alleged mastermind of the 2008 Mumbai attack.

Khan has expressed deep unease over the potential consequences of Pakistan’s failure to deliver on the 27 point action-plan as much as he has been worried over opposition parties politicizing the issue. “Going on the blacklist would mean sanctions, our economy crashing; we were hoping opposition would jointly pass legislation for FATF because it’s for Pakistan, not [our] personal interest” Pakistan is reported saying following a round of voting on new domestic legislation designed to address the 27 point action-plan.

India accelerated its lobbying against Pakistan during the four-day virtual meeting of the FATF two months ago.

Measures adopted by Khan’s government has eased some of the pressure. In October last year, FATF said that Pakistan had successfully complied with 21 out of 27 points of the action plan but nonetheless it decided to keep the country on its grey list until February 2021. This was a decisive moment when things were expected to come to a head. India accelerated its lobbying against Pakistan during the four-day virtual meeting of the FATF two months ago.

“It’s not that Pakistan is not trying hard to get out of the grey list, but the lobbying against the country by India is very strong,” a Pakistani representative in the FATF was reported saying to Anadolu Agency. The official also pointed to a vast network of hundreds of “fake media” outlets serving “Indian interests”. The official cited a Brussels-based watchdog, EU DisinfoLab, which uncovered a network of 265 coordinated fake local media outlets in 65 countries “serving Indian interests” and “undermining Pakistan”, as well as multiple dubious think-tanks and NGOs.

India’s lobbying campaign also joined forces with the Armenian National Committee of America (ANCA) in what seemed to have been an attempt to inflate the terror menace emanating from Pakistan. The group alleged that Pakistan recruited terrorists to aid Azerbaijan and its ally Turkey in last year’s conflict with Armenia over the Nagorno-Karabakh enclave. Pakistan has denied such claims.

Details of the alliance uncovered by Foreign Lobby exposed the way in which ANCA was seeking to get support from the 4 million-strong Indian diaspora in its new campaign calling on the administration of U.S. President Joe Biden to sanction Pakistan as a terrorist financing state.

These efforts however have not produced the desired outcome India perhaps had hoped for, partly it is said due to the fact that since Islamabad’s inclusion in the grey-list three years ago, Pakistan has been assisted by Turkey, China, and Malaysia. Though it’s not clear if the three countries helped their ally in this case, Pakistan avoided sliding into the blacklist in February. FATF determined that Islamabad should remain on its grey-list, with the country’s status set to be reviewed at an extraordinary plenary session in June 2021.

At a press conference following the four-day virtual plenary meeting, FATF President Dr Marcus Pleyer said that Pakistan had made “significant progress” even though there remained some “serious deficiencies” in mechanisms to plug terrorism financing. Pakistan had fulfilled 24 out of the 27 actions points while the 3 remaining areas, said Pleyer “need to be fully addressed.” The FATF president noted that Pakistan was working towards its commitment made at a high level to implement the illicit financing watchdog’s recommendations, saying “that is not the time to put a country on the blacklist”.

Fortunately for Pakistan, India’s lobbying campaign has been somewhat toothless due to the good relationship it has with China. In fact prior to February’s plenary session India was said to have been “concerned” that China was going to up the ante in its support for Pakistan. The two countries have deepened co-operation over recent years and are said to enjoy “all-weather strategic co-operative partnership.”

While China’s relationship with India suffered a set-back over recent years with clashes in the disputed Sino-Indian border, during which at least 20 Indian troops are said to have been killed, Pakistan has become a major ally through the Belt and Road Initiative and the huge expansion of the Gwadar port. Strategically located in the southwestern coast of Balochistan, Pakistan, Gwadar will offer China direct access to the Arabian Sea.

Despite India’s lobbying, Pakistan is optimistic that it will be issued with a clean bill of health by the FATF. “If the watchdog still keeps Pakistan in the grey list in this review, we will surely get out in the next review expected to take place in the middle of this year,” the Pakistani representative in the FATF said following February’s virtual meeting. Judging by how close it came to fully delivering on the 27 point action-plan and the level of support from the allies like China, I think that’s a safe bet.

Nasim Ahmed is a political analyst. He publishes articles on a daily basis with the London based Middle East Monitor (MEMO) focusing in particular on Israel and Palestine and the Gulf region. He also hosts a regular show interviewing prominent authors and academics on topics related to the Middle East.