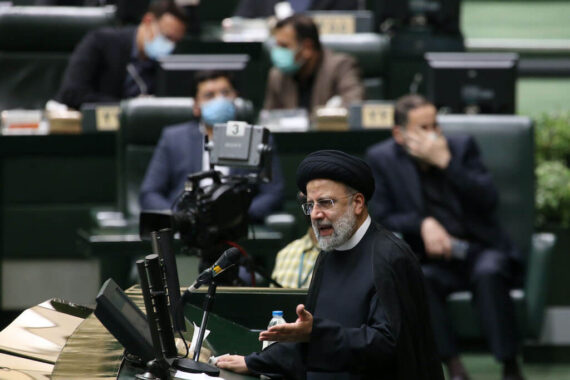 Iranian President Ebrahim Raisi speaks as he attends a parliament session to defend his choices for the ministerial posts in the capital Tehran, Iran on August 25, 2021. Photo by Fatemeh Bahrami, Anadolu Images

Ebrahim Raisi, ex-judiciary chief of Iran, has been elected as the new president in Iran’s June 2021 presidential elections. The 2021 elections were low key; economic hardship and fading public trust in government alienated people from the ballot boxes. Iran’s election turnout was the lowest since the Islamic Revolution in 1979. Many experts interpreted the low turnout as a sign of a legitimacy crisis for the Iranian regime.

With Raisi’s victory, reformists and moderates were wiped off the political scene. Conservatives have complete control over the legislative, executive, and judicial bodies. Hence, the Iranian political scene will be dominated by conservative elements for at least four years. In domestic politics, strict media control (especially on social media), limited political freedoms, and a colorless political life can be expected. In foreign policy, Iran will have breaks and continuities because of regional and global developments, and Raisi’s political orientation.

Based on the constitution of Iran, the president must consult on foreign policy issues with other institutions, assemblies, and senior officials. The parliament has a say on every domestic and foreign political matter. Specifically, the Iranian parliament’s National Security and Foreign Policy Committee is very active in foreign policy discussions. Furthermore, the Supreme National Security Council (SNSC) is one of the highest authorities that decides on Iran’s foreign policy. The Iranian president is the council’s natural chairman, and the council’s secretary is appointed by the supreme leader, Ali Khamenei.

Read: Debates Heat Up As Iranians Elect Their New President

Members of the SNSC are comprised of heads of the three branches of the government; the interior, foreign, and intelligence ministers; the chief of staff for the Armed Forces; the heads of the Army and the Revolutionary Guards Corps; relevant ministers; and other members appointed by the supreme leader. Iran’s strong political and economic institutions called “bonyadha” (foundations) also have an impact on foreign policy decision-making. Consequently, the Iranian president has limited power in determining Iran’s foreign policy.

The new president of Iran, Raisi, is unlikely to display strong political leadership in his first years in power. Beside institutional and legal restraints, there will be two determinants contributing to Raisi’s limited political power: First, Raisi has spent most of his career in the judiciary, thus, lacks political and administrative experience apart from being the head of the famous religious charity organization Bonyad-e Astan Quds Razavi (Astan Quds Razavi Foundation) between 2016 and 2019.

Bonyads are highly powerful institutions in Iran and are constitutionally exempt from parliamentary or governmental examination – they are only accountable to the supreme leader. Second, Raisi owes almost all his career to Supreme Leader of Iran Ali Khamenei. This means, he cannot breach the line drawn by Khamenei.

Read: Debates Heat Up As Iranians Elect Their New President

President Raisi’s new cabinet reflects his hardline approach. On August 11, he presented his cabinet to the Iranian parliament. The parliament is tasked with inspecting and deciding about the competence of the proposed names for ministerial duties. In principle, without the vote of confidence of the parliament, the proposed names cannot start their duties. Should their candidacy be rejected by the parliament, the Iranian president will have to offer alternative names.

Hossein Amir-Abdollahian, Iran’s new foreign minister, is close to the IRGC. He served as Javad Zarif’s deputy between 2013 and 2016. Zarif replaced him in 2016 drawing the IRGC’s criticism. Abdollahian’s statements show that his foreign policy direction will be towards the East rather than the West.

According to Abdollahian, “As the Leader of the Islamic Revolution reiterated, in our foreign policy, we should prefer the East to the West and neighboring countries to distant countries to safeguard the national interests of our country.” Abdollahian is fluent in Arabic, and knows the military network of the so-called axis of resistance very well. In his term, Iran’s regional activities will be more visible in Syria, Iraq, Yemen, and Lebanon.

Defense Minister Mohammad Reza Ashtiani is a brigadier general of the IRGC.

Defense Minister Mohammad Reza Ashtiani is a brigadier general of the IRGC. Raeisi proposed the former IRGC Quds Force commander Ahmed Vahidi for the position of interior minister. Ezzatollah Zarghami, the new Iranian minister of tourism and cultural heritage, was the head of the Islamic Republic of Iran Broadcasting (IRIB) service and a former member of the IRGC. Raisi chose Hojatoleslam Seyed Esmail Khatib as the intelligence minister. Khatib also worked for the IRGC’s intelligence unit.

Iranian President Ebrahim Raisi (R) speaks during an interview on broadcast of the state television in Tehran, Iran on September 05, 2021. Photo by Iranian Presidency/Handout via Anadolu Agency.

An interesting point about the new Iranian cabinet is that it contains some figures, who worked under Ahmadinejad’s presidency. Interior Minister Ahmed Vahidi served as defense minister under Ahmadinejad; Javad Owji, who has been nominated as the new minister of oil, was Ahmedinejad’s oil minister; and Rostam Ghasemi, who was also Ahmadinejad’s oil minister, has been appointed as the roads and transportation minister. Considering the tension between Ahmadinejad and Khamenei, Raisi’s ministerial choices show that the above names are pursuing their agenda rather than participating in Ahmadinejad’s current political stream.

Many of the names Raisi appointed and he himself are on the U.S. or EU sanctions list. This situation severely limits the diplomatic capacity of the new Iranian government. Some are curious as to how Western countries will contact and negotiate with the Iranian president and his ministers given that some of them are on their sanctions lists.

Both during the election campaign and after his election, President Raisi declared that he is not against nuclear negotiations. However, he also said that negotiations carried out in the previous period did not serve the interests of the Iranian people. For this reason, one can say that although the Iranian president is not against nuclear negotiations in theory, in practice, he will approach the issue in a tone and style that the P5+1 countries do not desire.

Both during the election campaign and after his election, President Raisi declared that he is not against nuclear negotiations.

Therefore, nuclear deal negotiations are likely to come to a deadlock. The latest round of negotiations were held two weeks before the Iranian presidential election. It was necessary to clarify how the newly elected president and his team would approach the issue of nuclear negotiations. However, although Raisi has been elected to office, the negotiations have not started yet. Hardline MP Mojtaba Zonnour said that Iran would not continue negotiations because the “Vienna format is a worse repetition of the JCPOA [Joint Comprehensive Plan of Action] and is jumping out of the frying pan into the fire.” Even though Raisi’s new cabinet and foreign policy team started their work, the future of the nuclear deal is not clear yet.

Raisi repeatedly emphasized prioritizing friendly relations with Iran’s neighbors in his foreign policy agenda. After his election, he clearly stated that Iran wants to normalize its relations with Saudi Arabia and the UAE. During Trump’s presidency, Tehran’s relations with these two countries deteriorated. With Biden coming to power, Gulf leaders calculated that they would not enjoy U.S. support against Iran as they did before.

The change in the U.S. administration is the main reason behind the two Arab Gulf states’ recent positive attitudes towards Iran. The main objectives on the Iranian side are maintaining the Gulf’s security and preventing conflicts with Gulf countries. Considering Iran has suffered from the U.S. sanctions seriously for almost ten years, avoiding costly conflicts with regional powers will benefit it.

Following his inauguration as Iran’s new president, Raisi has faced serious challenges from Afghanistan. As many experts and officers indicated, after the U.S. withdrawal from the war-torn country, the Taliban took over government. Land warfare expert at the International Institute for Strategic Studies Ben Barry claimed, “If the U.S. ceases to use its airpower to directly support Afghan forces, the Taliban will gain a considerable military advantage.” Sadanand Dhume from the American Enterprise Institute, said, “The Taliban don’t care about human rights any more than they did in 2001 and likely will take power.”

With the Taliban takeover, regional balances have drastically changed. To orient itself with newly emerging dynamics in Afghanistan, Iran changed its rhetoric and attitudes towards the Taliban. The situation in Afghanistan poses many challenges to the Tehran administration. For this reason, Iran has been negotiating with the Taliban for the past two years. First, to maintain border security, Iran took preventative measures and increased its military presence at the border and closed some border gates with Afghanistan.

Thanks to the agreements between Iran and the Taliban, this time, the notorious military group did not systematically persecute the Shiite minority.

What is more, the Taliban are famous for atrocities against Shiites in Afghanistan. Nevertheless, thanks to the agreements between Iran and the Taliban, this time, the notorious military group did not systematically persecute the Shiite minority. Although there are reports about Taliban attacks towards Hazara Shiites, there is no credible evidence that shows it is an official Taliban anti-Shia policy.

On the contrary, according to some media outlets, Taliban members joined the Ashura ceremonies and gave assurances that the Shia minority will be protected. Furthermore, in terms of trade and preventing drug and human trafficking, Iran needs to negotiate with the Taliban.

The Raisi era began in Iran with a vibrant foreign policy agenda. The stalemate in nuclear talks, normalization of ties with the Gulf states, and the Afghanistan crisis will take over most of Raisi’s foreign policy agenda. However, there may be unexpected turns or advancements in the coming days. Raisi’s response to these developments will be shaped by the dynamics stated above.