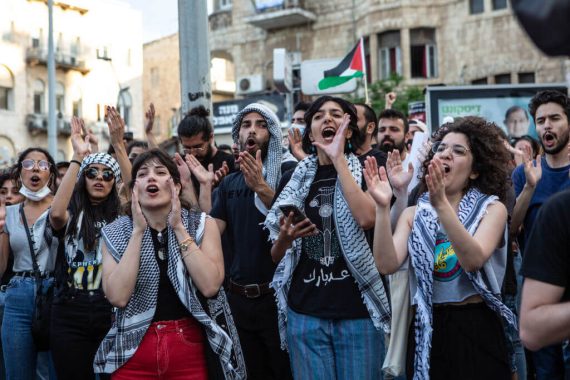 Palestinian citizens of Israel demonstrate in Haifa, Israel on 18 May, 2021, to mark a nationwide general strike called by the country's Arab leadership and to express solidarity for Palestinians in the Gaza Strip where, according to the Gaza Health Ministry, at least 212 people, including 61 children, have been killed by Israeli military strikes. Photo by Mati Milstein/NurPhoto via Getty Images.

Since Israel’s establishment in 1948, the Zionist project moved to effectuate and legitimize the gains of its ethnic cleansing campaign through various means, one of which is education. Education is a human right. On this fourth annual International Day of Education, under the theme of “Changing Course, Transforming Education,” it’s important to emphasize the nature of Israel’s education curriculum vis~a~vis its Arab-Palestinian citizens, which serves to uplift the nationality of one group (Jews), and dimish or omit the nationality of another (Palestinians). The indigenous Palestinian community was the majority in Palestine, and now live as a “foreign” minority in the newly founded state, with second-class citizenship.

Israel is required to recognize the right and freedom of its Palestinian minority to practice their culture, religion and language, and to adopt positive measures to avoid discriminating against them. Moreover, indigenous minorities have the right to have their history expressed in state institutions, including the education system. In Israel however, Palestinians are limited in their political and cultural expressions, especially through Israel’s education system. A prime example of this is the Nakba Law, which prevents publicly funded institutions, including schools, from commemorating the Nakba (i.e. catastrophe).

The Nakba represents the ongoing forcible displacement, ethnic cleansing, land theft, and systematic oppression of the Palestinian people. It rests in the collective memory of the Palestinian people, yet it’s suppressed, and hidden in the Israeli history curriculum. In fact, the 1948 ethnic cleansing campaign that caused the dispossession of 750,000 Palestinians is taught from an Israeli perspective as a “just war” while purveying the myth of “the few against the many.”

When the Nakba is mentioned in textbooks, it’s framed as part of the unfolding events of the Israeli war of independence, and Jews and Palestinians as equal sufferers, in effect positing parity between them. Moreover, the resulting refugee crisis is blamed on Arab states or the Palestinians themselves. The purpose of this pedagogical approach is to absolve the crimes of the state’s Zionist settler-colonial project, or at least provide justification for it.

Israeli textbooks reinforce Jewish-israeli territorial identity, wherein Palestinians are not regarded as ancestral inhabitants of the land, and therefore have no claim to it.

Israeli textbooks reinforce Jewish-israeli territorial identity, wherein Palestinians are not regarded as ancestral inhabitants of the land, and therefore have no claim to it. While Palestinians have been appointed to lead the Department of Arab Education since 1987, they lack decision-making authority, which remains exclusively under the direct control of the Ministry of Education. This contrasts sharply with the state’s Jewish religious school system, which is physically and administratively separate from the state’s secular Jewish school system, and maintains complete autonomy over its educational policy, aims and goals.

Israel enacted the State Education Law in 1953, the main object of which is to “educate” on the “loyalty to the State and the Jewish people.” The law as amended in 2002 references the Palestinian minority, referred to as Arabs in Zionist discourse, by “acknowledging” their language, history, and heritage. A mere acknowledgement implies mere mention, as opposed to education.

Despite this amendment, which doesn’t require positive action, Israel’s curriculum is still entirely controlled by the Ministry of Education, and therefore history education will remain consonant with the Zionist paradigm, in that the general scholastic and social objectives will continue to stress on the values, history and culture that serve Zionist interests.

The Palestinian-Arab school system contains a separate curriculum. Israel’s first curriculum was published in 1954, —during the height of military rule, which lasted from 1948-1966 — presenting a Jewish ethno-centric narrative for national liberation, by focusing on the “glorious past of Jewish people,” “Jewish culture,” and the founding fathers of Zionism. These early history textbooks for Palestinians depended on the perspective of the Jewish “people of Israel” based on the Bible, and taught in elementary schools and high schools.

While Arabic is the medium of instruction in Palestinian schools, teachers are obliged to base their instruction upon Ministry of Education guidelines. Even though the updated curriculum added elements of Arab-Palestinian values, the overarching goal of “loyalty for the State of Israel” remained intact. This goal can be summed up by a statement from the Minister of Education in 2001, Limor Livnat, when she expressed that she would not like there to be “a single child in Israel who doesn’t learn the basics of Jewish and Zionist knowledge and values.”

Palestinian students in Israel are deprived of the Palestinian literary classics taught throughout the Arab world. In addition to not learning about the Nakba or Palestinian history, they also spend many more class hours on the study of Hebrew, Jewish history, and Jewish culture than they do on Arabic literature and history. One example is that of foremost Palestinian poet laureate, Mahmoud Darwish, whose work Israel tried to ban in both Jewish and Palestinians schools. Former Defense Minister Avigdor Lieberman described Darwish’s texts as “fuel for terror attacks.”

A study found that over the years, generations of Israeli jews were taught from Hebrew textbooks that portrayed Palestinian-Arabs in a negative and deligitimizing way. Furthermore, on a general level, Palestinian society was presented as “primitive, backward and passive.” Israeli Jews were thus subjected to this form of negative and dehumanizing stereotyping, which ultimately conditioned how they perceive Palestinians.

What makes this trend more troublesome is that Palestinian history teachers can do little to correct it. They’re limited by the state curriculum and textbooks and banned from using other texts. The inevitable result of this educational regime is that Palestinian students are forced to memorize history as it is presented in these textbooks, because their final high school graduation exams depends on it.

Jewish exclusivity to Palestine was not only taught since the founding of the State of Israel in 1948; in fact, a study shows that history textbooks in the pre-state era (1900-1948) stressed the exclusive rights of the Jewish people to ownership of Palestine. The indigenous Palestinian-Arabs were portrayed as “backward, primitive,” and thus left the land “neglected” while awaiting “Jewish redemption.”

Additionally, the earliest geography textbooks, produced by Zionist authors in Europe who embraced the Zionist slogan of “a land without a people for a people without a land,” omitted the presence of the indigenous population. This orientalist framework represented the indigenous Palestinians as a “negative homogenous mob that threatens, assaults, destroys, eradicates, burns and shoots . . . who strive to annihilate the most precious symbols of Zionism.”

Israel’s education system is designed to maintain racial domination of one racial group over another, while systematically oppressing them. There’s a word for such a system: Apartheid.

Even the updated history textbook of 2016 reinforces the omission, dehumanization, and denationalization of the indigenous Palestinian minority that characterizes Israel’s prior history curricula. They’re referred to in the negative as “non-jewish groups,” and viewed as an amalgamation of religious, cultural and linguistic groups, thereby reinforcing the notion that Palestinians are not a national group, let alone in a struggle for national liberation. Palestinian citizens are thus alienated from their ancestral connection to Palestine, and the Zionist-Israeli ideology, narrative, and history is amplified to reinforce colonial domination.

As we reflect on the right to education, we must first understand how education is sometimes employed to undermine the existence of an entire people. Palestinian citizens of Israel learn their diluted history from within that prism. Israel’s education system is designed to maintain racial domination of one racial group over another, while systematically oppressing them. There’s a word for such a system: Apartheid. This week is that of the International Day of Education, and we recognize Israel’s apartheid education system and rally for all educators and educational institutions to incorporate this fact and knowledge in how we educate about the world.

Tarek Khaill is the Education Coordinator for the American Muslims for Palestine (AMP). He is an attorney, lecturer, and activist. He worked with the Illinois Coalition Against Torture (ICAT), an organization which seeks to end domestic police torture and raise awareness of global torture. He was also a volunteer Attorney with the Council on American Islamic Relations (CAIR-Chicago), the nation’s largest Muslim civil rights and advocacy group. Tarek lectures on topics such as modern Palestinian history, Middle East politics, and Palestinian rights under international law.