The UAE’s latest diplomatic moves towards Turkey reveal that there is a consensus to cooperate economically despite political differences. 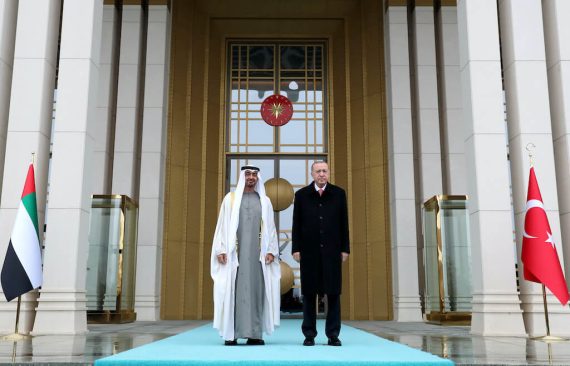 Mohammed bin Zayed, the crown prince of the United Arab Emirates (UAE), visited Turkey and was received by President Recep Tayyip Erdoğan on November 24. Diplomatic sources state that this meeting could have been held long before, but was delayed. The visit by the crown prince, the latest being ten years ago, tells a lot. Have foreign policy priorities changed in the UAE? Why have the two leaders waited 10 years to meet again?

Heralding a new era in bilateral relations indicates that geo-economic interests outweigh geopolitical ones at the moment. Both sides are being pragmatic; however, the competition in the region will not suddenly come to an end. At the same time, the visit signaled that the rivalry is manageable through taking bilateral steps based first on economic cooperation.

The latest diplomatic move by the UAE shows that Abu Dhabi has acknowledged Turkey’s power and potential, and is coming to terms with the Turkish foreign policy perspective in MENA. Since the early days of this year, there is a pattern in the Middle East pushing regional powers to seek mutual engagements, and even though they continue to diverge on different issues, they seem to have found mutual grounds of understanding.

Along this line, the UAE’s view of Turkey has shifted too. For the UAE, challenging or intensifying the competition against Turkey is not a priority anymore. Moreover, the UAE has given up being part of the polarization in regional politics. Since the start of 2021, the UAE has been de-escalating tensions with regional actors including Syria and Iran.

There are many reasons why the UAE is normalizing its relations with Turkey. The election of Joe Biden and his approach towards the Middle East have contributed to accelerating this rapprochement. Biden has been criticizing the UAE’s adventurous foreign policy and he is unlikely to support Abu Dhabi’s destabilizing position in the region. Donald Trump was chiefly responsible for packing fights, conflicts, and tensions into the Middle East.

Another reason behind the UAE’s changing view of Turkey is that Abu Dhabi has long feared Turkish foreign policy’s translation into hard power.

On the other hand, the Biden era has brought uncertainty to those whose foreign policies rely on U.S. support –as for example, the Gulf monarchies. Therefore, without U.S. backing, sustaining the rivalry with Turkey would not be easy, and the UAE seems to have grasped this quickly.

Another reason behind the UAE’s changing view of Turkey is that Abu Dhabi has long feared Turkish foreign policy’s translation into hard power. The UAE policymakers thought that by putting pressure on Turkey, Ankara could give up seeking its national interests in the region. Since 2016, however, every foreign policy move by Turkey has hit the target.

Turkey has successfully conducted several military operations in Syria against terrorist groups such as DAESH and the PKK/PYD despite the fact that the latter has been supported by the United States, Turkey’s strategic ally. Turkey has also been cautious in playing a balancing game in Syria between Russia and the United States.

Turkey has secured a seat at the diplomatic table on Syria alongside Russia and Iran, the main actors in the Syrian civil war, by launching several successful military operations in northern Syria and providing military equipment to Azerbaijan, thus altering the balance of regional power. Russians have understood this well, too.

Turkey’s diplomatic and military moves to change the balance of power in Libya and Azerbaijan, and its increasing role in Afghanistan have led the Emirates to step back.

The same applies to the UAE’s approach to Turkey’s foreign policy objective. Turkey’s diplomatic and military moves to change the balance of power in Libya and Azerbaijan, and its increasing role in Afghanistan have led the Emirates to step back. Turkey’s military capacity and its successful operations are increasingly regarded by the UAE as strong deterrents.

Mohammed Dahlan, who is in Turkey most-wanted list, had his movement reportedly restricted by the UAE and that he may be asked to leave to another country. The same scenario is uttered for Sedat Peker, an eccentric Turkish mafia boss. Another salient piece of evidence would be the lessening of anti-Turkey propaganda in UAE-backed media. In fact, the UAE-backed media covered the visit positively.

Turkey and the UAE agreed on economic cooperation, which was the most important item on Mohammed bin Zayed’s agenda. Given COVID-19’s shattering spillover effects on economies, the two countries agreed on boosting the trade volume to at least $15 billion. The UAE’s economic pragmatism prioritizes increasing its investments abroad to diversify the non-oil trade volume. We should also keep in mind that the Emirati officials want to turn the country into a trade hub in competition with Saudi Arabia, the UAE’s strong and traditional ally.

Turkey and the UAE agreed on economic cooperation, which was the most important item on Mohammed bin Zayed’s agenda.

Therefore, the UAE wants to open a trade route with Turkey, involving a corridor passing through Iran, and to enhance its chance to become the region’s economic leader. This new trade corridor has encouraged regional actors to intensify cooperation rather than competition.

In this sense, the UAE decided to invest more in Turkey and normalize its relations with Ankara. On the first of November, Iran announced that the first shipment along this route, connecting the UAE and Turkey, was transported. With this new corridor, shipments which took 20 days by sea on the Sharjah-Mersin route via the Suez Canal will now take six to eight days, passing through Iran.

The new transportation route saves time and reduces costs. This is a good example of how the UAE has started prioritizing economic gains over political differences in its relations with Turkey. The UAE is looking for ways to increase its investments in Turkey, and there are several fields that Abu Dhabi is interested in, such as business, energy, transportation, and delivery services. Direct foreign investments are a mutual target for both countries. The UAE was searching for new countries to invest in order to diversify its economic activities, while Turkey regards direct foreign investment as a remedy to heal economic stagnation.

In September, Turkey’s e-commerce giant Trendyol raised its value to $16.5 billion by investing $1.5 billion  in Trendyol from several high-profile investors, including Abu Dhabi’s state fund ADQ. The UAE is expected to invest $500 million in the Turkish MNG cargo company.

The UAE’s latest diplomatic moves towards Turkey reveal that there is a consensus to cooperate economically despite political differences. The UAE aims to leverage Turkey’s power to balance its regional competitors such as Saudi Arabia and Qatar with which Abu Dhabi has political disagreements. On the other hand, despite several positive and constructive signs of improvement of UAE-Turkey ties, Abu Dhabi has not entirely given up its anti-Turkey position. Economic cooperation may help to ease the tension, but the potential for political crises is still there.

The rivalry between the UAE and Turkey continues in many subregional fields such as Eurasia, Africa, the Eastern Mediterranean, and Libya. The diplomatic rapprochement between Ankara and Abu Dhabi is a policy recalibration and can be seen as an effort to manage the rivalry. Even though it is still hard to predict how a possible normalization would proceed, it can be expected that economic relations will further strengthen, and geopolitical rivalry will lessen but continue under a new framework.