The Middle East has proven this several times: yesterday’s enemy could be tomorrow’s ally. 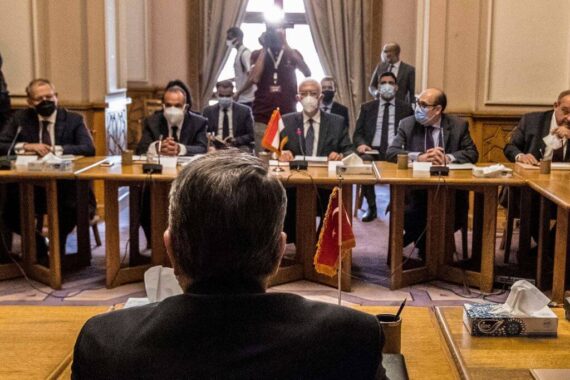 In March 2010, at the last Arab summit held in Libya, then secretary-general of the Arab League Amr Moussa proposed to expand the Arab League to include Turkey. Moussa called on Turkey to be part of the Arab regional system in a strategic dialogue as a friendly neighboring major power with strong historical, cultural, and economic ties to the region. However, Moussa’s “Arab neighboring policy” was postponed to the next summit and was never realized after the region was shocked by the wave of Arab uprisings that started a few months later.

In the pre-Arab uprisings era, Turkey was enjoying the golden days in its relations with regional countries, in particular the Gulf Cooperation Council (GCC). On the Turkish side, economic considerations and the enhancement of its position in the Middle East were the driving force, while on the GCC states, the adverse impact of the U.S. invasion of Iraq, which strengthened the Shiite position in the country, and the rising Iranian influence in the region had an important impact on their consideration of Turkey as a potential partner.

Despite their domestic differences, Turkey and the GCC states agreed on the fact that without mutual cooperation, it would be quite difficult for the two sides to maintain the balance of power in the region in such a way as to favor their own interests. Thus, domestic factors did not play a large role in shaping the foreign policy decisions of Turkey and the GCC states when the nature of the regional developments, such as in Iraq, Lebanon, and Palestine, were more related to the balance of power in the Middle East. For the sake of their regional interests, Turkey and the GCC states did not allow their domestic differences to come to the surface and adversely affect their cooperation.

Read: The Straw That Might Break the Camel’s Back in Saudi-UAE Relations

However, the harmony that Turkey and the GCC enjoyed ended fairly soon with the Arab uprisings, especially after Egypt’s military takeover in 2013. The regional security perceptions of two opposing alliances – one that supported the popular movements, spearheaded by Turkey and Qatar, and another that opposed them championed by the United Arab Emirates (UAE), Saudi Arabia, and Egypt – diverged significantly over regional crises, creating an “ideological proxy war” which preponderated over their mutual concerns.

In recent months, this picture has begun to change as several signs of a rapprochement between these actors have emerged. The era of military-based hard power politics that had led to subsequent crises between these actors seems to have closed and a fresh start is on the horizon.

Breaking the ice, but gradually

Following the recent visit of UAE National Security Adviser Sheikh Tahnoun bin Zayed al-Nayhan to Ankara, Turkish President Recep Tayyip Erdoğan held a rare phone call with UAE Crown Prince Mohammed bin Zayed (MBZ). That was followed by a call between their foreign ministers. It was reported that Kurdistan Regional Government (KRG) President Nechirvan Barzani, a good friend of both Erdoğan and MBZ, helped facilitate the rapprochement between Turkey and the UAE – two countries that confronted on almost all regional issues concerning Libya, Egypt, the Horn of Africa, Yemen, and the Eastern Mediterranean throughout the past decade.

After Ankara, Tahnoun’s next destination was Doha in the first such visit in four years following this year’s Al-Ula deal that ended the bitter dispute in the region. After being received by Erdoğan, Tahnoun, brother of MBZ, met with Qatari Emir Sheikh Tamim bin Hamad al-Thani. A few days after this visit, al-Thani met with Egypt’s President Abdel Fattah el-Sisi, the first meeting between two leaders since Al-Ula.

Despite a progress in Turkish-Egyptian relations, it is still early to expect a similar meeting between Erdoğan and el-Sisi. However, Qatar, a country that aims to become the center of diplomacy, might play an important role if such a meeting ever happens in the future.

These visits came ahead of the second round of diplomatic talks between Turkey and Egypt to be held in Ankara on September 7-8, while the first round was in Egypt on May 5-6. Ankara and Cairo engaged in efforts to bring relations back on track, while Qatar, a close ally to Turkey, also joined the rapprochement process with Egypt. Doha and Cairo have already exchanged the appointment of ambassadors in June and August, respectively.

It is significant to note that all these recent rapprochement efforts between the Turkey-Qatar and the UAE-Egypt-Saudi Arabia blocs did not come out of the blue. It is part of the new de-escalation era triggered by several factors – international, regional, and domestic.

Due to external factors, both international and regional, and domestic factors related to economy and security, countries within these opposing blocs have equally started to recalibrate their positions and reset their relations, which had previously been predicated on confrontation. The main theme of this new era is realpolitik as actors seem determined to put ideology aside and focus on the economy for solid gains to end a period of intense regional rivalry.

International: The new U.S. administration under Joe Biden is determined to prioritize Asia, to deal with its own domestic issues, and to push for diplomacy in the Middle East, unlike the preceding Trump administration. This change in the global context came at a time when the U.S. is re-evaluating its military footprint in the region, which has been a triggering factor in pushing Turkey, Qatar, Egypt, the UAE, and Saudi Arabia towards a de-escalation era.

Biden’s tenure not only led these countries to question the U.S. security commitment but also raised the importance of relying on regional cooperation just like in the pre-2011 era. Ultimately, the recent reconciliation climate aligns with the Biden administration’s policies in the region.

Regional: The signing of the Al-Ula declaration that officially ended the Gulf dispute created further incentives for Ankara to break the ice with Egypt, the UAE, and Saudi Arabia. As such, Turkey’s attempts to normalize relations with Egypt paved the way to the rapprochement with the other Gulf countries as well. Turkey and Qatar started a dialogue with Egypt and Saudi Arabia, while in order not to remain on the sidelines of this regional era of rapprochement the UAE also rolled up its sleeves.

Domestic: Domestic considerations play a significant role in shaping a country’s foreign policy. In the domestic context, Turkey’s precarious economic situation and the UAE’s need to make investments in accordance with its “Vision 2030” have been a driving force in the Turkey-UAE rapprochement. Erdoğan underlined that trade was the main focus of talks with Tahnoun, saying that “serious Emirati investments” lay on the horizon. Cultivating economic ties not only benefits the two sides, but could also prove beneficial to both countries’ political and security interests.

To conclude, the Middle East has proven this several times: yesterday’s enemy could be tomorrow’s ally. Changing geopolitics and realities in the region have pushed countries to put aside ideological differences for the sake of national interests and stability in the region.

Now that the Turkey-Qatar and the UAE-Egypt-Saudi Arabia blocs seem to perceive this rapprochement as an opportunity to maintain their regional influence, it is unlikely that they will allow minor internal political calculations to hamper this rapprochement process.

Time will show whether regional countries will be able to build confidence similar to the pre-2011 era, when interest-driven pragmatism outweighed ideologically-driven foreign policy.