What had to happen, happened. Algeria and Morocco have broken off their diplomatic relations. What will happen now? 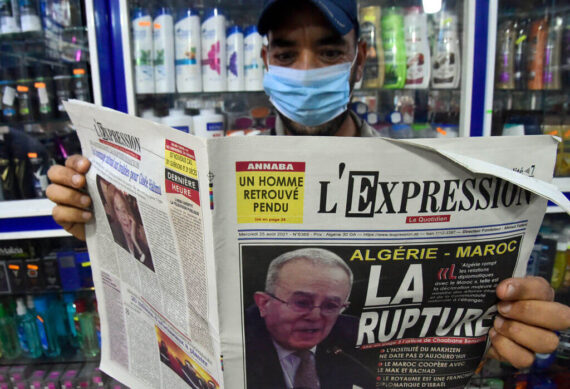 An Algeria man holds today's newspaper in the capital Algiers, on August 25, 2021. - Algeria's Foreign Minister Ramtane Lamamra said the previous day that his country has severed diplomatic relations with Morocco due to "hostile actions", following months of resurgent tensions between the North African rivals. Photo by RYAD KRAMDI/AFP via Getty Images.

What had to happen, happened. Algeria and Morocco have broken off their diplomatic relations. Algerian Foreign Minister Ramtane Lamamra made the announcement on Tuesday, August 24, 2021, during a press briefing. Before announcing this fatal outcome, Lamamra made a long presentation in which he listed all his country’s grievances towards Morocco since Algeria’s independence in 1962.

Lamamra began by recalling the Sands War, which pitted the two Maghreb armies against each other between the end of 1963 and the beginning of 1964. He went on to describe all the misunderstandings between the two states over the past 60 years, recalling, of course, the eternal dispute over Western Sahara between the Sahrawi independence fighters of the Polisario Front, supported by Algiers, and the Kingdom of Morocco since 1975. He then moved on to recent history, touching on the recent tensions, which have been shaking the two countries and are not minor.

Here are the reasons that pushed Algiers to break its relations with Rabat. Algeria considers that the normalization of diplomatic relations between Morocco and Israel in December 2020 means the installation of a “Zionist vanguard” in the Maghreb. And this, it has claimed since December, constitutes a threat to its security. The recent official visit to Morocco of the minister of foreign affairs and future prime minister of Israel, Yair Lapid, has only added fuel to fire.

Although it is still not known if he did so with the approval of the Moroccan authorities, from Raba, Lapid criticized the “rapprochement [of Algeria] with Iran” thus expressing the opposition of the Rabat-Tel Aviv axis to the supposed Algiers-Tehran axis. By doing so, he exported to the Maghreb the geostrategic rivalry between Israel and Iran. This move was viewed as a mistake in the eyes of many Moroccans who, despite a bitter Saudi campaign that led to the breakdown of diplomatic relations between Morocco and Iran, do not consider Iran an enemy.

For several years, Rabat has been trying to give credence to the idea that Tehran, through the Lebanese movement Hezbollah, supports the Polisario Front militarily, with the acquiescence of Algeria.

For several years, Rabat has been trying to give credence to the idea that Tehran, through the Lebanese movement Hezbollah, supports the Polisario Front militarily, with the acquiescence of Algeria. But for the moment, despite a few rare opinion articles in the Moroccan and foreign media linked to the Moroccan regime, no serious investigation has been able to confirm this scenario. Even the Americans, although vigilant towards Iran and Hezbollah, have not detected anything.

The other Moroccan blunder that set off the fire was the quasi-recognition of MAK, the Movement for self-determination of Kabylie, supported by Rabat and considered a “terrorist organization” by the Algerian government.

During a virtual meeting of the countries of the Non-Aligned Movement, which took place in New York on July 13 and 14, the permanent representative of the Moroccan diplomatic mission to the UN, Ambassador Omar Hilale, distributed a note to the UN member states in which he described the “valiant” Kabylie people who have been under the longest foreign occupation and who “deserve, more than any other, to fully enjoy their right to self-determination.” Kabylie is an Algerian region, and unlike Western Sahara, it is not on the list of non-self-governing territories that have the right to self-determination.

The outrage and threatening response of the Algerian Minister of Foreign Affairs Lamamra speaks of the level of tension between the two countries. He said that Morocco is using part of Algerian territory to say that it deserves autonomy, that it is occupied, and that this is something very serious and can lead to more serious things like an armed conflict.

“Armed conflict” was said and in public. Then things got very serious: Algerian President Abdelmadjid Tebboune convened a meeting of the High Council of Security (HCS) which ended with solemn and very explicit announcements.

The Algerian state announced its decision to “review” its relations with Rabat and to intensify security control on the western borders due to “the incessant hostile acts” by Morocco.

A few days later, Algeria declared that the forest fires that ravaged the north of the country were caused by MAK militants. To further increase its pressure on Morocco, Algiers accused Morocco of training MAK activists in military camps.

The rupture of diplomatic relations was a matter of days. To show that there was no return back and to signify that the bridges between the two countries had been definitively cut, on August 26, Algiers announced that it would no longer use the Maghreb-Europe Gas Pipeline that connects the Algerian oil fields with Europe via Morocco. Mohamed Arkab, the Algerian energy minister, explained to the Spaniards that from now on, the Algerian gas would only go through Medgaz, another pipeline that links Algeria directly to Spain, without passing through Morocco.

Read: The Amazighs in North Africa: Politics, Society, and Culture

This Algerian decision constitutes an economic loss for Morocco, which used to pump 900 million cubic meters of natural gas every year, let alone the financial losses that Rabat will suffer as it will no longer collect money from Spain for using its territory.

What will happen now? It is unlikely that the escalation between Algeria and Morocco will end with the severing of diplomatic ties.

What will happen now? It is unlikely that the escalation between Algeria and Morocco will end with the severing of diplomatic ties. The fear that Moroccans and Algerians residing in both countries will be expelled from their homes as was the case in 1976 at the height of Algiers’s recognition of the Polisario Front is palpable, yet unlikely, unless the situation escalates.

Today, there are only skirmishes between the Royal Armed Forces (FAR) and the Saharawi independence fighters who broke the ceasefire with Morocco last year after the events of the border post of Guerguerat that separates the disputed territory of Western Sahara from Mauritania.

But we are still in a pre-war situation which has the potential to continue. It can also tip over into an all-out conflict if Algeria allows and supports the Polisario Front in going beyond today’s military commitments.

Morocco and Algeria have engaged in a dangerous arms race in recent decades. In 2015, Algeria’s military budget was $11 billion, while Morocco’s was only $3 billion. Morocco caught up with Algeria after launching a $22 billion five-year rearmament plan in 2017 and then reintroducing mandatory military service in 2018. The two countries have arguably reached a dangerous military equilibrium that experts say will often end in conflagration.

A war, even limited and short, would considerably weaken the two economies, which are already in bad shape, provoke sentiments, and make the much-needed reconciliation far away. Above all, it would destabilize the entire Maghreb region. This does not suit the European Union, which needs Algeria and Morocco to fight illegal immigration.

Morocco and Algeria share a common history, religions, and vernacular languages. Even if the two people might not identify with the diplomatic squabbles and bellicose desires of their rulers, a conflict with death and destruction would break this fraternal bond, which today, despite assurances from both sides, hangs by a thread.