The brotherhood rhetoric between Morocco and Algeria will survive along with mutually hostile attitudes. The room for optimism is there, but in the form of a benign hypothesis. 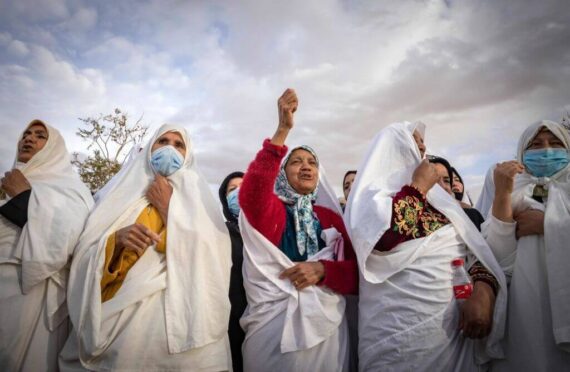 Moroccan farmers protest in the border city of Figuig on March 18, 2021, after Algerian authorities expelled the date growers from a border area they were traditionally authorised to farm in the Algerian territory. - The border between regional rivals Algeria and Morocco has been closed since 1994, but Algiers had allowed some 30 Moroccan farming households to use an area of farmland known to Moroccans as Arjal and to Algerians as the Laaroda oasis. Photo by FADEL SENNA/AFP via Getty Images.

As a general rule, when two neighboring countries share similar cultures and have similar political and diplomatic weight, they tend to compete. Healthy in some cases, this rivalry may be fierce in others. According to the established terminology, Morocco and Algeria are two “brotherly countries” in the Maghreb. Morocco and Algeria have the same origins, namely Berbers with an Arab mixture, and they are mostly Sunni Muslims.

Another element in their favor is their local dialects – or Berber idioms, so as not to upset the purists. Moroccans and Algerians speak a common vehicular language: Darija or Maghrebi Arabic.

This rosy picture, however, has not prevented Morocco and Algeria from becoming, over time, adversaries, and even enemies. On two occasions, in 1963 and 1976, they clashed militarily, causing hundreds of deaths. And since 1994, the land border between the two countries has been sealed off.

Without going into details about the form of government, Morocco is a monarchy with a liberal economy and Algeria is a republic with a centralized socialist economy. Several episodes of common history can explain this antagonism.

VIDEO: Protests in border town after Algeria expels Moroccan farmers from their land

Algeria, it seems, is not ready to forget the old squabbles, some dating back to the 19th century and others to the 20th century. In fact, if we want to locate the origin of this conflictual relationship, we have to go back to 1963. In that year, an armed conflict, the Sands War, put the Sherifian kingdom against the newly independent Algeria. A conflagration was provoked by a territorial dispute, which lasted only a few months and caused several hundred deaths.

This was only the beginning. In 1973, a new crisis broke out when Morocco confiscated foreign private property on its soil, including, of course, that of its Algerian “brothers.”

This was only the beginning. In 1973, a new crisis broke out when Morocco confiscated foreign private property on its soil, including, of course, that of its Algerian “brothers.” The Algerian response came in 1975 following the outbreak of war in Western Sahara between Morocco and the pro-independence fighters of the Polisario Front. The massive expulsion by former Algerian president Houari Boumédiène of thousands of families, some of whom had been in the country for ages, was seen by Morocco as a heavy-handed and cruel endeavor. In 1974, a short battle between the two armies, confined to the village of Amgala in Western Sahara, came close to turning into a full-scale war.

It should be stressed that if the military and diplomatic support given by Algeria to the Saharawi independence fighters is a major cause of this dangerous discord, Morocco has not remained idle either. King Hassan II secretly tried to ignite an insurgent hotbed in the Algerian Berber region of Kabylia, and in 2014, an anonymous hacker by the name of “Chris Coleman” disclosed confidential documents revealing the support of the General Directorate for Studies and Documentation (DGED, Morocco’s external intelligence agency) to the Movement for Self-Determination of Kabylia (MAK), a pro-independence Berber group fighting against the Algerian central government. At the same time, it is true that the Moroccan contribution to MAK is derisory compared to the substantial aid provided by Algeria to the Polisario Front.

Read: The Amazighs in North Africa: Politics, Society, and Culture

With the exception of the 1991 ceasefire between Morocco and the Polisario Front, since the battle of Amgala between the Algerian and Moroccan armies, the status quo between the two countries has not changed. Neither a military confrontation nor a full reconciliation has been realized. However, events concerning the two have recently accelerated.

The Guerguerat crisis of November 2020, following the Moroccan army’s dispersing of a group of Saharawi demonstrators who were blocking the border between Western Sahara and Mauritania, which amounted to a violation of the 1991 ceasefire, the Polisario Front’s return to arms, and Donald Trump’s recognition of Moroccan sovereignty over this disputed territory have toppled the status quo.

Read: The Scars of French War Crimes Won’t Be Forgotten

Algeria viewed this recognition as an affront, but also as a threat to its borders. For Algiers, the installation of an Israeli embassy in Rabat means that the Jewish state will be at its doorstep. This is explicit in the articles in the Algerian press where Morocco is accused of being a “Zionist entity.” And not only in the press: recently this term was used to describe Morocco in a rare communiqué of the Algerian National Popular Army (ANP).

Morocco gets its supplies from U.S. and European parties, and Algeria from the Russians.

If we were to remain only in the exchange of statements, the situation would be comical at best, but this verbal agitation goes hand in hand with muscular outbidding. Since the beginning of the 21st century, Morocco and Algeria have been re-arming. Morocco gets its supplies from U.S. and European parties, and Algeria from the Russians. Morocco can boast Western military know-how, but it cannot match the firepower of the Algerians. The quantity, quality, and modernity of the armament purchased by Algeria is impressive. According to the specialized site Global Firepower, in terms of armament, Morocco is placed far behind Algeria.

It is precisely this capacity that Algiers wanted to showcase in the middle of January by organizing military exercises in the region of Tindouf, in the south of the country. Why Tindouf? Because it hosts the Saharawi refugee camps of the Polisario Front and it borders both Western Sahara and Morocco. The border between the two countries is only a few dozen kilometers away. Without doubt, Algeria wanted to show its claws.

These moves may not be a prelude to an armed conflict, which would be suicidal for both countries, but the possibility is not improbable. The Moroccan diplomatic victory of the U.S. recognition of Morocco’s sovereignty over the Sahara has clearly shocked Algeria’s political and military establishment. Various calls from Algerian institutions, such as the parliament, to U.S. President Joe Biden to reverse his predecessor’s Western Sahara decision and the strengthening of the Algerian diplomacy in its endless war against its Moroccan neighbor do not bode well.

How do these conditions help build the Great Maghreb integration project in which the Moroccan and Algerian people place so much hope? Since 1989, the date of its creation, the Arab Maghreb Union between Morocco, Algeria, Tunisia, Mauritania, and Libya, with its headquarters in Rabat, has been at a standstill. Despite boasting a population of more than 100 million, this formidable confederation at the gates of the European Union looks like a ghost.

This integration project is not considered a priority by Rabat or Algiers, unlike other Maghreb states. A week ago, Rached Ghannouchi, the leader of the Ennahda Movement, Tunisia’s majority party, came up with an unusual proposal which took many people in the region by surprise. In a televised interview, Ghannouchi proposed that the Greater Maghreb should be established by three countries: Tunisia, Algeria, and Libya. He excluded Morocco and Mauritania deliberately.

Contrary to former Tunisian president Moncef Marzouki, who took up the cause of Rabat and its Western Sahara bid, in recent months Ghannouchi has not hidden his intention to strengthen relations with Tunisia’s large neighbor, Algeria. One can understand this initiative by the urgent need for Tunisia to revive its economy through the Greater Maghreb project without waiting for the resolution of the Sahara conflict. However, it is not certain that Rabat will view it this way. In Morocco, this initiative would rather be viewed as tipping Tunisia into the Algerian sphere of influence – another threatened status quo.

At the moment, everything is stationary. And the situation between Algeria and Morocco is unlikely to change in the short term. Morocco and Algeria are the Maghreb’s two main states, and without both joining in with the support of their respective mentors, it is hard to achieve integration.

Morocco sometimes enjoys blind support from the West, particularly from France and the United States, and more recently from Spain. Recently, U.S. support was exemplified by Trump’s recognition of Western Sahara as part of Morocco. The ties between the U.S. and Morocco are well established and go as far back as the 1770s. Algeria is still resolutely turned towards Russia, the heir of the USSR. And since relations between the West and Russia are not about to improve, Morocco and Algeria will continue to torment each other.

Until another historical moment in the future – perhaps an upheaval in the Maghreb or conversely a new generation of politicians coming to power in both countries with a sincere vision to end the conflict in the Western Sahara, which may pave the way for a permanent reconciliation – the current brotherhood rhetoric will survive along with the occasional mutually hostile attitudes. The room for optimism is there, but in the form of a benign hypothesis.