Russia isnot behaving as the second-rate player Washington envisioned, but as the assertive Eurasian power it has always aspired to become. 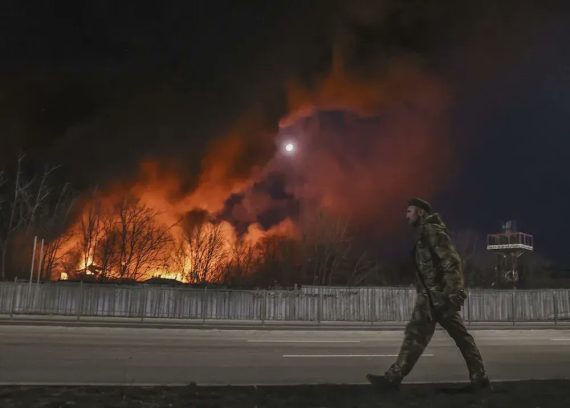 America’s leaders are fighting too many battles at once. They are taking on Russia, China, and DAESH as well as North Korea, Iran, and a host of militias with transnational reach. They are spreading inadequate military forces over vast distances with no control over multiple confrontations that can quickly escalate into conflagrations across every continent and ocean.

In all of the would-be superpowers, generals and diplomats think they can choose their own wars. Once they identify key adversaries, they lay out plans to contain them within well-defined boundaries—assuming they can shift resources between competing fronts to put out fires as they breakout in one region after another.

Over the last two decades, four American presidents became the most enthusiastic advocates of this approach. One after another, they spun a series of dubious and contradictory geopolitical projects—The Global War on Terror, democratizing the Greater Middle East, the pivot to East Asia, joining maritime zones to form an imaginary Indo-Pacific theater, and, through it all, the steady expansion of NATO into post-Soviet territories.

As each administration struggled to exit the quagmires of Iraq and Afghanistan, it was obvious that U.S. strategists would have to juggle at least three regional fronts simultaneously. China, Russia, and countless Islamic movements would mount constant challenges to Washington’s efforts to shore up its superpower status. Instead of dominating a unipolar world, America had to wrestle multiple power centers with impressive resources and unpredictable intentions.

Then, just as American strategists thought they were ready to cope with the growing complexity of global politics, the Ukrainian war upended all of their key assumptions. China no longer seemed to pose the greatest threat to international order. Russia was not behaving as the second-rate player Washington envisioned, but as the assertive Eurasian power it has always aspired to become.

In the Middle East, a new nuclear deal with Iran had to be postponed and Syrian volunteers were asked to fight in Ukrainian cities.  Once again, simmering Middle Eastern tensions were fueling chain reactions with a distant crisis that Beltway thinkers viewed as unrelated.

The most alarming aspect of the war was the rapid push toward escalation on all sides. Each day brought more threats and brinksmanship, increasing the likelihood of miscalculation and self-destructive action. A flood of sympathy for refugees and civilian victims seemed to be overwhelming the restraints that planners had counted on to avoid a conflagration. Popular emotions were pressuring governments to react to events instead of directing them.

Chinese leaders sense that this turmoil might offer them some important benefits if they can control themselves while everyone else seems on the edge of panic. As long as Russia and the United States batter one another, China can enjoy some breathing space from American efforts to surround it with a new maritime coalition. If the fighting in Ukraine reaches a stalemate, Beijing can play the peacemaker by brokering a truce or an eventual compromise.

In the meantime, China will try to lend Russia enough support to keep it afloat, but not so much as to tip the balance in Moscow’s favor. As usual, Beijing will play both sides of the sanctions game—respecting some trade bans in order to maintain access to Western markets, but constantly bending the rules and trying to stay a step ahead of American retaliation.

China’s goal is to rebrand itself as a guarantor of the international system in contrast to Washington’s warnings that it is a revisionist power determined to overthrow the status quo. Chinese leaders are convinced that the tide of history is shifting the balance of power in their favor. In this light, they see the war in Ukraine as another rung on their ladder toward replacing the United States as the benevolent hegemon most deserving of global respect and leadership.

Analyzing the current situation in Ukraine, a Chinese commentator expressed precisely this sentiment. Zheng Yongnian argued that events are moving in China’s direction and that, as long as China doesn’t sabotage itself with foolish behavior, it will continue to prosper. Zheng’s caveat about reckless action might have been intended as a mere aside, but his warning can also be seen as the most important part of the picture. The world order that China claims to value is a shambles—largely due to the flagrant law breaking of all the great powers, China included.

From Abu Ghraib to Mariupol

International law is generally respected in commerce and diplomacy, but it is routinely cast aside in matters of armed conflict, human rights, and immigration. The very countries that make the rules violate them with impunity. Abu Ghraib, Xinjiang, and Aleppo helped establish the pattern long before Kharkiv and Mariupol.

Defying the law of nations is part of a wider pattern of ignoring risk that has become a typical approach in many areas of policy making around the world. Beyond refusals to limit the use of military force, we see failures to manage economic meltdowns, environmental disasters, recurring pandemics, waves of human migration, and ethnic violence. Scholars in several fields have tried to explain the striking increase in such seemingly irrational behavior.

Many views combine psychological, economic, and structural approaches. The most frequently cited causes of dysfunction include distorted information, biases of individualistic cultures, disincentives to collective action, indifference to externalities, the inherent anarchy of sovereign nations, and coalitions of entrenched interest groups. These ideas have blended into a new orthodoxy of social skepticism that refutes once dominant assumptions about rational choice and efficient markets.

Unfortunately, skepticism may not sufficiently illuminate the gravity of the situation because it neglects the central issues of intention and responsibility. In much of the world, political leaders have failed so often that their citizens no longer believe they are acting in good faith to protect the public interest.

By fostering ever deeper inequalities, governments and international organizations seem to serve privileged elites at the expense of everyone else. This perception undermines the legitimacy of all ruling institutions whether they are national or global, political, or corporate.

The result is an upsurge in social movements with transnational reach demanding accountability for war criminals, tax evaders, polluters, and human traffickers. Several countries have adopted a form of universal jurisdiction permitting their courts to judge particularly heinous crimes no matter where they are committed even if the perpetrators are sitting officials.

When President Biden declares Vladimir Putin a “war criminal”, he is bending to public outrage against all leaders who flaunt international law. Biden’s denunciation requires action—not merely against America’s adversaries, but against perpetrators from his own country, both past and present.

After the Nuremburg and Tokyo trials, legal immunity for international crimes narrowed in theory only to resurface in recent years as impunity in practice. This is a collective lapse of conscience among ruling elites that world citizens are still struggling to reverse.