Reforming the US Defense Acquisition Discussed by American Experts

Title 10 of the US Code has become a bureaucratic body and despite reform initiatives, it still disables the defense acquisition systems with its messiness. 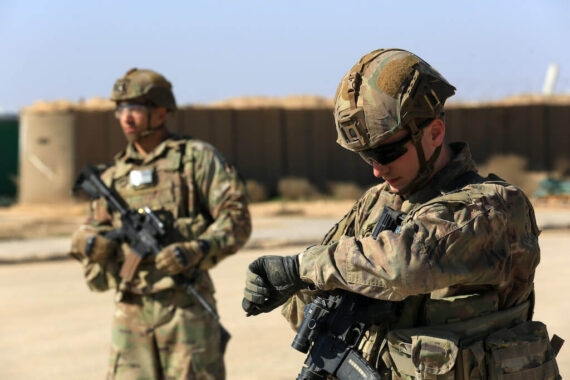 Soldiers from the US-led coalition forces are seen at the Al-Qaim Military Base in Iraq’s Anbar province, west of Baghdad, on March 19, 2020. Photo by Murtadha Al-Sudani, Anadolu Images

During an hour-long webinar, the U.S. government representatives Karen Thornton, professional staff member on the House of Armed Services Committee and Phil Rogers, a representative from the Department of Defense (DoD), joined in shortly as listeners during a webinar on the reorganization of the U.S. defense acquisition.

The webinar was held by the Centre for Strategic and International Studies, a U.S.-based think-tank on February 19, 2021, where experts such as Moshe Schwartz; President of Etherton and Associates, Inc., Andrew Hunter; Senior Fellow and Director, Samantha Clark; Special Counsel at Covington & Burling, spoke.

The U.S. National Defense Authorization Act (NDAA) specifies annual budget and expenditures of the U.S. Department of Defense, which is a governmental body providing national security with military forces. Experts have long expressed their frustration for Title 10 of the U.S. Code, and how it has gotten bigger over time with notes and provisions of legislation texts, and eventually this has slowed down the efficiency of defense system.

“We’re doing this in reaction to the inclusion of Title 18 of the Fiscal Year 2021 National Defense Authorization Act (NDAA) which created a new statutory framework for Defense Acquisition statutes” said Andrew Philip Hunter, from the Centre for Strategic and International Studies’ (CSIS) and the Defense-Industrial Initiatives Group Director, who also participated in the webinar talking about the Reorganization of Defense Acquisition statutes in Title 10. of U.S. Code.

On January 1, 2021, the Congress enabled a one-year phase for collecting comments, feedbacks from experts, stakeholders, and the general public on the reorganization of Defense Acquisition statues in Title 10. of U.S. Code. The webinar took the opportunity to address the call where acquisition experts shared their inputs and comments. The comment collecting on reorganization of the defense acquisition will last for a year and will go into effect in 2022.

“It is a complex body of law that’s difficult to interpret understand and we hope that this reorganization does make the world a better place,” said Phil Rogers, a representative from the DoD.

The importance of reorganization of the technical aspects of Title 10. of the U.S. Code. No 10  were discussed by the experts, who noted that policy changes or moving notes in the legislation should be handled at this phase, adding that a pure technical cleaning-up can eventually open a space to make acquisition statutes user-friendly and well-organized. Moreover, no tactical changes on a language level should be addressed either. It is more of a process than a one-time task, therefore an act of reorganizing can give a sight to the Congress as to what should be done with the notes which follow the provisions.

Moshe Schwartz provided a little background information on how such initiative of reorganization of defense acquisition was born in the 809 Panel of FY 2019 NDAA. Such recommendation was vital because “…the Title 10 of the US code with the primary intent of placing all of the acquisition provisions in a single part currently spread throughout Title 10.

This reorganization will make room for logical order. Provisions relating to a single issue will actually be in the same place and will make them findable”, said Moshe Schwartz.

Samantha Clark shared why it is substantive at this phase to deal only with reorganizing the statues that are spread over the Title 10. of U.S. Code rather deleting anything.

“…if there is this one acquisition that contracting officer has been relying on …if we delete it and then it causes a problem. We didn’t want to delete anything we weren’t absolutely sure” said Samantha Clark

Andrew Hunter noted the need to reorganize statues as a support for the defense acquisition system and a way to identify where is the statute misaligned, incomplete or missing authorities and where the gaps can be filled. For instance, “…Middle Tier Acquisition was created specifically to open up a space to do things outside of the Defense Acquisition Program (MPDA) system because the rules associated with MDAP are in different places in the U.S Code. Some are in the Title 10 while some are not”, said Andrew Hunter.

Answering the question “What are the mechanisms that those outside of government can utilize best to coordinate with the teams that are putting in new language into the NDAA and then implementing the policy inside the Pentagon?” Hunter said: “A legislative proposal from DoD is the way to start looking out for those mechanisms.” On the other hand, Samantha Clark pointed out that, different industries share different viewpoint on interpretation of statues, therefore it is helpful to share with their viewpoints as feedback.”

“What effect this will have on small businesses, new entrants’ ability to access the defense marketplace over time and what will be the overarching effects on supply chain?” was another question posed by the audience.

“It is important to think of the pressures that the Code has on the industrial base. The reorganization will help to make it much clearer, …in many cases statute is a huge barrier to entry, and it keeps people out”, said Hunter.

“It will be helpful to the government in addition to industry because the government wants people to comply. They want trusted secure partners and industry wants to comply because they don’t want any of their systems or supply chain to be compromised”, said Samantha Clark

Answering a question posed by the audience, namely, “what is the possibility of substantive change in meaning of a provision, where might be the risk and how can the writers mitigate that risk?” Samantha Clark highlighted that the risk lies on where Congress were to decide to eliminate those notes. She is in opinion that they can be clarified easily through transparency and messaging.

Read: How realistic is the European Defense Union?

“…reorganization of the defense acquisition would be the transfer and re-designate method before removing any notes that are in the respective legislative texts and the fact that there is a year-long time phase for this to happen is a great opportunity to allow anyone who is interested in the issue to comment”, said Moshe Schwartz

“…this effort is a technical one, but it will support and enable policy related changes down the road”, concluded Hunter.

For those who follow the U.S. Code closely, this webinar can be rated as substantial.

The experts who attended the panel are very in close cooperation with the U.S. government and non-governmental entities. Therefore, their expertise and feedback worth to be taken in account.

The experts explored how the Title 10 of U.S. Code has become a bureaucratic body despite many reform initiatives, and till today disables the defense acquisition systems with its ‘messiness.’

Aynura Babayeva holds her MA from the University of Basel, Switzerland in Peace and Conflict Studies. She has worked also in an education sphere in Geneva, Switzerland and is familiar with the UN system. Currently, she invests most of her time in understanding how a state's agenda is built around spaces of representation when it comes to 'home and belonging' phenomenon. Her areas of interest also cover migration and forced internal displacement.

Also Read
The American Injustice Industry: Why Shutting Down Guantánamo is Not Enough