If justice is to be served, those who murdered Giulio Regeni and thousands of innocent Egyptians, must see their day in court. 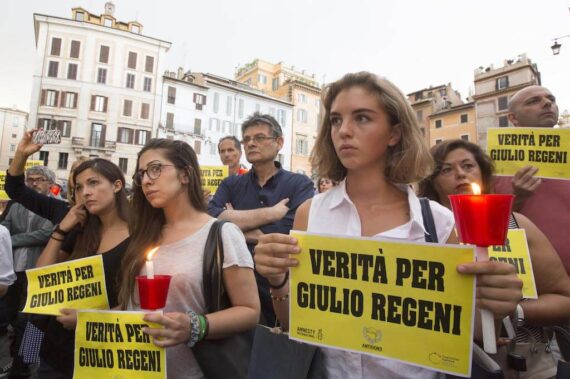 People hold banners during a candlelight procession asking officials to find out the truth on the case of Giulio Regeni, the Italian student disappeared and murdered in Egypt. Photo by Riccardo De Luca, Anadolu Images

It may have taken four years, but the Italian investigation of the killing of doctoral student Giulio Regeni, in February 2016, was conclusive. Regeni was killed at the hands of members of Egypt’s security agency, Italian prosecutors concluded on December 10, 2020. But, the story doesn’t end here.

Since the mutilated body of Regeni was discovered in a ditch by the side of a highway at the outskirts of the Egyptian capital, Cairo, relations between Italy and Egypt deteriorated, or at least it appeared so.

Pressured by relentless Italian media coverage of the grisly murder of the once-promising student, the Italian government was eventually forced to act, especially as the Egyptian government denied any responsibility or knowledge of the circumstances that led to the killing.

In April 2016, Rome recalled its ambassador to Cairo as a show of frustration in the face of Egyptian unwillingness to apprehend the perpetrators. A few weeks later, on April 29, then Foreign Affairs Minister, Paolo Gentiloni, insisted in an interview with the official RAI radio that “a return to normality of relations depends on serious collaboration” on the Regeni case, adding that Italy was “maintaining a position of dissatisfaction”.

What then seemed an uncompromising position became flexible a year or so later, when the country’s new Foreign Minister Angelino Alfano declared, in August 2017, that “it’s impossible for countries that are in front of each other not to have high-level political and diplomatic relations.”

Read: Tortures, Executions, and Sisi’s Unlimited Credibility in the West

Since then, and despite public statements expressing indignation towards Egypt’s reluctance to investigate, let alone take responsibility for Regeni’s murder, relations between the two countries were quickly restored, in fact, thrived in terms of cooperation in military trade and other areas.

Although Egypt is constantly criticized by international rights groups for its systematic violations of human rights, it still remains one of Italy’s major arms importers. Despite a call made by Human Rights Watch to Italy to halt arms sales to Egypt, the flow of weapons continued uninterrupted. On June 11, 2020, for example, the Italian government approved the sale of two warships to Egypt, a decision that was confirmed, despite protestations, in August.

In fact, according to Carnegie Endowment for International Peace, “Italian arms sales to Egypt tripled in 2019, and plans for a series of arms deals for 2020 total €11 billion.”

This hypocrisy in Italy’s handling of Regeni’s case becomes more evident when Egypt’s dismal human rights record is considered. Italian officials and media are now treating the two issues, that of trade and diplomatic ties, on the one hand, and Regeni’s murder and human rights violations, on the other, as if two separate matters.

Italian journalist and writer Corrado Augias arrives at the French Embassy to give back the Legion of Honor to the Ambassador, in Rome, Italy, on December 14, 2020. Photo by Riccardo De Luca, Anadolu Images

While such moral stances are highly admirable, one wonders why this constant emphasis on Egypt’s poor human rights records was absent in Italian media and mainstream intellectuals following the brutal military coup in 2013. It was then that the Egyptian dictator, Sisi, overthrew democratically elected President Mohammed Morsi, killing thousands and imprisoning many more in the process.

Italy is not the only western power that conducts its foreign policy dealings with obvious double standards. Former U.S. President Barack Obama, too, refused to call Morsi’s ouster a military coup at the time. Italy is merely following suit.

The same logic can be applied to this odd separation between intrinsically linked matters, arming the very state that derives its legitimacy through violence.

Italy is not the only western power that conducts its foreign policy dealings with obvious double standards. Former U.S. President Barack Obama, too, refused to call Morsi’s ouster a military coup at the time. Italy is merely following suit.

But the hypocrisy in the Italian case is even more palpable, as the brutality of the regime and refusal to abide by the minimal standards of justice and transparency has affected more than the Egyptians themselves, but an Italian national as well.

Read: How the Egypt’s Judiciary is Aiding the Sisi Regime to Maintain its Oppression

The Italian government cannot plead ignorance, as in not knowing the full extent and persistence of human rights violations in Egypt. Indeed, the Middle Eastern country, aside from Israel, is the most unrepentant human rights violator in the whole region.

In fact, what has befallen the Italian victim, Regeni, is precisely what has fallen on thousands of Egyptians in the last few years. “Despite the continuous demands of the Egyptian authorities for the necessity to stop the use of enforced disappearance against citizens due to its severe negative effects on the disappeared and their families, they do not back down from expanding its use against larger segments of citizens,” the Egyptian Commission for Rights and Freedoms (ECRF) stated in a recent report.

The same sentiment was conveyed by Amnesty International in its 2016-17 report, which covered the time frame of Regeni’s murder and official cover-up by the regime. According to Amnesty, the very National Security Agency (NSA) – which was directly incriminated by Italian prosecutors in December – has “abducted hundreds of people without judicial order and held them incommunicado for prolonged periods, outside of judicial oversight and without access to family members or legal representation.”

And as in Regeni’s case, the Egyptian government “continued to deny that such enforced disappearances occurred”.

The story of Regeni may, on the surface, appear to be a genuine search for justice and a hunt down for his murderers. However, a deeper look indicates that it is also a story of official hypocrisy on the part of the Italian government, and merely one of the numerous tragic murders and forced disappearances conducted by the Egyptian authorities.

If justice is to be served, those who have murdered Regeni, and thousands of innocent Egyptians, must see their day in court. They should include, not only the goons of the NSA, but the very men who are receiving Europe’s highest, but most undeserved, honors.

VIDEO: The Murder of Giulio Regeni and the Politics of the Coverage

Romana Rubeo is an Italian writer and the managing editor of The Palestine Chronicle. Her articles appeared in many online newspapers and academic journals. She holds a Master’s Degree in Foreign Languages and Literature and specializes in audio-visual and journalism translation.