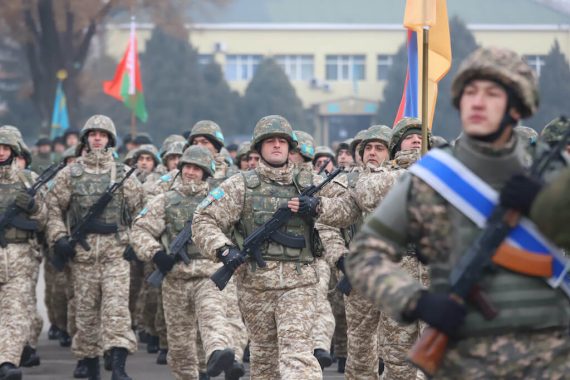 Members of Collective Security Treaty Organization (CSTO) peacekeeping forces attend a ceremony held at the Sagadat Nurmagambetov Land Forces Military University as they have started the gradual withdrawal of troops from Kazakhstan on January 13, 2022, in Almaty, Kazakhstan. Photo by Alihan Sariyev, Anadolu Images

On January 15, 2022, military personnel deployed by the Collective Security Treaty Organization (CSTO) – a Russia-dominated international security organization that in addition to Russia itself includes Kazakhstan, Belarus, Armenia, Kyrgyzstan, and Tajikistan – started to leave Kazakhstan. This operation, officially dubbed a “peacekeeping mission,” involved the deployment of 2,500 paratroopers on the territory of Kazakhstan and became the first event of this type carried out by the CSTO since its creation in 1992.

The operation was launched after Kazakhstan President Kassym-Jomart Tokayev forwarded his official request to members of the CSTO for assistance to deal with massive public protests that ultimately resulted in widespread violence and instability causing massive (in)direct economic losses and dozens of victims and that broke out in Kazakhstan in early January. Mass protests in Kazakhstan, Central Asia’s most stable country economically, started over the government’s unpopular decision to double gas prices, which affected the most vulnerable layers of the Kazakhstani society.

Having started in Zhanaozen (Mangystau Region) on January 2 – a region that has experienced public protests before – under mainly economic slogans, the protests soon spread to all major cities, despite the fact that Tokayev dismissed the government and ordered that gas prices return to their previous level. The protests reached their culmination in Almaty, where events took a particularly dramatic turn.

In his official statement, Tokayev called protesters “bandits and terrorists,” stating that “foreign states” had masterminded the protests and were organizing a de facto foreign invasion of the country. Tokayev’s opinion was immediately shared by leaders of both Belarus and Russia, where President Vladimir Putin classified events in Kazakhstan as “aggression of international terrorism.”

After several days of instability that witnessed, among others, multiple instances of vandalism, despicable violence, and full-fledged street fighting between the protestors and the Kazakh security forces, Tokayev managed to take control of the situation in all major cities and Kazakhstan started to return back to normal life gradually. While neither the circumstances of the tragic events have been fully revealed nor is it completely apparent how the Kazakhstani domestic milieu and foreign policy will evolve, three macro aspects should be highlighted.

First, the completion of the (para)military mission in Kazakhstan by the Russian-led CSTO is a vocal claim that this organization – unlike the Commonwealth of Independent States (CIS) or similar projects – is a living entity whose operational scope and ambitions are likely to expand. It is also quite clear that when attempting to increase its influence in Central Asia, Russia, in light of the absence of other trump cards, is likely to rely increasingly on its so-called security export mechanism, i.e., Russia’s use of (para)military help and assistance to other countries facing security threats and challenges.

In this configuration, the CSTO – not, say, the Eurasian Economic Union, a quasi-economic project – will become the key element that is likely to be used by Russia in pursuit of its geo-economic and geopolitical objectives in areas of strategic interest, including Central Asia. Prospectively, Russia could also expand the geographic boundaries where the CSTO might launch missions with Belarus, where the domestic situation is rather unstable, and Armenia, in the case of a new conflict with Azerbaijan, becoming potential new areas.

Second, the CSTO’s mission has avidly showcased Russia’s rapidly increasing strategic interest in restoring its presence and influence in Central Asia, which is strategically important in terms of security as well as economically and geopolitically, and which is frequently referred to as Russia’s “soft underbelly.” Following the 1990s and the 2000s when Central Asia occupied marginal attention in Russia`s foreign policy thinking due to both lack of resources and Moscow’s Euro-Atlantic enchantment, now, with Russia’s growing “Pivot to Asia” strategy, this macro-region is playing an increasingly notable role in Russia’s foreign policy agenda.

Furthermore, with the development of China’s Belt and Road Initiative and other regional economic initiatives such as the Turkmenistan–Afghanistan–Pakistan–India natural gas pipeline project, the region’s strategic geo-economic/political value for Russia will only increase. At the same time, the fact that Moscow took the lead and sent elite military personnel to Kazakhstan highlights the fact that it no longer shies away from using all means at its disposal in pursuit of its strategic interests in Central Asia, specifically, and in the post-Soviet space, in general.

Third, the current mission of the CSTO in Kazakhstan might not become the last instance when the organization`s resources are used in Central Asia. It is highly likely that with Russia`s growing interest and involvement therein, the macro-region, which is rife with ethnic-religious conflicts and permeated with disagreements that have recently (once again) resulted in a (para)military conflict on the Tajik-Kyrgyz border leading to multiple casualties, might soon become a battleground between powerful players once again.

Indeed, Central Asia is a resource-endowed and strategic geographic location which is indispensable for establishing steady logistical ties between the East and West, and that once again has turned into an intersection of the strategic interests of such powerful players as Russia, China, Turkey, Iran, India, Pakistan, and the United States as well as a space for the emerging risks and uncertainties posed by the Taliban rise to power in Afghanistan.

Central Asia is a resource-endowed and strategic geographic location which is indispensable for establishing steady logistical ties between the East and West.

In light of all the above, another important aspect needs to be underscored: on January 10, 2022, Alexander Lukashenko unequivocally, and somewhat unexpectedly, warned the Uzbek authorities that they have to consider seriously the prospect of a repetition of events similar to Kazakhstan’s on their territory. Apparently, this statement, which was firmly rebutted by the Uzbek political leadership that stated that the country has enough resources to deal with a similar crisis was meant to convey the idea (arguably, circulated from Moscow) that Uzbekistan should consider (re)joining the CSTO – Uzbekistan was once a member of the CSTO but left the organization on two occasions, in 2006 and 2012.

Interestingly enough, when following events in Kazakhstan, part of Uzbek intellectual circles and the policymaking community while generally supporting Shavkat Mirziyoyev’s confidence in Uzbekistan’s ability to solve problems independently still argued that in case the challenge would exceed these capabilities “Uzbekistan might ask the Russian Federation, as its ally, for help and assistance.”

Finally, it is quite curious to note that only several months ago Russia, whose economic potential and “soft power” in Central Asia are considerably lagging behind actors such as China that exerts influence via the Belt and Road economic mega project and Turkey whose influence is premised on ethnic-cultural and religious pivots, seemed to have very few competitive advantages in the macro-region. Today, the situation appears to be getting more complex and challenging.

The fact that the Kazakhstani president requested assistance from the CSTO – aka Russia – and not any other international organization, including, for instance, the Shanghai Cooperation Organization (SCO),  is very telling. In the case other countries encounter similar problems, Kazakhstan might have cast a long shadow in the greater region.