The Donbass crisis is a test of NATO’s deterrence capacity and capabilities. The quicker Washington starts accepting multipolar realities, the faster it can begin to recalibrate the North Atlantic Alliance. 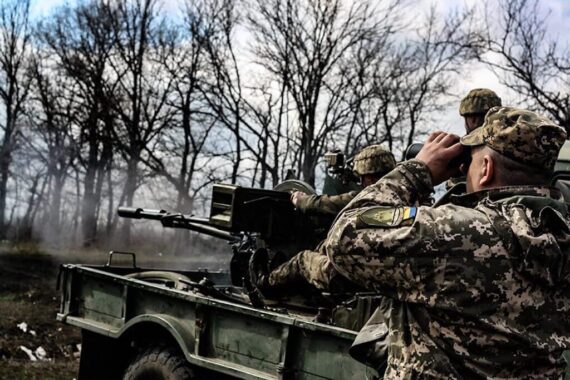 Ukrainian army conduct a drill with military tanks while military activity continues in the Donetsk region, Ukraine on April 24, 2021. Photo by Armed Forces of Ukraine via Anadolu Agency.

The rising tensions between Russia and Ukraine after Moscow’s annexation of Crimea and the occupation of the Donbass region in eastern Ukraine in 2014, were eased in marathon peace negotiations that resulted in a new ceasefire in 2015. Sixteen-hour-long talks between Russian President Vladimir Putin, Ukrainian President Petro Poroshenko, French President François Hollande, and German Chancellor Angela Merkel in the Belarusian capital of Minsk succeeded in securing a deal between Moscow and Kiev.

But, when Russian troops amassed on the eastern Ukrainian border in March 2021, tensions rose again, causing concerns that there might be a new military conflict in the Black Sea region. Once again, Eastern Ukraine turned out to be one of the world’s fragile regions.

The main actors were, of course, Russia and Ukraine. But a round of talks in April 2021, which came to be known as the Normandy Format, involving political advisors and diplomats on how to implement the Minsk Agreements in Eastern Ukraine brought France and Germany on board again. The U.S. administration was quick to join the theater and openly supported Kiev, in the name of containing Russia.

The continuing naval activities of the Russian navy in the Black Sea resulted in Turkey also becoming involved. Ankara, having the second-largest army in NATO, perceived the latest developments as a threat to its national security and geostrategic importance in the region, not to mention its bilateral relations with both Kiev and Moscow.

Today, the tensions between Russia and Ukraine appear eased especially after U.S. President Biden called Russian President Putin, and urged him to reconsider deploying more troops near the Ukrainian border. Even though Putin said the troops are there to conduct military drills, the potential of a summit between the two leaders in a third country is a sign of easing tensions.

The latest developments in the Black Sea region specific to Ukraine show that this escalation has a multiplayer and multilevel nature.

Zelensky is feeding the crocodiles

So, the question is if Ukraine had not turned to the West and didn’t want to be both a member of NATO and the European Union, would Russia rule out its interest in Donbass and its expansionist policy? The answer to this question varies according to the priorities of the parties concerned, but generally speaking, one can safely predict that Russia would not hesitate to continue its aggressive policies against Ukraine given its historical, demographical, and geopolitical advantages.

When Ukrainian President Vladimir Zelensky was elected in 2019 by almost 73 percent, he promised to put the fire out in Donbass and directly negotiate with Russia to end the conflict. In fact, he moved forward in the opposite direction than his predecessor, Petro Poroshenko, by signing agreements with Russia in the security and humanitarian fields.

First, Zelensky pulled out some of the Ukrainian troops in Donbass, which was seen as a pro-Russian gesture by Moscow. The move was an effort to gain Moscow’s trust, but as Winston Churchill once stated, Zelensky was acting as an “appeaser” – in other words, like “one who feeds a crocodile – hoping it will eat him last.”

Read: Supported by the US, Ukraine is Once Again Dreaming of NATO

Zelensky went along with Ukrainian politicians who had business relations with Russian oligarchs and even appointed them in positions at the Ukrainian presidential office. But in the beginning of 2021, things started to change. Zelensky’s moderate policies towards Russia during his first two years in office gave him some leverage, but the same policies also strengthened his political opponents in domestic politics. Especially Zelensky’s soft tone regarding Donbass increased the criticism that he was not doing enough to protect Ukraine’s interests in the east of the country.

A change across the Atlantic

At the same time, things were changing across the Atlantic. Joe Biden was inaugurated as the 46th president of the United States with a desire to contain Russia and China, contrary to his predecessor Donald Trump who is widely criticized for doing nothing to block Russia’s growing influence. Biden’s vision states, “We will repair our alliances and engage with the world once again” –  the words Zelensky most probably needed to hear. The time had arrived for Zelensky to look for support from the U.S. and NATO. In the meantime, Ukraine upgraded its military capabilities by signing deals with Turkey and procuring drones and naval corvettes. In addition, the EU and U.S. logistic and weapon systems were ready to offer support.

Zelensky started to put pressure on Russia-backed officials and media moguls to decrease Russian influence in the media. His next move was to build up Ukrainian troops along the disputed areas. This new strategy increased his popularity among Ukrainian nationalists in the country’s west, and even the number of the enlisted soldiers rose dramatically.

On April 2, 2021, Zelensky got the direct support he was looking for. After a phone call with U.S. President Biden, the White House announced that the president affirmed the United States’ unwavering support for Ukraine’s sovereignty and territorial integrity in the face of Russia’s ongoing aggression in eastern Ukraine and Crimea. Zelensky shared his gratefulness on social media. He stated, “The American partnership is crucial for Ukrainians.”

Ukraine’s aspiration to become a member of NATO and EU also resurfaced. Kiev openly stated that it wants to hasten its membership of NATO. This time, however, the U.S. and EU were walking on eggshells: they knew very well what happened when former U.S. president George W. Bush campaigned for offering a Membership Action Plan (MAP) to Georgia and Ukraine during the NATO Summit in Bucharest in April 2008.

It turned out to be a test for NATO and in the end, Abkhazia and South Ossetia, Georgia’s disputed territories, became the theater for an arm wrestling match between Russia and the West. Ultimately, this led to Moscow’s recognition of the independence of these territories on August, 26, 2008, after short but heavy clashes.

Zelensky’s new strategy increased his domestic support especially in Ukraine’s west, while also gaining U.S. and EU support by spotlighting the Donbass issue rather than that of Crimea. In addition, Zelensky has analyzed Turkey’s stabilizing role against Russia in the Black Sea very well and he chose not to cancel his scheduled meeting on April 10, 2021 with Turkish President Recep Tayyip Erdoğan during the start of the latest crisis.

Zelensky got what he wanted when the Turkish president declared, “We believe that the current crisis must be resolved through peaceful and diplomatic means, based on the territorial integrity of Ukraine and international law. Our cooperation is by no means an initiative against third countries.”

While Zelensky was trying to include more players in the crisis with his new strategy, Russian leader Vladimir Putin remained confident. He continued to play with the nerves of the international system, as he has done in Georgia, Syria, Libya, and South Caucasus in the absence of effective U.S. leadership.

Moscow was pretty sure that the U.S., the EU, and, of course, NATO would not give enough support to Ukraine. What is more, Russia predicts that the West will not go to war in favor of Ukraine and will abandon Kiev just as it abandoned Tbilisi during the Georgian conflict.

Now, after more than a decade, Vladimir Putin is once again testing NATO and its leading member, the United States – this time over Ukraine. Is the Alliance strong and dynamic? Can it back up its rhetoric? Is U.S. President Biden the coalition builder he claims to be?

In the past decade, Moscow has made inroads with NATO member states. Nord Stream 2, a system of offshore natural gas pipelines running under the Baltic Sea from Russia to Germany, is important for Germany’s energy security and the Russia-France relationship is also growing. At the same time, Moscow has a multilayer relation with Turkey, and both capitals can compartmentalize their differences to keep the relationship going.

As the world shifts to a multipolar order, ever more NATO members will inevitably establish and improve their relations with Moscow, which forces U.S. President Biden to work harder to shore up the alliance.

The Donbas crisis is a test of NATO’s deterrence capacity and capabilities. If the alliance fails this test once again, it will have future ramifications on Baltic security and the alliance’s enhanced future presence. Washington should rethink how it can contain Russia if it sanctions its strongest allies in Europe and the Middle East. The quicker Washington starts accepting multipolar realities, the faster it can begin to recalibrate the North Atlantic Alliance.