Turkey can provide security guarantees to both Riyadh and Abu Dhabi through its effective drones. 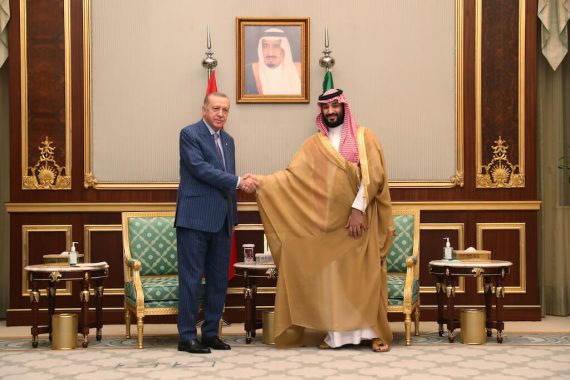 The meeting between Turkish President Recep Tayyip Erdoğan and Saudi Crown Prince Mohammed bin Salman on April 28 at al-Salam Palace in Jeddah marks a sea change in the two countries’ relations which had reached a nadir after several events in the past.

In the last two decades, Middle East politics experienced ups and downs in Turkish-Saudi relations, one of the most complex in the region. For some time, both sides have been working to fix the broken ties. In particular, last month saw an acceleration of diplomatic efforts which eventually bore its fruit with the April visit.

Later, Saudi Chief of General Staff Fayyad bin Hamed Al-Ruwaili visited the Turkish pavilion at the Doha International Maritime Defence Exhibition and Conference (DIMDEX) in Doha. After these developments, in a televised interview, Çavuşoğlu said that “concrete steps” were on the way to mend ties with Saudi Arabia. The decision of a Turkish court to transfer the Jamal Khashoggi case to Saudi Arabia after Riyadh’s request was a step in the direction of normalization.

Besides these bilateral efforts, what were the driving forces behind the idea of restoration of relations? The short answer is that Turkey and Saudi Arabia face concurrent challenges in their domestic and foreign policies, and therefore, both consider the rapprochement as pragmatic and realist. The longer answer is that this rapprochement is driven by several internal, regional, and international dynamics.

Turkey needs to regain its friends in the region. In domestic politics, the country is facing an economic crisis and heading towards a critical presidential election scheduled for next year. Saudi Arabia, which also faces the economic consequences of COVID19, aims to invest in accordance with its “Vision 2030.”

In doing so, Saudi Arabia needs to have other regional actors—most notably Turkey—on its side amid the changing geopolitical landscape. Turkey, which has been affected by an unofficial Saudi trade embargo since 2020, aims to increase its exports to the kingdom. According to the data shared by the Turkish Exporters’ Assembly (TİM), Turkey’s exports to Saudi Arabia jumped by 25 percent in the first quarter of 2022. Even though the amount is miniscule compared to what it was in 2020, it was a clear sign that Riyadh is easing pressure on Ankara after months-long behind-the-door talks.

On the regional realm, the easing of tensions between Qatar and the Gulf countries with the signing of the al-Ula Declaration, the launch of normalization talks between Turkey and Egypt, the weakening of the influence of the Muslim Brotherhood, and the Iran nuclear talks were significant motivational factors behind the Turkish-Saudi thaw. Most importantly, the two countries understood that military-based foreign policy is not a way out, and is economically and diplomatically detrimental to all parties.

Lastly, on the international dynamics, U.S. President Joe Biden’s messages to both Turkey and the Gulf allies, and the disquieting risks of the ongoing Russia-Ukraine war have pushed Ankara and Riyadh to put their differences aside and focus on the urgent challenges to their national interests. Both leaderships are critical of what they see as weak American leadership, not least because of the nuclear talks between Washington and Tehran.

Read: Why the UAE is Denouncing Israel’s Brutality

A closer look at how Erdoğan’s visit was read in Saudi media and by Saudi analysts indicates that, in general, Saudi Arabia regarded it as a “new beginning” in relations, while acknowledging that the two countries have not yet abandoned their foreign policy goals.

That’s why Turkey’s approach to Saudi Arabia was mostly read through the economic paradigm. For instance, prominent Saudi analyst Ali Shihabi, whose father served as an ambassador in Ankara for long years, regarded Erdoğan’s visit as a win by Saudi officials who are keen to turn the page.

He also referred to economic motivations, saying that both countries will benefit from this visit. “Turkey needs the trade and tourism flows from Saudi Arabia, and Riyadh would prefer to have Erdoğan ‘on its side’ on a variety of regional issues, and may even buy arms from Turkey.” Ankara is aware of Riyadh’s defense needs, and expects to attract Riyadh’s attention on this matter.

Although Turkey’s desire was not to rally against Saudi Arabia during the Arab Spring, the geopolitical landscape and their ambitious policies pushed the two countries apart. The conflicting policies caused a trauma in the bilateral relations with a resulting stiff political rivalry and a reciprocal antagonistic discourse.

Although Turkey has entered into a rapid reconciliation process with its previous foes, including the United Arab Emirates, Egypt, and Israel, restoring relations with Saudi Arabia was the toughest nut to crack. This was because the relations saw a gradual deterioration and held deeper problems when compared to other bilateral relations.

This was also visible in the lack of Saudi enthusiasm toward a rapid reconciliation with Turkey. Erdoğan’s visit was publicized several times but had been postponed. The visit was thus moved from February to March and finally to April. This week’s visit, taking place during the last week of the holy month of Ramadan, was also symbolically significant. In particular, Erdoğan’s meeting with Mohammed bin Salman was read as a warm welcome in Riyadh that befits Saudi hospitality traditions.

What Riyadh expects from Turkey on a regional level

Major issues that led to the tension between the two countries are not present anymore or have been partially resolved regarding the regional and international dynamics, be it the Cairo-Ankara rift, the Muslim Brotherhood issue, or the Gulf crisis. However, there are still some minefields. To avoid these, the rapprochement is expected to start with trade and business followed by a political cooperation based on the assessment of the progress achieved.

Riyadh might consider the political rapprochement with Ankara as an important step toward a broader anti-Iran bloc. Also, it might consider Ankara’s backing of its military campaign in Yemen in light of the latest Houthi escalation. Turkey has harshly condemned the Houthi attacks on the Gulf countries and has stressed that it attaches as much importance to the Gulf’s stability and security as it does to its own. Turkey can provide security guarantees to both Riyadh and Abu Dhabi through its effective drones.

Foreign policy in Saudi Arabia and Turkey is mostly driven by personalities, not institutions. Leaders play highly important roles in shaping and directing policies, and they prefer not to speak in public extensively about what goals they seek and how they intend to pursue them. Therefore, the success of the rapprochement between Saudi Arabia and Turkey will be based primarily on what concrete steps the two countries take in the following days both on the bilateral and regional level.