Experts argue that the left is re-emerging in South America. 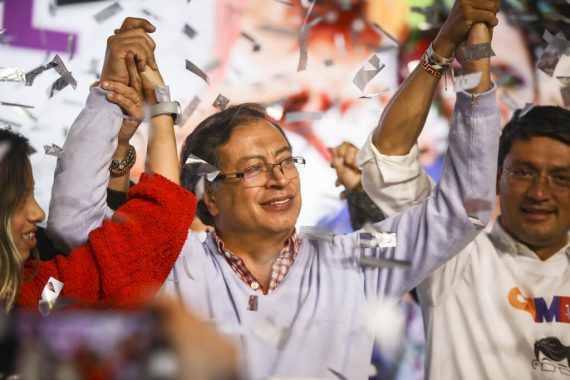 Gustavo Petro, the favorite for Colombia's May presidential election, ensure the nomination of the left-wing Historic Pact coalition during voting in primaries in Bogota, Colombia on March 13, 2022. Photo by Juancho Torres, Anadolu Images

López Obrador, who has been serving as president since his election victory in 2018, won the referendum conducted to decide whether he should step down or finish his six-year term in September 2024. In Mexico, presidents are limited to a single term of six years in office.

Although turnout rates were meager, López Obrador won almost 90% of the votes with only 18% of the eligible voters showing up on the day.

Before the referendum, his approval rating was 60%.

Opposition parties claimed that the president could use this landslide referendum to extend his six-year term. In a video message, López Obrador said, “I’m going to continue serving until the last day of my term. I’m not going to go past that because I’m a democrat, and I’m not in favor of re-election.”

Colombia turning to the left?

Colombia offered further proof of the rising left in Latin America with Gustavo Petro winning the primary presidential election with a landslide. Petro was defeated by Ivan Duque in 2018. Since then, the country has entered a complex phase, especially with economic inequality rising due to the COVID19 pandemic.

Colombia was shaken by mass protests in 2021. Polls show that many voters are dissatisfied with the current elected leader and Petro’s chances to be elected in the upcoming elections are increasing.

On May 29, 2022, the first round of Colombia’s presidential election will be held.

Will a former guerrilla member become a president?

Gustavo Francisco Petro Urrego was born in a small town in northern Colombia in 1960. His family migrated to a bigger town, where he later studied at the La Salle public school. Petro studied economics at the Universidad Externado de Colombia and after his graduation, he continued his education at Escuela Superior de Administración Pública (ESAP). Later, he earned his master’s degree in economics.

While at school, he got involved in politics and became a member of M-19, a Colombian guerrilla organization. During the 1980s, he was tortured and imprisoned for being part of the organization.

Later, the organization evolved into a political party in which Petro participated as a member in the 1990s.

In 1994, he was appointed to the Colombian embassy in Belgium as a diplomatic attaché for human rights, a position he held until 1996.

In 2002, Petro was elected to the Chamber of Representatives of Colombia, representing Bogotá, the county’s capital. Later, in 2006, he was re-elected as a senator in an election that saw the second highest voter turnout in the country.

His aspiration to become president started with the 2010 presidential election, where he ranked fourth in the election race, receiving 9.1% of the total votes.

Between 2012 and 2015, he served as mayor of Bogotá. During his tenure, there was a significant reduction in homicide rates, reaching a number that had never been seen in the previous two decades.

In the 2018 presidential election, Petro came second and lost the election to Iván Duque Márquez, the current president. However, he received eight million votes—the highest number ever to be won by a leftist candidate.

Petro is currently serving as a senator (2018-2022). In the presidential primaries on March 13, 2022, he received almost four million votes, double the number of votes won by his opponents. The 61-year-old politician became the presidential candidate for the coalition Historic Pact for Colombia by public vote.

In 2021, a poll published by Invamer showed that at least 75% of Colombians disapproved of Duque’s leadership style, making him the most unpopular leader in the country’s history.

Duque’s popularity crashed when social unrest across the country evolved into anti-government protests, killing 43 civilians in 2021.

The end of right-wing politics in Latin America?

Experts argue that the left is re-emerging in Latin America, especially after the COVID19 pandemic, which saw living conditions worsen.

After years of right-wing neoliberal dominance, many Latin American countries are moving towards left-wing politics. The movement is often referred to as the “pink tide,” which speaks of the regional change towards the left in Latin America after Hugo Chavez came to power in Venezuela in 2000.

During the 2010s, conservative parties gained significant ground in Latin America. At the time, many people had shifted away from left-leaning politicians. However, the tide started to change again when López Obrador won the election in Mexico on December 1, 2018. Subsequently, in Argentina and Bolivia, left-leaning governments came to power.

The tendency very much continued in the following years: Pedro Castillo, a socialist union leader, was elected in Peru on July 19, 2021. Pedro was followed by Xiomara Castro in Honduras in January 2022. Gabriel Boric, the current president of Chile, was elected in March 2022 and hit the headlines worldwide.

Colombia follows suit and is turning away from traditional right-wing politics, with Gustavo Petro winning the presidential primary on March 14, 2022.

In Colombia, many polls suggest the sexagenarian former guerilla is close to winning the upcoming May election. If no candidate reaches 50% of the votes on May 29, the top two will battle it out in a second round.