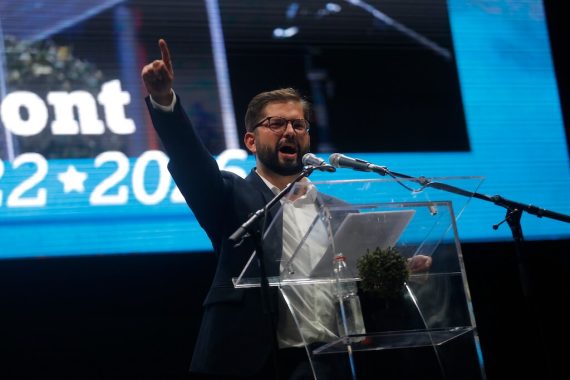 For Latin America’s political map, the weekend of March 11-13 was historical. On Friday, March 11, 2022, in Chile’s capital, Santiago, newly elected president Gabriel Boric and his cabinet assumed power in the Andean country, with a recent past of intense social turmoil. On Sunday, March 13, the Colombian people too elected their legislative body and a number of parties decided by popular vote their final candidates for the presidential election on May 29.

With COVID 19 gradually receding, the challenge of the incoming presidents in Latin America will be addressing the aftermath of the pandemic’s catastrophic implications of over the last two years.

In the last decades, both Colombia and Chile have been ruled by what could be described as right-wing neoliberal governments. Boric, a former student leader whose role in the social struggle throughout the past years in Chile has been recognized, rose to power with a promise of bringing about structural social changes in the economic spectrum, pensions, abortion, gender issues, migration, and other sensitive issues for the Chilean people.

Feared by the traditional Chilean power centers, Boric is now facing critics from his own leftist base who voted him in mainly due to his moderate stance regarding the Russian invasion of Ukraine, which he recently condemned, the same as he had condemned autocratic leftist Latin American governments such as Nicaragua.

Boric’s positions in the early days of his duties in office seem less radical than what voters from, for example, the Chilean Communist Party would have expected them to be. It is clear that for Boric to have a grip on power in Chile, he must distance himself from radical postures and somehow calm the traditional elites without submitting to them. The fact that he is 36, one of the youngest presidents in the world, puts some extra pressure on him.

The continent’s youths seem to have awoken from a long lethargy and the fact that the young man, known as a student who took to the streets in Chile, a country shattered by the violence of a prowling dictatorship became president is significant. Boric has to prove that the future is better in the hands of those who stand a higher chance to be part of it.

On the other hand, Colombia, the third most populated country in Latin America after Brazil and Mexico, is facing a serious possibility of electing a leftist president, who has a grassroots base, far from the country’s traditional ruling oligarchic elite.

Gustavo Petro is leading surveys for the presidential elections taking place on May 29. Petro is a congressman and former mayor of the Colombian capital of Bogotá who has fiercely denounced the links between politicians and paramilitary groups. In the 1980s, he was a member of the guerilla group M19 which was an insurgent force that later evolved into the political party Alianza Democrática M-19.

A vast majority of Colombians are deeply disappointed, and to some extent deceived, by the current government headed by Iván Duque, who is considered a disciple of former president Álvaro Uribe, whose influence on the Colombian political spectrum is quickly fading away. Petro, who might be Uribe’s most competitive antagonist, had already run for president in 2018, losing in the second round to Duque in what many of his supporters still insist was a fraud.

The March 13 primary elections in Colombia helped cast a denser shadow over the results of the 2018 election. A few days after the primary elections’ results were released in 2018, Petro’s party, Pacto Histórico, had gained at least 390,000 votes as “found” by his party’s election witnesses body, after electoral observers reported irregularities.

So even though the leftist parties may still not have a majority in Congress, they will definitely have a larger representation than they did in the past four years. This scenario could lead to Petro’s presidency, giving him a strong legislative support, but, as Boric did in Chile, he will necessarily have to bargain with the traditional parties to develop his social agenda, through flirting with the Colombian electorate.

Still, there’s nothing sure for Petro in a country where the political and social establishment is not used to losing and the right-wing candidate, Federico Gutiérrez, has all the political machinery on his side.

During the pandemic, Chile and Colombia experienced drastic social unrest, rarely seen before, despite their violent histories. The ruling regimes in both countries failed to deliver welfare to their peoples in the midst of the pandemic. Latin America is a region plagued by social inequalities where natural resources have been exploited for the benefit of foreign multinational companies with the complicity of local elites. Poverty levels and crime rates skyrocketed in most Latin American countries.

Politically, the subcontinent has oscillated between populist governments simplistically labeled “leftist” or “right-wing.”

Countries like Argentina have been oscillating between both extremes without achieving sustainable prosperity. Mexico’s leftist President Andrés López Obrador, who after three attempts, snatched power from the conservative ruling parties, still keeps a relatively healthy level of popularity among Mexicans, but violence is rampant and social inequalities are more than evident.

Likewise, other Latin American countries also fail to find continuity in state policies that would translate in social conquests redounding to better conditions for their citizens. The roots of inequality and social injustice in Latin America are profoundly and intimately related to its colonial history and the process to transcend it is tortuous and slow-moving compared to the people’s needs.

The recent developments this year in Chile and Colombia as well as the possibility of Brazil following their footsteps in their elections in October may give birth to a new hope in the region. An essential issue that the new governments must approach is the resumption of diplomatic ties between South American countries, shattered by the influence of the United States.

For instance, Venezuela has no ties today with Colombia and Brazil, two of its most important and increasingly relevant neighbors. The three countries share key challenges like migration and economic development.

Without the possibility of basic communication between neighboring governments in South America, it is impossible to build a solid ground for progress. All of these developments will necessarily find themselves framed under a geopolitical situation in which the antagonism between Russia and the West is reaching a peak not seen in decades.

Latin America, which has been in both the United States’ and Russia’s orbits since the mid-20th century, will have to learn to deal with this situation. After all, as some Latin American intellectuals have expressed on different occasions, a third way could only serve the interests of the Latin American peoples. Only time will tell whether Latin American leaders will understand this equation.