Offenders don’t consider their behavior as a crime as in most of the crimes against women, including stalking. 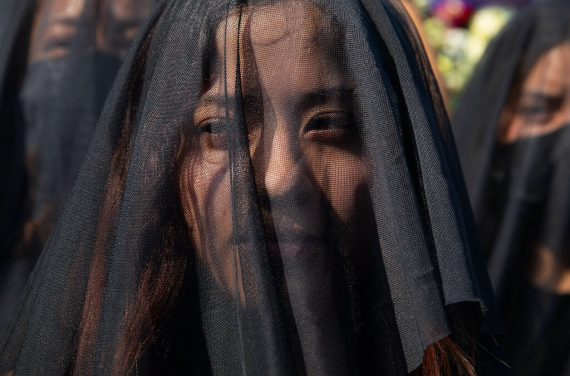 A woman wearing a black veil takes part in a protest against femicides and violence against women, in front of the National Palace, in Mexico City, Mexico on May 18, 2022. Photo by Daniel Cardenas. Anadolu Images.

It is becoming increasingly widespread for women to fall victims of violent gender-motivated attacks. According to the United Nations, globally, one in every three women aged above 15 experience either physical or sexual violence at least once in their lives. This means that 736 million people on Earth are victimized.

It is noteworthy that women become victims of violence solely because of their gender. There are many regulations and mechanisms established to combat violence against women at national and international levels. The number of scientific research projects on the subject increases as well, providing a substantial amount of data on the causes behind violence against women.

The UN data on violence against women gives a striking statistic, according to which in 2018, one out of seven women between the ages of 15 and 49 was subjected to physical or sexual violence by an intimate partner. There is a similar picture regarding femicide. In 2020, 58% of a total of 81,000 women lost their life globally at the hands of their partners or family members. This means that every 11 minutes a woman was killed by her partner or family member.

Read: How Women Are De-Humanized

Women falling victim to their intimate partners or male relatives shows that violence is also fed by and is relatable to cultural norms. This is a reflection of the deep-rooted present-day reality that men continue to dominate the hierarchy structures across societal sectors. This is also obvious in daily life where in the majority of families traditional gender-based roles prevail.

Women being targeted by their intimate partners makes it more challenging to combat violence. Close contact and privacy between the victimizer and the victimized make women more vulnerable to violence, and cause delays in detecting and preventing violence. Another culturally specific factor is that some people regard violence as a legitimate or reasonable means of handling problems occurring in personal relations.

Yet, with the exception of self-defense and the state’s monopoly on violence, violence is utterly illegitimate and breaches the rule of law. Under all circumstances, violence must be rejected including violence directed against women and children.

What does the “Will Smith incident” tell us?

A recent incident has revealed that people’s attitudes towards violence are not consistent. World-famous actor Will Smith’s slapping of comedian Chris Rock following an unpleasant joke he made about his wife at the Oscar awards ceremony was appreciated by many social media users from different socioeconomic backgrounds. Reactions concentrated on points like “Rock deserved it” and “Smith was defending his wife’s honor.”

Here, we have to remember the principle that violence is a tool that can only be used when one is exposed to a physical attack. Smith, or anyone else in the same situation, should have reacted verbally to Rock or left the hall. Yet, his use of brute force left the masses enchanted. This shows us how much people have internalized the phenomenon of violence, and is part and parcel of the same mentality behind violence against women.

Can sociology help solve this problem? A collective mentality shift is needed to eliminate the factors causing violence. There are many tools to end violence ranging from the education of parents and children to social awareness campaigns. However, this type of change could take several decades and today’s problem is urgent.

Punitive measures come to mind first as an immediate solution. Criminal law provides the immediate protection that women need. It can also help to change the mentality through enforcing and compelling.

Read: Facing the Political Histories of Islamophobia and Anti-Arab Racism in Canada

Stalking is a fast-evolving threat

Stalking refers to “the act or crime of willfully and repeatedly following or harassing another person in circumstances that would cause a reasonable person to fear injury or death especially because of express or implied threats.” This is a relatively new form of violence and targets especially women. As technology advances, stalking becomes easier.

According to the National Center for Injury Prevention and Control (NCIPC) in the United States, 31.2% of women—twice the rate of men—have encountered stalking at least once in their lifetime. In specific, 32.4% of women in Australia, 23% in Britain, and 19% in Germany have been exposed to stalking. According to a 2015 study in Turkey, 27% of women encounter stalking at some point in their lifetime.

Many studies show that stalking pushes women into a dark tunnel that ends with physical and sexual violence, or with femicide. In the U.S., the rate of women who are stalked by an intimate partner and also physically attacked by the same offender is as high as 81%. In fact, stalking is considered a crime in many countries such as Britain, the U.S. (across all states), France, Germany, Italy, the Netherlands, and Spain and Turkey.

Prison sentences are a vital instrument to deter stalking. However, a study in Britain shows that the option of rehabilitating offenders should not be ignored. The mixed method of imprisonment and rehabilitation can be extended to other crimes of violence against women in order to rehabilitate offenders and minimize the risk of reoffending.

As in most of the crimes against women, including stalking, offenders don’t consider their behavior as a crime. A woman’s existence as an independent individual and one that is equal to a man is still a very modern phenomenon. The only way forward is to change harmful and archaic mentalities.

Mert H. Akgün is a law and human rights researcher at the SETA Foundation. He got his Bachelor's degree from Ankara University, Faculty of Law. He completed his Master’s degree at Hacettepe University, Department of Public Law, with his thesis titled “The Parliament’s Tools for Supervising the Executive Body after the 2017 Constitutional Amendments”. He is doing Ph.D. at Public Law at Ankara Hacı Bayram Veli University. His research interests include forms of government, democratization, new constitution studies, legislative activities, judicial reforms, and human rights.