Today, while the Lebanese sectarian system is discriminatory par excellence, whether between the Lebanese themselves or against the “other,” it is an inaccurate assertion to say Lebanese are racist. 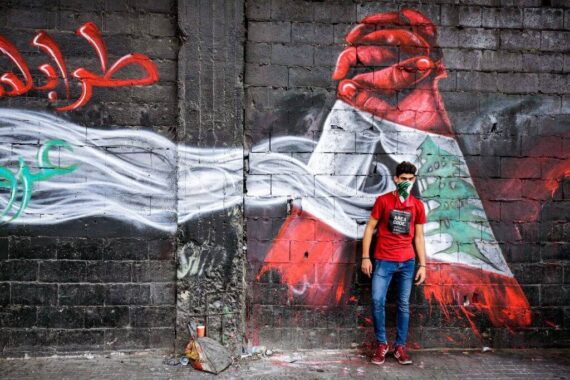 A youth posing by a graffiti depicting two hands holding each other, both painted in the colours of the Lebanese national flag, by Palestinian refugee Ghayath al-Rawbeh, painted on a wall at al-Nour Square in the city centre. Photo by Ibrahim Chalhoub, AFP via Getty Images

The most recent major and public act of racism Syrian refugees faced in Lebanon, dates to December 27, 2020, when hundreds of them—75 families according to local news—had to flee for their lives from a makeshift camp in the Miniyeh region near the northern coastal city of Tripoli after their tents were set alight. The incident came against the backdrop of a fight between camp residents and members of a local Lebanese family.

In November 2020, a Syrian refugee allegedly killed a Lebanese resident in Bcharre, a town in the North Governorate of Lebanon. Soon after, a group of Lebanese residents went on a witch-hunt, demanded the eviction of Syrians from the area—even the ones who lived and worked there prior to the Syrian refugee influx—and set fire to their homes in the town.

While the list goes on, two examples in two consecutive months and from two Lebanese regions with different sectarian undertones, are evidence to extrapolate about the multi-layered acts of racism Syrian refugees face in Lebanon.

Nevertheless, slapping the word racism and Lebanon on any search engine shows us that racism in the country is not a new phenomenon simply synonymous with the influx of Syrian refugees following the violent crackdown by the Syrian regime on the 2011 revolution. Racism in Lebanon is one form of discrimination that is rampant and mainstream, while other forms extend to classist discrimination, sectarian, geographic, and so on. However, racism specifically against Syrians could be traced back to the country’s “founding moment.”

While Lebanese racism is not strictly directed towards Syrian refugees, the article aims to tackle discrimination against Syrian refugees in particular. Nevertheless, Syrian and Palestinian refugees paid the brunt for the “founding narrative” and fragility of the Lebanese state that was envisioned during the process of its insurrection following the first World War.

Modern-day Lebanon was initially formed between 1918 and 1926 from the debris of “Ottoman Syria” at a time when the victors of the World War, Britain and France, were “redrawing” the map of the modern Middle East and divvying the spoils among them.

Primarily, it was the French who put the territory of Lebanon together and organized it as a state, laying the foundation for the autonomous “Mutasarrifiyya” of Mount Lebanon within the framework of “Ottoman Syria” in 1861.

In November 2020, a Syrian refugee allegedly killed a Lebanese resident in Bcharre, a town in the North Governorate of Lebanon. Soon after, a group of Lebanese residents went on a witch-hunt.

While the French wanted the country to remain a compact territory with a Christian-dominated majority in an ocean of Arab Muslims, Lebanese Christians and more specifically the Maronite-majority amongst them, saw an opportunity to set up the “national homeland” they had dreamed of with expanded territory, autonomy and independence, and pressed the French while making the best use of favorable circumstances at the time until they achieved their goal.

The moment of creation and what accompanied it as political narrative, inherently created a schism in the newly found country, which Middle East historian Meir Zamir touches upon in his book, “The Formation of Modern Lebanon,” that examined the critical period in the history of Lebanon from when the modern state was created in 1920.

Particularly perceptive are two remarks Zamir points to in his book, the first stipulating that: “[T]he strong ties of the Christians, particularly the Maronites, with Europe led the Muslims to identify them with the European powers and to regard them as traitors … The Christians … often behaved in a superior and provocative manner, further increasing Muslim hostility …’.

Syrian refugee kids are seen in a refugee camp after their tent camp was set on fire in clashes between a group of Lebanese and Syrian refugees in Tripoli, Lebanon on January 03, 2021. Photo by Mahmut Geldi, Anadolu Images

While the second claims that “[B]etween 1918 and 1920 the Christian demand for an independent state in Lebanon appeared to the Muslims of Syria as a more immediate and serious threat than the corresponding Zionist demand in Palestine.”

Prominent Lebanese historian, the late Kamal Salibi, wisely attributed that to the fact that, “the Muslims of Syria in 1920 identified Zionism as an external danger, but they diagnosed the call for Christian Lebanese separatism, in collusion with Western power, as treason and subversion from within. Their diagnosis of the Christian position may have been uncharitable, but so was the dominant Christian Lebanese attitude towards the aspirations of the Muslims of Syria at the time.”

As such, while Maronites had a choice between a smaller Lebanon or a confederation of autonomous Syrian cantons—sectarian ones, they opted for a “Greater Lebanon,” hoping to create and mold a larger country on the Mediterranean, in their own image.

With that, the question of “who is Lebanese” emerged and the answer to it was: the “non-Syrian,” and the answer to “who is Syrian” question became: the “non-Lebanese,” Lebanese writer Wissam Saade concludes, sowing the seeds for Lebanese racism towards Syrians, in specific, and towards any component that challenged the Christian-dominated “concept of Lebanon,” in general.

The “othering” process, which preexisted even before Lebanon’s insurrection, was institutionalized at that moment. It drags on till today despite the different context.

Following the moment of creation, the Maronite practice in ruling the country further exacerbated tension between Muslims and Christians and eventually led to the “sectarianizing” of the social setting it on a track of collision. According to Salibi, “[W]hat the Muslims had opposed from 1920 until 1975 was not necessarily the concept of Greater Lebanon.

Seven decades passed, between 1920 and 1975, without Lebanese Christians paying much attention to the changes that were taking place, first among their Lebanese Muslim compatriots, and then the larger region. Following the disastrous Arab-Israeli war of 1967, dubbed an-Naksah, the setback, and the incidents of Black September of 1970 in Jordan, the Muslim-dominated Palestinian refugee influx to Lebanon became a source of paranoia to the Christian leadership.

For them, the Palestinian refugeehood was perceived to be a factor of demographic change, hence, an outright contestation of the fragile “concept of Lebanon” referred to above. The paranoia and fear were ultimately and directly translated into racism leading down the slippery slope of confrontation which resulted in a 15-year civil war.

The Lebanese Civil War (1975-1990) created a new set of grievances and animosities, among the different Lebanese constituencies and between Lebanese and Syrians as well. The Syrian army’s direct military intervention in the Lebanese war, which in the long run resulted in tilting the balance towards the Muslims against the Christians, dealt again a huge blow to the “concept of Lebanon” as per the Maronites. The war was concluded in 1990 with the signing of the Ta’if Agreement, which reshuffled the system, diffused power from the hands of the Maronites, made it more inclusionary, and gave Syria a “guardianship” status over Lebanon.

The Syrian regime’s guardianship lasted for 15 years (until 2005) with authoritarian practices that only sought to humiliate Lebanese in general and specifically Maronites, who saw their two main leaders either imprisoned or exiled. Lebanese racism mutated in that case and became coupled with feelings of oppression, an exercise the Syrian regime’s troops and lieutenants exercised every day to remind the Lebanese who ruled their country.

On the flip side, all this was internalized by Lebanese and projected later on even towards regular Syrian citizens that constituted an essential labor force in the country. Such blanket approach racism dismissed nuances, as in separating between the oppressor—the Syrian authoritarian regime—and the oppressed (both Syrians and Lebanese citizens).

The breakout of the Syrian revolution in 2011 and the regime’s conscious decision to violently suppress it, resulted again in a Muslim Sunni-dominated Syrian refugee influx to Lebanon. The country received around 1.5 million Syrian refugees as per the United Nations High Commissioner for Refugees, meaning around 36% of its population. Despite the different current-day political dynamics, the most dominant Christian-Maronite political party, at the time, the Free Patriotic Movement (FPM) found it befitting to capitalize on previously mentioned historical grievances and paranoia, to solidify its grip on the Christian constituency in the country and advance its own political goals.

VIDEO: Racism and hate against Syrian refugees in Lebanon

Ironically, the same party was a staunch ally of Syrian President Bashar Assad and defended him throughout the war despite the war crimes and crimes against humanity he committed, while ramping up the racist political rhetoric against Syrian refugees in Lebanon. Additionally, Hezbollah who is not only allied to the FPM and the Syrian regime but who became an active member of the Syrian Civil War through direct military intervention, often instrumentalized the Syrian refugeehood in Lebanon depending on its interests. The sectarian militia played a dichotomy at times painting the refugees as radicals and at times portraying itself the tolerant and hospitable host, when in reality Hezbollah participated in the forced displacement of Syrian citizens from their own villages at the Syrian-Lebanese border, contributing to the Syrian refugee plight.

On the flip side, Lebanese political parties opposed to the Syrian regime played a major role in hosting Syrian refugees and defending them as an extended part of the open political confrontation with the regime and its allies in Lebanon. Hence why, the Bekaa governorate, North Lebanon and Beirut host around 88% of the Syrian refugee presence in the country.

However, no one in Lebanon expected the Syrian war to be as prolonged nor did they expect the current fait accompli of “indefinite” refugee presence in the country. While the Syrian refugee presence became a source of income for the Lebanese state, creating a whole new job market due to foreign funding addressing the Syrian refugeehood in Lebanon, the downward spiraling social and economic situation in the country as a result of the failure of the “sectarian system” has started to backfire on Syrian refugees increasing tension between them and the Lebanese.

With Lebanon entering a long and dark tunnel due to the unprecedented political and economic crisis it faces, a crisis generated by its sectarian ruling elite, discrimination—whether between the Lebanese themselves or towards Syrian refugees—will only be exacerbated and probably “weaponized” at some point. However, the nationwide transcendent uprise of October 17, 2019, offered a gleaming light in all that darkness that overwhelms the country now, by creating a fierce and youth-oriented public opinion that clearly dissects hollow political narratives often utilized by sectarian ruling parties and accurately assigns blame to the different predicaments the country faces.

Rebelling Lebanese youth today are not sold on “identity-related” xenophobic political rhetoric anymore and the globalized citizenship they represent constantly pushes them to stand for international human rights principles including refugee-related ones, often shattering stereotypes about “Lebanese racism” in general. Today, while the Lebanese sectarian system is discriminatory par excellence, whether between the Lebanese themselves or against the “other,” it is an inaccurate assertion to say Lebanese are racist.

Read: The Beirut Port Explosion: the Chernobyl of the Lebanese Sectarian System?

Also Read
What Does Sectarianism Mean for Lebanese Society?