The Amazighs who make 30 million people in North Africa still fight for their rights on their lands. 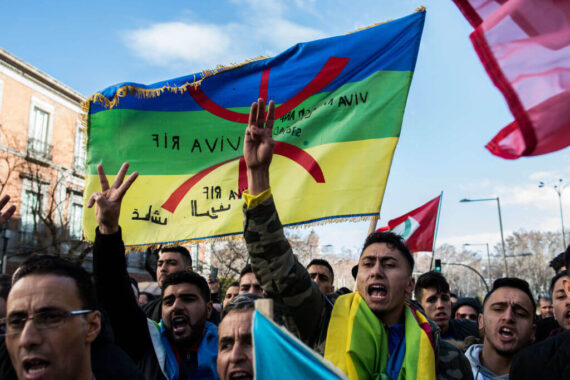 People protesting calling for the release of political prisoners in the Rif region of Morocco, during a demonstration where hundreds of people from all over Spain have gathered to protest in the capital. Photo by Marcos del Mazo, LightRocket via Getty Images

The Amazighs, usually referred to as Berbers, are native inhabitants of North Africa. Their presence stretches from the Canary Islands of Spain to Morocco, Mauritania, Mali, Niger, Algeria, Tunisia, Libya, and Egypt. Today, they also make up a considerable percentage of immigrants in many countries outside North Africa.

The Amazighs trace their origins to the Libyan tribes that formed strong political entities such as the Garamantes the Gaetulians, and the Meshwesh. The Meshwesh, in fact, annexed Egypt and even installed Shoshenq I as a pharaoh. His lineage carried on for centuries through the 22nd and 23rd Egyptian dynasties (945–720 BC). Apart from this, the Amazighs’ cultural influence on ancient civilizations was extensive as detailed in Greek and Egyptian mythology.

Throughout time, two great powers emerged in the territories where the Amazigh lived: the Phoenicians and the Romans. The Amazighs’ relationships with these two powerful states changed drastically ranging between war, alliances, and cooperation. Yet, throughout the various kingdoms they established, the Amazighs – mainly the Massylii and the Masaesyli – maintained an independent and free will.

Due to migration and the unfolding of political events, many Amazighs forgot their language and became Arabized Amazighs. Amazighs speak Darja, the local North African dialect as their primary and mother tongue. North African Darja is highly influenced by the Amazigh language, which is very difficult to understand for native Arabs of the Middle East.

Starting from the colonial era in North Africa, the Amazighs like their African neighbors, lost territory and power to the Europeans, mainly to Spain, Portugal, France, and Britain.

Starting from the colonial era in North Africa, the Amazighs like their African neighbors, lost territory and power to the Europeans, mainly to Spain, Portugal, France, and Britain. They had to fight long and bloody wars of independence to gain their freedom from colonial powers that created new territorial changes, including the creation of modern Algeria, Morocco, Mauritania, Mali, Niger, Tunisia, and Libya.

VIDEO: Who are the Amazigh of North Africa?

The Amazighs in post-independent North Africa

Amazighs had to struggle with the newly installed governments in North Africa mainly over linguistic and social issues. For example, in many North African countries, giving Berber names to children was banned. In Gaddafi’s Libya, the regime banned the teaching of Amazigh languages. As a result, many Amazighs joined the Libyan opposition in the 2011 civil war that deposed Gaddafi. Since then, the Amazighs in Libya enjoy more freedom in practicing, teaching, and performing their cultural rights.

In Morocco, the establishment of the Royal Institute of Amazigh Culture in 2002 opened the door for the recognition of the Amazigh language Tamazight as the country’s second official language after Arabic.

In May 2002, Tamazight was included as an official language in the Algerian constitution of 2001 following demonstrations known as “Black Spring” organized by Algerian Amazighs.

Both Mali and Niger recognize Tamashaq, the Amazigh language of the Tuareg people, as a national language, and it is studied and used in mass media. In May 2002, Tamazight was included as an official language in the Algerian constitution of 2001 following demonstrations known as “Black Spring” organized by Algerian Amazighs.

Today, in Algeria, Tamazight, along with French and Arabic, is one of the three main languages used in media. In 1996, Tamazight began to be taught as an optional subject in regions where it is spoken. On December 27, 2017, Algeria’s former president Abdelaziz Bouteflika recognized Yennayer, the first month of the Amazigh year, as a public holiday to be celebrated on its first day (January 12) every year.

Amazighs are gaining greater political presence in Algeria and Morocco. Many Amazigh figures reached high positions in the social and political hierarchies. Examples include the former president of Algeria, Liamine Zéroual, and its current president Abdelmadjid Tebboune, and the current prime minister of Morocco, Saadeddine Othmani.

In 2019, the Amazighs contributed greatly to the Algerian protests, also known as the Hirak Movement, which resulted in the deposal of the regime of President Bouteflika.

In Algeria today, political parties and popular movements are pushing for granting the Amazighs more rights such as including the Amazigh language as a mandatory language in schools and promoting the restoration of the Amazigh cultural heritage sites. The last two decades have seen an improvement in the political, cultural, and social status of the Amazighs in North Africa, but the road ahead to a full recognition of their rights in still long.

The unification of the Amazigh language and education

To this day, there’s no unified Amazigh language – at least, this is the case in Algeria, where each region claims the use of its local language as the de facto learning language. Academics concerned about the issue are divided between three examples and groups.

The example of the German language where all Amazigh languages become one. The Italian example where one Amazigh language is taught in all regions, and thus the other languages fade away and in time merge with the new de facto official language. And the federal example, where each region keeps its local language.

The main issue, however, in introducing the Berber language to the school system is the alphabet as there are three suggested systems to write Berber texts. The first is Tifinagh, the Amazigh alphabet system, which is still widely used in the Tuareg region. This very old alphabet is found throughout North Africa’s old inscriptions and ruins.

Today, it has been developed and made official by local authorities. It is widely used at facilities such as schools, post offices, and banks, yet some scholars argue that it is not practical and that is hard for new learners, who, instead of learning a new language, have to go through learning a new system instead.

The second suggested writing system is the Latin alphabet which is used mainly in the Kabylie region, east of Algiers. Mouloud Mammeri (1917-1989), an Algerian scholar, linguist, anthropologist and writer, worked extensively on the Latin system and adapted its letters for a practical writing system of the Amazigh language. This approach is widely used in modern publications at higher education institutes and, mainly, at universities.

The third proposition is the use of Arabic. This proposal is backed by the long history of the Amazigh people with the Arabic language. The Arabic alphabet was used under Amazigh Muslim kingdoms, especially in religious scripts, and Amazigh groups whose second native tongue is Arabic, like the Ibadi people in Algeria, Tunisia, and Libya, support this suggestion.

In spite of the recent positive developments, certain Amazighs seek independence or at least some type of self-governance in the form of a federal system. An example is the Movement for the Self-determination of Kabylie (MAK) which was formed in 2001. Kabylie is a region in the east of Algiers which contains the largest Berber-speaking community in North Africa. In Kabylie, opinions differ as to whether it is more beneficial to stay as one united country or if becoming independent will open the doors to more prosperity on both the individual and state level.

Recent years have seen an increasing involvement of Amazighs in North African politics. Despite improvements, the Amazighs are still fighting for their cultural rights. For a more stable North Africa, governments should recognize the political, cultural, and social rights of the Amazighs who have been living in the region for thousands of years. 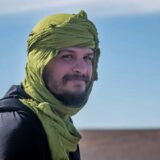 Abderrahmane Gaouda is an Amazigh writer, publisher, researcher & translator. He holds an MA degree in Translation from the University of Batna. He is the author of three books and is a speaker who presented at many conferences on academic & non-academic occasions mainly about Amaizgh's history & culture.