The Hirak Movement in Algeria Continues to Demand Change

The Hirak in Algeria is not exclusive to the protests in the streets; every article, every meme, every tweet against the injustice of the system is part of the Hirak, and no system can ever keep all tongues tied. 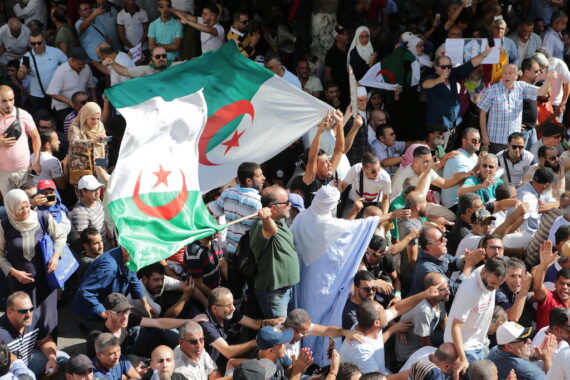 Security officers intervene in protesters as Algerians stage a protest against new oil and gas bill in front of the parliamentary building in Algiers, Algeria on October 13, 2019. Photo by Farouk Batiche, Anadolu Images

“It is hard enough to start a revolution, even harder to sustain it, and hardest of all to win it.”

Larbi Ben Mhidi, FLN Founding Member as portrayed in The Battle of Algiers (1966)

In February 2019, the bid for a fifth term was announced on behalf of Algeria’s former president Abdelaziz Bouteflika who was debilitated after suffering a stroke in 2013. Frustrated and exasperated, the Algerian people flooded the streets in protests demanding the withdrawal of Bouteflika’s candidacy.

Far away from home, I watched the weekly Hirak (activism) as it grew from protests to a full-fledged revolution. Millions of Algerians gathered for a peaceful and creative protest to say “enough.” I could not help but compare it to the 2014 protests against Bouteflika’s fourth mandate which were smaller and weaker for one reason: fear of chaos and violence.

Clearly, the Revolution of Smiles (Thawrat Al Ibtisama) was the result of an anger that accumulated over several years, the president’s absence had become too embarrassing to be tolerated. The Hirak movement succeeded in ousting Abdelaziz Bouteflika, but is yet to succeed in toppling the entire military regime, which has been governing the country since its independence in 1962.

President Abdelmajid Tebboune was elected in the December 12, 2019 elections amidst a very low turnout of around 39.8%. The controversy continued after the election as people openly contested having another president brought in by the military.

Due to the outbreak of the COVID-19 pandemic, the protests had to be suspended; however, the movement’s activism continued online on social media. Although there have been a few protests during the summer of 2020, they remain small in number compared to the massive protests of the Hirak. The Revolution of Smiles is not over yet.

One of the Hirak’s most famous slogans was “You thieves, you ate the country,” as the people lamented the large amounts of money claimed to be stolen by government officials while the nation sank into dire poverty. During his campaign, President Tebboune repeatedly promised Algerians that he has a plan to recover some of the money stolen by the previous government. 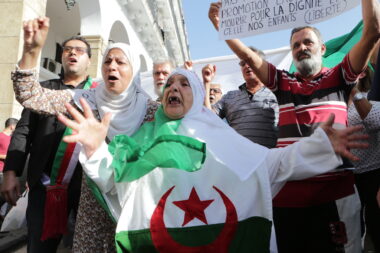 Algerians stage a protest against new oil and gas bill in front of the parliamentary building in Algiers, Algeria on October 13, 2019. Photo by Anadolu Images

The president refused to reveal his plan to the media and even openly admitted that he would not divulge it in case he loses the election. A year after his inauguration, the Algerian nation has not heard anything about the plan yet. Even worse, the president himself disappeared after allegedly contracting the COVID-19 virus. The question, therefore, changed from “Where is the money?” to “Where is the president?”

The president spoke to the Algerian people from a German hospital on December 13, 2020. His sickly appearance and obvious weight loss only fanned the flames of concern regarding who is running the country during the president’s absence. Reminiscent of Bouteflika’s era, the concern about having the state institutions paralyzed once again is on a constant rise. These concerns were not calmed by the president’s return to Algeria on December 29, 2020.

One of the main reasons why the Hirak movement managed effectively and peacefully to make change in Algeria was the fact that it does not have any leaders or representatives. It is a national movement of people from different ideologies who all agree that Algeria deserves a better government. The absence of leaders simply means that the corrupt government cannot arrest or blackmail an entire nation.

However, the COVID-19 pandemic has affected the Hirak movement deeply. After national consensus that the weekly protests pose a risk to public health, the Hirak hiatus gave the government more room for attacking symbols of the Hirak.

On March 7, 2020, journalist Khaled Drareni was arrested. Drareni worked as an editor at the Casbah Tribune while also corresponding with French-language channel TV5 Monde. The journalist was charged of “inciting an unarmed gathering” and “endangering national unity” due to his coverage of the anti-government Hirak protests.

President Tebboune appeared in an interview calling Drareni a “khabardji” (snitch). The president explained that after being interrogated by the police, Drareni immediately went to the French embassy to report it. The government undoubtedly used this information to minimize the support that Drareni would get from the Algerian people who still have a lot of reservations on the intentions of France vis-à-vis Algeria. 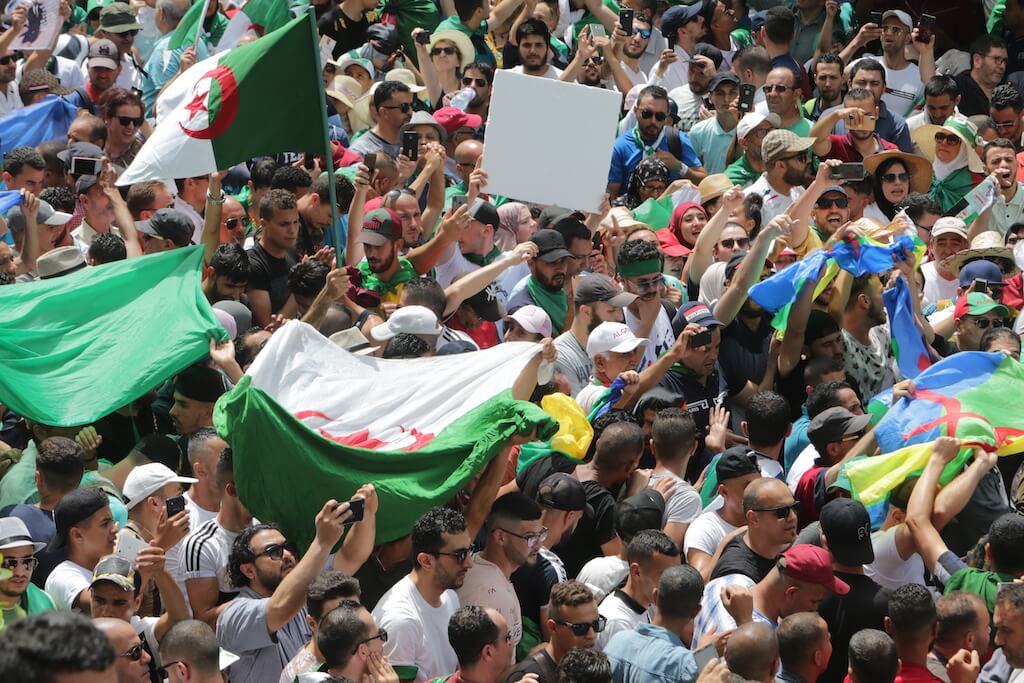 Another example of the state-led persecution is the arrest of the 25-year-old Algerian social media content creator Walid Kechida whose satirical memes seemed to upset the government.   Kechida was charged with “insulting the president of the republic.” Contrary to the case of Drareni, Kechida’s trial clarified the true intentions of this witch hunt: to tie all tongues of dissent. The witch hunt eventually left no room of negotiations between the movement and the government.

Back to Square One

On December 11, 2020, the former defence minister General Khaled Nezzar returned to Algeria on a private jet after spending months between Spain and France. This was a major disappointment for the people who were anticipating the return of President Tebboune from Germany. The general had been convicted of plotting against the army leadership and posing a threat to state institutions.

After over nine months of Hirak protestors shouting “Throw the army generals in the bin, and Algeria will get its independence,” this turn of events is kindling a national suspicion regarding what is happening backstage at El-Mouradia.

Most importantly, Nezzar is a contested figure in Algeria because he remains a symbol of the state violence committed against civilians during the Black Decade. This return during the president’s absence has sparked a heated debate on whether the former minister has secured an agreement with the government in order to be exonerated, which would undoubtedly ignite a massive wave of anger from the people.

Read: Can the Muslim Brotherhood in Algeria Be a Transformative Power?

The symbolic value of this return, which coincides with General Toufik leaving prison for convalescence, is also raising a lot of questions about a fight for power between different army generals. After over nine months of Hirak protestors shouting “Throw the army generals in the bin, and Algeria will get its independence,” this turn of events is kindling a national suspicion regarding what is happening backstage at El-Mouradia.

On January 2, 2021, the military court acquitted four top officials whose imprisonment seemed like a temporary success of the Hirak. Said Bouteflika, the younger brother of ousted president Bouteflika, two former security chiefs Mohamed Mediene and Athmane Tartag, and the leader of the Workers’ Party Louisa Hanoune were convicted for plotting against the army and the state. All were acquitted while Bouteflika remains in custody to face other charges of corruption.

Will the Revolution of Smiles Continue in Algeria?

The same question that once urged millions to flood the streets of Algeria still awaits an answer: who is running the country? The temporary sedative of prosecuting a few corrupt government officials is fading away and it is becoming ever clearer that the demands of the Hirak are still the same. The slogan “Ytnahaw ga’” (Off with them all) targets, primarily, the military system. Instead, the Algerian people are surprised to see them all return.

The policies of President Tebboune’s government have not succeeded in giving answers to “their excellency, the people,” but have only engendered new questions regarding how profoundly difficult it is to get rid of the “gang” running Africa’s biggest country. Algerians turned dissent into a form of art: they patiently calculate every movement and adapt their demands according to the republic’s best interest.

It is, therefore, very unlikely that they will accept a change in the civil façade of the junta in power. It is important to emphasize that the Hirak in Algeria is not exclusive to the protests in the streets; every article, every meme, every tweet against the injustice of this system is part of the Hirak, and no system can ever keep all tongues tied. The Revolution of Smiles continues, until they all leave. As disheartening as the recent events have been for the nation, they serve as a reminder that there is only one hero: the people. 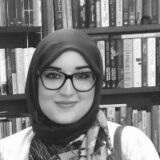