Crimea Platform assembled representatives of 45 countries and international organizations leading many analysists and experts to name it as “the most notable international event ever hosted in Ukraine.” 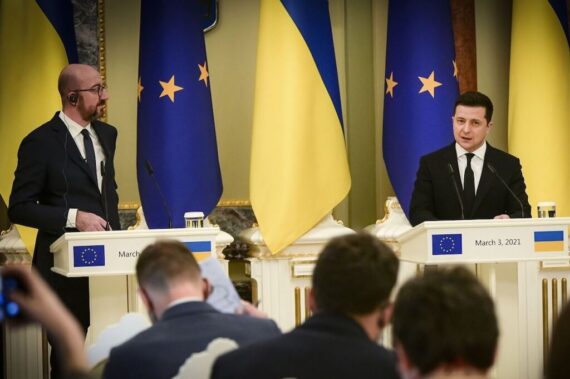 Ukrainian President Volodymyr Zelensky (R) and European Council President Charles Michel (L) give a joint news conference following talks on Crimean Platform summit and calling on the European Union to impose sanctions on those who violate human rights in Crimea, in Kiev, Ukraine on March 03, 2021. Photo by Ukrainian Presidency via Anadolu Agency.

On August 23, 2021, Kyiv hosted the first convention of the International Crimea Platform, which has been presented as a “consultative and coordination format with the aim of peacefully ending the Russian Federation’s temporary occupation of the Autonomous Republic of Crimea and the city of Sevastopol and to restore control of Ukraine over this territory in full accordance with international law.”

The event assembled representatives of 45 countries and international organizations leading many analysists and experts to name it as “the most notable international event ever hosted in Ukraine.”

Speaking about its history and background, it needs to be pointed out that the idea of carrying out such an event is all but new. At this juncture, part of the credit should go to Ukraine’s former president Petro Poroshenko (2014-2019), whose presidency coincided with, perhaps, the most gruesome period of Ukraine`s post-1991 history.

Poroshenko had expressed the idea in 2016, standing behind the creation of the unsuccessful (for a variety of reasons) Geneva+ format. Subsequently, Volodymyr Zelensky returned to the idea, seeking to make it one of the focal points of his personal meeting with Russia’s president Vladimir Putin in 2019.

Yet, Russia refrained from any dialogue on the subject, firmly stating that Russia’s “sovereignty” over Crimea is undeniable and will not be a matter of discussion. There is a very little doubt that Ukraine`s president seriously counted on a different response from Moscow, but nevertheless, Zelensky was not put off by this unsuccess and pursued the issues.

Russia refrained from any dialogue on Crimea, firmly stating that Russia’s “sovereignty” over Crimea is undeniable and will not be a matter of discussion.

In effect, given the lack of any serious domestic successes, he would make it one of his prime (foreign) policy goals. In September 2020, in his address to the United Nations General Assembly, Zelensky announced a plan to move on with a “Crimea Platform,” making it an instrument “for the coordination of international efforts aimed at securing Crimea’s return to Ukraine.”

Before addressing some event-related specificities and implications, it is important to outline the platform’s key goals and its structural framework briefly. With regard to the former, the main goals were explicitly voiced by the head of Ukraine`s diplomacy Dmytro Kuleba in five main points that include the following:

– Strengthening international efforts for the non-recognition of Crimea’s current status.

– Confronting violations of human rights in Crimea – see the suppression of Tatars and other minorities.

– Ensuring the freedom of naval transportation.

– Overcoming the economic and ecological consequences of Russia’s occupation of the peninsula.

It has also been stressed that the platform is not a single event but has been conceived as a complex, multidimensional, and decentralized framework with an extremely broad ambit of activities. As stated by Zelensky, “[T]he Crimea Platform will not only exist in Kyiv. Only the headquarters will be located there, whereas various tasks and dimensions associated with the Platform will be acting in different countries.” The platform will be comprised of four macro levels, each having its own smaller goals and aimed at attracting different target audiences. These four levels are:

– Level 1: The assembly of leaders of foreign nations.

– Level 2: The assembly of heads of diplomatic services and ministers of defense.

– Level 3: The assembly of members of parliament.

– Level 4: The assembly of top academics and policymakers. (Expert Level)

This said, the actual implementation of this highly ambitious and by all means necessary initiative, could be slowed down (and potentially even jeopardized) by a variety of interrelated factors. The following three aspects need to be stressed.

First, despite rhetoric and some actions, the international community seems to be reluctant to deepen the rift with Russia over its behavior towards Ukraine, including, among others, the violation of its territorial integrity. Aside from other evidence, such as the Nord Stream 2, this became quite clear based on the level of participants that arrived at Kyiv for the platform kickoff forum. Even though the event convened dozens of high-status participants representing, among others, 30 NATO countries, there were challenges on the surface.

To start off, German outgoing chancellor Angela Merkel, who had been decorated with the Order of Liberty, one of the Ukraine`s main state honors, left Kyiv prior to the event’s official launch. Then, apparently breaching international protocol, President of the European Commission Ursula von der Leyen declined the invitation under the pretext of tightness of schedule, causing huge dissatisfaction in Kyiv.

Despite the “strategic nature” of its partnership with Kyiv and Kyiv’s explicit support during the recent conflict over Karabakh, Azerbaijan also refrained from participation. Similarly, Turkey was represented by Foreign Minister Mevlüt Çavuşoğlu, while the Ukrainian authorities had hoped for President Recep Tayyip Erdoğan’s participation. On its side, China chose not to participate at all, allegedly ignoring the invitation.

Finally, the much-hoped-for appearance of the U.S. delegation also failed to meet expectations: instead of Joe Biden, the U.S. was represented by Jennifer Granholm, United States secretary of energy. For obvious reasons, neither Russia nor representatives of Crimea took part in the event. Quite predictably, Russian officials condemned the forum as an incarnation of Russophobia and a tool created to generate anti-Russian sentiments in Europe.

Second, while it would not be an understatement to argue that the platform has had some important informational meaning – as noted by Kuleba, the forum signified Ukraine’s ability to draw international attention to the issue of Crimea, returning it back from “oblivion” – it is not at all evident that the platform will ever be able to overcome awareness-raising status and achieve practical results by attaining the declared goals.

The forum also did not bring about any new developments: the international community, at least the largest part of it, did not recognize Russia’s annexation of Crimea even before the platform was launched; international sanctions on Russia have not been lifted; and no new solutions to the “Crimean problem” were voiced during the event.

The third issue is that of utility and reaping (potential) benefits. Despite the fact that some Ukrainian experts have contended that the platform could have the prospect of becoming the “most effective leverage against Russia” with a potential of going well beyond the de-occupation of Crimea and spreading to “Transnistria, Abkhazia, South Ossetia, and any other hybrid problem,” both the probability of this scenario and its value to Ukraine are rather dubious.

Even if the value is attained, and the status and international recognition of the platform go beyond what was observed at the end of August in Kyiv, there is serious doubt whether this development would be of major value to Ukraine. While it seems very dubious that Crimea is to return to Ukraine any time soon (or ever) given Russia`s military buildup and determination to strengthen its sway over Crimea, the best-case scenario is that the platform could transform into a major irritant for Russia.

This said, if this scenario indeed materializes, the Crimea Platform most likely will be used by more powerful parties/countries for their own purposes as a tool to apply pressure on Russia, if and when necessary. This will leave Ukraine as a bystander, at best, and, at worst, as a loser.