If Jordan’s political, economic, and social conditions were in a better state, there would be minimal chances of such an internal rift or foreign involvement. 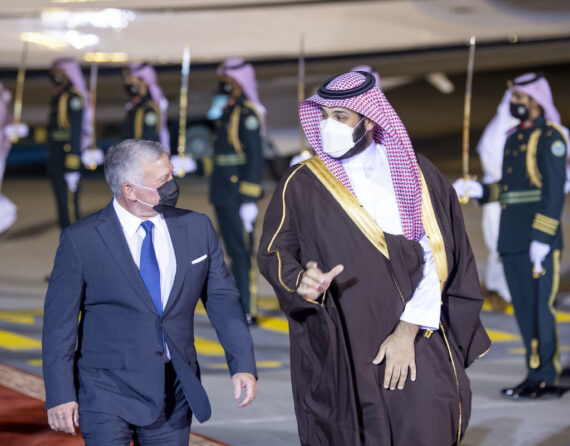 For a long time, Jordan has been considered an island of stability in one of the world’s most volatile regions. Surrounded by chaos and failed states, it has turned into a haven for those running away from death and destruction. Despite its minimal resources, it became a destination for Palestinians, Iraqis, Syrians, and even Lebanese.

Just a few days before celebrating its first centenary, Jordan witnessed an unprecedented political crisis, at least on the royal family level. The typical picture of a stable Jordan was briefly shaken when the authorities arrested around 20 people and sought to restrain Prince Hamzah bin Hussein’s movement, the former crown prince and the half brother of King Abdullah bin al-Hussein, for being involved in a plot targeting Jordan’s stability and security.

This serious development came amidst a growing list of internal social and economic challenges exacerbated by the COVID-19 pandemic. Amid the financial hardship the country is facing, the rise of corruption, the skyrocketing of unemployment rates, and the long-lasting delay of serious political and economic reforms, the authorities seem sensitive, the critics seem encouraged, the people seem nervous, and the country seems more vulnerable than ever.

Among those arrested, the government was quick to single out two names. The first was Sharif Hassan bin Zaid, the king’s former envoy to Saudi Arabia and the brother of Captain Ali bin Zaid, a senior Jordanian intelligence officer who was killed at the end of 2009 in a suicide attack by an al-Qaeda double agent in Afghanistan. Sharif Hassan bin Zaid holds a Saudi passport in addition to his Jordanian nationality and resides in Saudi Arabia.

The second and the most prominent figure to be arrested was Bassem Awadallah, who was once a close confidant of the king of Jordan and a former chief of the Royal Hashemite Court who occupied several ministerial positions. Awadallah heads a UAE-based company and works as a consultant for Saudi Crown Prince Mohammad bin Salman (MBS). He is also known for his close ties to the Israelis.

The Washington Post was the first major media outlet to report the issue in detail. The newspaper quoted Jordanian officials describing the incident as a “complex and far-reaching plot that included at least one other Jordanian royal as well as tribal leaders and members of the country’s political and security establishment.” It added, “One official cited unspecified evidence of ‘foreign’ backing for the plan.”

VIDEO: Which countries may have been involved in an alleged plot against Jordan?

Supporters of Prince Hamzah and his sympathizers firmly believe that the authorities’ claim of foreign involvement and a collusion between Prince Hamzah and Bassem Awadallah, who is known to be opportunistic and corrupt, is bogus and fabricated.

They argue that by doing this, the authorities aim to stir confusion, distract the people, and smear the reputation of the prince. Accordingly, pundits representing this camp swiftly excluded a scenario in which foreign actors might be involved or in which Prince Hamzah might have colluded with Awadallah, calling it “nonsense.” While the supporters of Prince Hamzah have no concrete evidence or proof of their argument, their rhetoric is mainly based on the following three assumptions.

First, Prince Hamzah is a nationalist who derives his support from East Bank Jordanians, a population not only incompatible with those who may support Awadallah (of Palestinian origins) but who also have no interest in a plot supported by foreign aid.

Second, Israelis have strong intelligence ties with their Jordanian counterparts and therefore, it would be counterintuitive to get involved in a plot of this kind against King Abdullah.

Read: Peace to Prosperity or Peace for Jared Kushner?

Third, Saudi Arabia and the UAE have no interest in getting involved in a plot to destabilize the Jordanian monarchy, let alone a scheme to install the king’s half brother in power, given that it doesn’t serve the monarchs to undermine each other’s legitimacy. Additionally, according to this point of view, King Salman of Saudi Arabia has chosen his son Mohammad as his heir and it does not serve MBS’s interests to suggest that a king shouldn’t select his successor.

While it is always healthy whenever there is something suspicious to question the authorities’ story, it is certainly unwise to dismiss the different scenarios swiftly, primarily if they are based on facts. In this sense, it is equally important to question the motives and the narrative of those strongly dismissing possible foreign involvement given their obvious self-interest in promoting a scenario that favors Prince Hamzah while intentionally overlooking the counterargument.

The official narrative was consistent in two things. First, it never spoke about a military coup but rather of a plot to “undermine the security and stability” of Jordan. Second, it stressed that the “prince’s actions and movements are being utilized by others,” meaning that while he might not intentionally want to be a part of any plot, he is being used.

Some Jordanians are already questioning Prince Hamzah’s motives based on two things: first, his apparent lust for power which has surfaced in leaked recordings. Second, he has refrained from providing insights, solutions, or even alternative approaches to the political and economic problems that he has recently been criticizing while enjoying all the privileges of being a member of the royal family.

Last Saturday, leaked information presented the prince as having a more significant role in the alleged plot than what was previously thought. A journalist known to be close to the government and who heads the board of the television channel The Kingdom, revealed that Prince Hamzah wanted to assume the leadership of the Jordanian Armed Forces and oversee the security apparatus in return for ending his criticism of the authorities.

Several more qualified princes and crown princes were dismissed or demoted from their positions without creating such a ruckus, including the famous and capable former Crown Prince El-Hassan bin Talal, brother of late King Hussein and uncle of Hamzah.

From the perspective of those who would like to consider a possible foreign involvement in the latest turmoil, one main argument is that if the “foreign factor” is fabricated, why would the Jordanian authorities arrest senior figures known to be very close to the Saudi and Emirati authorities? Why would the Jordanian authorities risk seriously jeopardizing their country’s relations with Riyadh and Abu Dhabi if the whole issue is staged and has no concrete grounds?

Given that there is no lack or shortage of corrupt figures to be used in a staged operation, there is no sensible reason to force the government to do what it did unless there is evidence against those who were arrested.

The fact that Basem Awadallah previously worked as chief of the Royal Hashemite Court means that he has access to sensitive and critical details about the internal situation in Jordan, including which tribes, groups, and figures to contact, utilize, build relations with, pay, etc. In other words, this makes him the Saudi-based version of the infamous UAE-based Mohammad Dahlan.

Moreover, claiming that MBS and Abu Dhabi’s Crown Prince Mohammed bin Zayed (MBZ) have no interest in plotting against another monarchy doesn’t add up when we take into consideration the fact that they have shown irrational and irresponsible behavior in the past – until last January, they plotted against Qatar and worked restlessly to overthrow its emir.

During Trump’s era, Saudi Arabia, the UAE, Israel, and Jared Kushner put maximum pressure on Jordan and its king to accept the so-called Deal of the Century. Despite the U.S. pressure, King Abdullah refused to bow and thus was seen as a primary obstacle to their grand scheme.

Back in 2017, the aforementioned countries warned King Abdullah of their dissatisfaction with his signs of resistance. At the end of that year, MBS detained Sabih al-Masri, one of the most prominent Jordanian billionaires (of Palestinian roots), chairman of the Arab Bank, and a key player in the Jordanian economy. It is believed that detaining al-Masri was part of a plan to coerce King Abdullah.

At the time, several reports claimed that King Abdullah was summoned to Riyadh and warned not to attend a Muslim summit called by Turkish President Erdoğan to rally the Islamic world against Trump’s decision to recognize Jerusalem as Israel’s capital. King Abdullah turned a deaf ear to these threats and flew directly from Riyadh to Istanbul.

Not only did he attend the summit, but he also stood by Erdoğan’s side in the front row for the photo session. Later, he openly stated that Jordan and himself were under foreign pressure to accept the “Deal of the Century.”

In 2019, Jordan declined to list the Muslim Brotherhood as a terrorist organization despite repeated calls by the Saudi and Emirati authorities to do so. The UAE-Israeli normalization accords at the end of 2020 further undermined the status and role of Jordan. These accords allowed Israel to bypass Amman on the Palestinian issue, the Jerusalem (al-Quds) issue, the peace process, and to disregard its objections and protests.

The relation between Jordan and Israel significantly deteriorated after the Abraham Accords. The Hashimite Kingdom stopped renewing a 25-year-old agreement that granted Israel private land use in Jordan’s al Baqura and Ghamr.

Netanyahu escalated the spat with King Abdullah when he rejected his own security services’ recommendations to increase the water supplies to Jordan. According to Israeli officials, Netanyahu is deliberately endangering the peace accords’ stability because of the personal hostility between him and King Abdullah.

Amman responded by blocking Netanyahu’s planned flight route to the United Arab Emirates from entering its airspace, forcing the Israeli prime minister to cancel his trip. The fact that Netanyahu was explicitly going to meet Abu Dhabi’s MBZ and possibly the Saudi crown prince means means that Amman was sending a message of its resolve beyond Israel to whomever it may concern.

During the current plot crisis, the Jordanian authorities leaked the name of former Mossad officer Roy Shaposhnik, uncovering that he offered to send a private jet to take Prince Hamzah’s wife and children to Europe. Shaposhnik acknowledged contact with Hamzah’s family, but denied being a spy or former Mossad officer. However, it is a known fact that he served as an adviser to former Israeli prime minister Ehud Olmert and that later he worked for Erik Prince’s infamous private military company Blackwater, currently known as “Academi”. The latter happens to have strong ties with UAE’s MBZ!

All in all, there is no lack of appetite on the side of foreign players to interfere in Jordan’s internal affairs. They don’t necessarily need to plot a coup – it is enough to undermine further Jordan’s stability in order to force it to submit to their will. An ambitious prince who would cause a split in the royal family and the population would undoubtedly serve their goals. Having said this, if Jordan’s political, economic, and social conditions were in a better state, there would be minimal chances of such an internal rift or foreign involvement.