The Canal Istanbul will allow Ankara to regulate the maritime traffic passing through the new waterway at its own discretion, and to charge a fee for the passage. 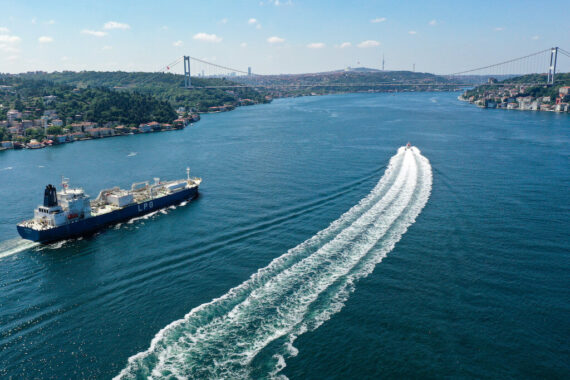 A drone photo shows a boat belonging to Directorate General of Coastal Safety patrol 24/7 at Istanbul Bosphorus to minimize loss of life and any possible incident in Istanbul, Turkey on June 29, 2021. Photo by Muhammed Enes Yıldırım. Anadolu Agency.

This March, the accident that blocked the maritime traffic in the Suez Canal for several days renewed the attention on the impact that straits have on international politics and economy. To begin with, a strait is an arm of water between two lands that connects two contiguous water basins. Maritime shipping is a core element in globalized trade and therefore, straits offer a key advantage in this context.

The Suez Canal is a man-made sea passage in Egypt, connecting Europe and Asia through the Red Sea. Its geographical position makes it one of the most important routes for trade of energy, oil and hydrocarbons, commodities, and consumer goods from Asia and the Middle East to Europe and the U.S. Its relevance can be measured by the fact that around 50 vessels travel the strait on a daily basis, amounting to roughly 18,900 in 2020. Given that more than 80% of global trade is moved by sea, about 12% of it passes through this waterway.

Without this canal, other routes for global trade would be possible but would involve a much longer shipping time, greater fuel consumption, and higher ship-operating costs. Certainly, the strategic position of straits is not taken for granted. Whoever controls the straits is careful to make the most of the almost “mandatory” passage of thousands of cargo ships per year, by charging tolls. Therefore, straits represent a significant source of national income. In the case of the Suez Canal, the traffic of vessels provides Egypt with about $5 billion a year in revenue.

The crisis in the Suez was caused by the grounding of the 400-meter-long Ever Given, carrying 18,000 containers headed to the Netherlands, engendering tailbacks and blocking the traffic of 400 other vessels. At the time, Lloyd’s List estimated that the cargo strand cost around $9.6 billion per day.

The Bab el-Mandeb Strait is, indeed, considered one of the most strategic gateways of maritime transport.

To make up for estimated losses, the Egyptian authorities sued the vessel’s owner, Shoei Kisen Kaisha Ltd., for almost $1 billion over profit and reputational losses, underlining the centrality that this channel holds not only in terms of international politics but also for the Egyptian national economy and politics. However, the final negotiation reached an agreement of approximately $200 million.

As the Suez Canal was finalized in 1869, another strait gained key importance in the geopolitics of the region. The Bab el-Mandeb Strait is, indeed, considered one of the most strategic gateways of maritime transport. This strait offers a way to connect the Arabian and Red Seas to the Mediterranean Sea, connecting Europe and Asia.

This waterway, located between the Arab Peninsula and the Horn of Africa, represents an economic and political entanglement of players in the Red Sea region, but also one of the straits most subject to violence, famine, piracy, and the global pandemic effects – most notably along the Somali coasts.

The securitization of the Bab el-Mandeb Strait is becoming a growing priority for several international actors.

However, the strait and the Red Sea basin are often used for political and strategic purposes, jeopardizing not only the efficiency of international trade but also undermining human security. The conflict in Yemen, which remains the world’s worst humanitarian crisis with thousands of civilians dead, 3.65 million internally displaced persons, and 16.2 million food-insecure Yemenis, has witnessed several times the seizure of ports located in the Red Sea region for strategic purposes, compromising the security of shipments through the route, but most importantly impeding aid and essential goods from reaching Yemen’s civilian population.

The securitization of the Bab el-Mandeb Strait is becoming a growing priority for several international actors, among them the U.S., Saudi Arabia concerning its fight against the Iran-backed Houthis in Yemen, and China with its economic interests Arab Peninsula.

Moving a little further east, the Strait of Hormuz plays a particular role in the oil trade and in the geopolitical dynamics between Iran on the northern coast and the United Arab Emirates and Musandam, an exclave of Oman, on the southern coast. The 20.3 million barrels of oil moved via the Strait of Hormuz per day in 2017 represented nearly a third of worldwide maritime oil commerce.

More to this, this sea passage represents the world’s most strategically important choke point, as a third of the global gas and almost 25% of oil takes this route, while also considering that an important part of the oil-dependent international economy’s wealth is situated there.

As in the previous cases, Hormuz is subject to intertwining national interests and geopolitical dynamics. While the Strait of Hormuz is regulated by the 1982 United Nations Convention on the Law of the Sea, Iran has only signed the convention but not ratified it. Furthermore, important and traditionally held interests in the strait, which Iran has acted upon in order to protect, have often resulted in standoff situations, leading to fear escalation between Iran and the West.

At this point, the logic behind the Turkish government’s decision to build a new canal in Istanbul becomes clear. Turkey already enjoys the presence of two straits in its territory, namely the Bosphorus and the Dardanelles Straits, which connect Europe and Asia through the Black Sea basin. However, as has been shown with the Suez Canal, the efficiency of the straits is undermined by the occurrence of accidents often due to intense traffic, security issues, and political and national interest entanglements.

To redress this issue, in 2011, the Turkish government started planning the construction of a third canal between the Black Sea and the Marmara Sea, and approved the project last year despite several dissident voices, which raised questions regarding the environmental impacts of the Canal Istanbul.

The construction of this new canal could bring forward some dynamics linked to national interests. Indeed, Turkish authorities declared that they are not willing to review the 1936 Montreux Convention nor place the new canal under its provisions. Russia was thus worried that this could lead to an increased presence of NATO-flagged ships in the Black Sea basin.

Nonetheless, it seems more likely that Ankara will use the Canal Istanbul in order to increase its own standing as a central player in the region. Furthermore, the Canal Istanbul will allow Ankara to regulate the maritime traffic passing through the new waterway at its own discretion, and to charge a fee for the passage – a factor of significant importance for the Turkish economy and for its influence in the region.

The construction of straits is not a new strategy, but perhaps it will become ever more beneficial for international actors to have better access and control over a sea passage, in view of an increasingly complex and globalized world order.

Alessandra Casareggio is a master’s student in international relations at the Free University of Brussels (ULB). She collaborates with Istituto Analisi Relazioni Internazionali (IARI) as a geopolitical analyst. Her research interests include migration, environment and displacement, human rights violations, and fundamental freedoms.