Warning: mysqli_query(): (HY000/1021): Disk full (/tmp/#sql-temptable-7857-3fda-64a6.MAI); waiting for someone to free some space... (errno: 28 "No space left on device") in /var/www/vhosts/politicstoday.org/public_html/wp-includes/wp-db.php on line 2162
 The Geopolitics of Turkey’s Gas Discoveries in the Black Sea - Politics Today
Skip to content

The Geopolitics of Turkey’s Gas Discoveries in the Black Sea

Turkey has a total of 133 billion cubic meters of gasification potential in the national gas network per day through new plants. 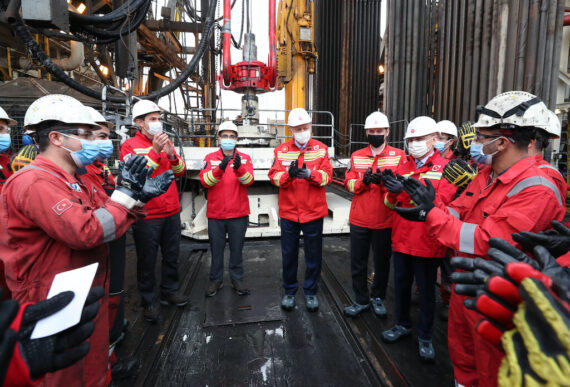 Recently, Turkey has made significant progress in the energy field. Turkey’s gas discoveries in the Black Sea region are regarded as a major achievement for the country’s energy security in the near future. Including the latest announcement, herein Turkey’s President Erdoğan declared the new discovery “good news” (müjde) as has become a tradition after every new discovery, the total quantity of the discovered reserves in the Black Sea reached 540 billion cubic meters (bcm).

According to the latest estimates in 2020, the total amount of the ten biggest gas discoveries in the world amounted to approximately 3.2 trillion cubic meters. Turkey’s gas discovery last year was the largest deep-sea discovery in the world and the second-largest of all gas discoveries. These discoveries and ones that might follow in the coming months can make Turkey a game changer in the regional and global energy markets, adding a further geopolitical importance to the country’s growing foreign policy capacity.

Opportunities Offered by the Gas Discoveries

Turkey’s gas discoveries will have effects on the country along two axes: economic and strategic. The economic value of these discoveries is estimated at $130 billion based on the current gas prices. In this respect, Turkey will gain a huge financial benefit. Moreover, Turkey is almost completely dependent on foreign gas resources and due to this dependency, it has to pay a significant amount for its energy imports annually.

Turkey’s annual gas expenditure is approximately $12.5 billion. With these discoveries, it is predicted that Turkey will save $5-6 billion and the total amount of the energy expenditure will be reduced by half. No doubt, the gas discovery and possible other discoveries are economically important for Turkey insofar as they will reduce the current account deficit due to energy imports and strengthen its energy supply security.

Gas discoveries in the Black Sea have broken a common conviction that there are no fossil fuel reserves in Turkey and that the existing ones are not economically profitable.

On the other hand, Turkey will increase its bargaining power in the global gas markets. As is known, Turkey had made some long-term contracts with its current gas suppliers. With the expiry of the gas contracts amounting to approximately 18 bcm in 2021 and 38 bcm in 2025, Turkey will have an important chance to negotiate on more competitive gas prices and flexible terms – especially with Russia. As a result, Turkey will have an opportunity to reduce its energy import bill.

With Turkey gradually becoming self-sufficient in energy in the medium and long terms, the country’s foreign policy can also be expected to be more independent as Turkey seeks further self-reliance and multiple engagements in a world of multipolar politics.

The Production Process of the Black Sea Gas

It is believed that the gas reserves in the Sakarya gas field will be ready to pump the main grid in 2023. According to the estimates of the Turkish authorities, the plateau production will start in 2028 at the latest. At the start, the gas production will reach 10 million cubic meters per day and the production amount will increase gradually until it reaches the plateau level.

Looking at different examples in the world, these dates are reasonable. For instance, in Egypt’s Zohr field, which was discovered in mid-2015, production started at the end of 2017, approximately 28 months after the discovery. Also, in Israel’s Tamar field, one of the most important natural gas discoveries in the Eastern Mediterranean, the production process began 3.5 years following the discovery.

Therefore, Turkey can reasonably install the floating platforms, pipelines, and production facilities within three years. At the same time, Turkey should definitely increase its technological capacity and know-how within this period in order to accelerate the efficiency of the process.

The global energy equation will be shaped around three issues: ownership of energy resources, controlling the energy resources, and transferring them to the international markets. Turkey carries out extremely important energy projects so that it can play an essential role in the above equation such as the Trans-Anatolian Natural Gas Pipeline (TANAP) from Azerbaijan through Georgia and Turkey to Europe, and TurkStream from Russia to Turkey and Europe. Via these pipelines, while Turkey receives 22.75 bcm of gas annually, an additional 25.75 bcm will be transferred to the European gas network via Turkey. Therefore, these two pipeline projects strengthen Turkey’s claim as an energy hub.

In addition to this, Turkey’s underground gas storage capacity is currently 4.5 bcm and this capacity is planned to reach 11 bcm – approximately 20 percent of the country’s annual gas consumption – in 2023.

Another dimension of Turkey’s recent natural gas discoveries in the Black Sea is that Turkey now has a substantial relief from its dependency on imported fossil fuels. Moreover, as a net importer of fossil fuels, the possibility of finding new hydrocarbon resources in the region provides an important motivation for Turkey.

Currently, the local and international gas infrastructure of Turkey is sufficient. Natural gas is delivered to all cities of Turkey. In addition, nearly 100 bcm of gas can potentially be transferred to Europe via Turkey in the long run which corresponds to almost 20 percent of the European annual natural gas demand.

Furthermore, Turkey is becoming a prominent market player with its liquified natural gas (LNG) facilities. With two LNG plants (Marmara Ereğli and Ege-Gaz Aliağa) and two floating storage and regasification units (FSRU) (Etki Liman and Hatay-Dörtyol), Turkey is the top country in the region in terms of LNG facility capacity.

Turkey has a total of 133 billion cubic meters of gasification potential in the national gas network per day through these plants. By creating a domestic seismic and drilling fleet and by virtue of the new natural gas discoveries and infrastructure investments in the Black Sea, the country has a crucial advantage in the independent pursuit of exploration activities in both the Black Sea and the Eastern Mediterranean.

VIDEO: The economic impacts of Turkey’s gas discovery in the Black Sea

Also Read
Will Turkey Delimitate Its Maritime Borders with Egypt and Palestine?