The hate crimes against Muslims is destroying European values, which once were held in high esteem. 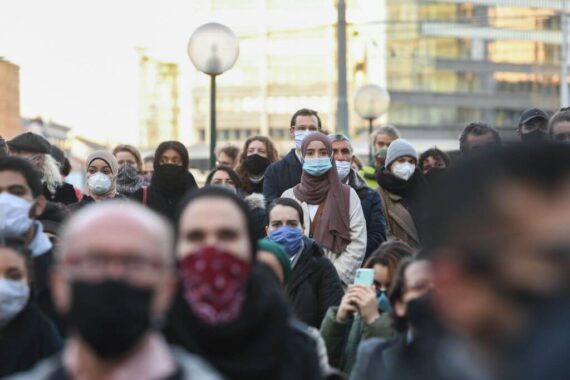 People attend a vigil organised by the European Union of Jewish Students of Vienna university and the Austrian Muslim youth organisation after the terrorist attack in Vienna, Austria on November 5, 2020. - Austria is mourning four civilians shot dead by a 20-year-old Islamic State sympathiser who attacked a popular nightlife area in the heart of Vienna on November 2, 2020, on the last night before a second coronavirus shutdown. Photo by HELMUT FOHRINGER/APA/AFP via Getty Images.

On May 27, the Austrian government presented an Islam Landkarte (Islam Map) as a novel contribution and a breakthrough tool to fight “political Islam.” However, this map has been around for years. The project was initiated back in 2012, by Ednan Aslan, the head of the Institute for Islamic Theological Studies at the University of Vienna and the Documentation Center for Political Islam which was set up by the government.

Nine years later, Susanne Raab, minister for integration from the ruling conservative party (ÖVP), launched a website with an interactive map listing the names and locations of more than 600 mosques and Muslim organizations in Austria as well as their alleged connections abroad.

The map is designed to serve as a monitoring tool for the Documentation Center for Political Islam which is a data-collecting center for integration policy and security agencies. However, the data it collects is problematic to the extent that it is outdated and incorrect; some of the names recorded on the website are no longer actively in service. The most problematic part, however, is that it publishes private addresses of organizations.

In her presentation, Minister Susanne Raab (ÖVP) further explained that the “Islam Map” does not mean a general suspicion of all Muslims and the intention is exclusively to fight “political ideologies, not religion.”

Even though, Austrian officials categorize the map as an instrument of combatting “political Islam,” which is an ambiguous term as adopted by the Austrian government that describes any Islamist movement seeking to restructure society according to religious ideas and opposing democratic principles, there is no general agreement on what exactly can be labelled as an Islamist movement.

This has resulted in the listing of cultural centers for Bosnian and Albanian immigrants, youth organizations or even sports clubs, without any proof or any links to extremism. Faika El-Nagashi, the spokeswoman for integration of the Greens party which is part of the ruling coalition, affirmed that “no Green minister or MEP was involved or even told about it. The project mixes Muslims with Islamists and is the contrary to what integration policy should look like.”

There was a massive backlash against this action, not only from the Muslim community in Austria but also from the University of Vienna, which was added as a partner to this project.

There was a massive backlash against this action, not only from the Muslim community in Austria but also from the University of Vienna, which was added as a partner to this project. University officials have since distanced themselves and prohibited the use of the university logo on the map’s page with the argument that “the logo on the site gives the impression that the University has scientifically edited and reviewed the contributions, which is not the case.” Meanwhile, the logo has been removed and instead “A project of the University of Vienna – Institute for Islamic Theological Studies – Islamic Religious Education” has been added to the website.

The Islamic Religious Community in Austria (IGGOE), the official representative body of Austrian Muslims, expressed clear concerns about the publication of the map. The IGGOE serves as an umbrella organization for more than 250 Muslim associations all across Austria. In its press release, the IGGOE warned against the dangers of stigmatization of Muslims in Austria. In fact, the IGGOE believes that the campaign not only fuels the continuously growing racism against Muslims, but also exposes Muslim citizens to a massive security risk.

Muslim Youth Austria announced legal action against the violation of personal and data protection rights. An announcement or complaint does not exist yet, however, as a spokeswoman of the organization has declared that “the publication of all names, functions and addresses of Muslims and Islamic institutions represents an unprecedented border crossing and the organization will exhaust all legal possibilities against it.”

While Muslim Youth Austria demands the end of this criminalization of Muslims and that the Islam Map be removed from the internet, the association for Jewish Austrian Students in Austria showed solidarity and sharply criticized the map.

While Muslim Youth Austria demands the end of this criminalization of Muslims and that the Islam Map be removed from the internet, the association for Jewish Austrian Students in Austria showed solidarity and sharply criticized the map. The students told Politics Today that Muslims must not feel “observed and placed under general suspicion and at the same time fear because locations of Muslim institutions are exposed to the public, which is a handbook case of discrimination.”

On May 31, the spokesperson for the secretary general at the Council of Europe, Daniel Holtgen, stated that “[u]nfortunately, the ‘Islam Map’ of Austria overshoots the mark, serves existing resentments and therefore has a potentially counterproductive effect. Many Muslims perceive the form and timing of the publication as extremely discriminatory. They feel stigmatized and feel their security threatened by the publication of addresses and other details. The ‘Islam Map’ of Austria should therefore be withdrawn in its current form.”

In fact, the launching of an interactive “Islam Map” serves as a watch list or a blacklist. The map will only serve as another blow to the presence of Islam in the country, as the map disclosing Muslim organizations not only caused controversy in the country but also led to a spate of Islamophobic incidents. Moreover, the map stirs up prejudices and puts all Muslims under general suspicion. Prior to the introduction of the “Islam Map,” the Documentation and Counseling Center Islamophobia and Anti-Muslim Racism – also known as the Dokustelle Österreich – released the “Anti-Muslim Racism Report” with 1,402 cases of racism against Muslims in 2020 alone. This records an increase of approximately 33% from the previous year.

After barely a week since the website of the controversial map was launched, the government decided to take the map offline. Not only was it criticized by Austria’s Muslim community, various people from all walks of life reacted on the website. The Catholic Church, for example, joined the criticism and rejected the map. The head of the church stated that Islam is now “under general suspicion.” He wondered why Islam has a map and other faith communities do not.

Ümit Vural, the head of the IGGOE, warned against stigmatizing all Muslims living in Austria as a potential danger. His organization stated that several Muslims had already been attacked and a mosque was vandalized since the map became available online. Muslim Austrians Initiative chairman Tarafa Baghajati told broadcaster ORF, “Imagine if we had a Judaism map or a Christianity map in Austria.”

It is without doubt that this map is an indirect attack on all Muslims in Austria, many of whom are of Turkish descent. Tanju Bilgiç, spokesman of the Ministry of Foreign Affairs of the Republic of Turkey, who has been calling for an end to Islamophobia for a long time now, declared the map to be “xenophobic, racist, and anti-Islamic.”

Although the “Islam Map” has been taken offline, the attention it got from anti-Muslim, racist groups is worrying. The map definitely signifies a general suspicion of the Muslim community. The growing Islamophobia in Austria and the rest of Europe makes Muslim Europeans, and especially young Muslim Europeans, feel concerned about their future. The social pandemic of hate crimes against Muslims is destroying European values, which once were held in high esteem.

Büşra Öztürk was born and raised in Austria. She has completed her undergraduate and MA degrees in political science at the University of Vienna and is currently studying Law. Her areas of interest are Middle Eastern studies, international humanitarian law, fundamental human rights, international and European politics, especially migration and xenophobia (in particular Islamophobia). She works as a Research Fellow at OSCE (Organization for Security and Cooperation in Europe) in the field of Human Rights.