The AK Party prepared the Constitutional amendment proposal that included a “Presidential System” and proposed this amendment to the Turkish Parliament after negotiations with the MHP. The core objective of the proposal is to abandon the 1982 Constitutional model, which was drafted following a military regime. 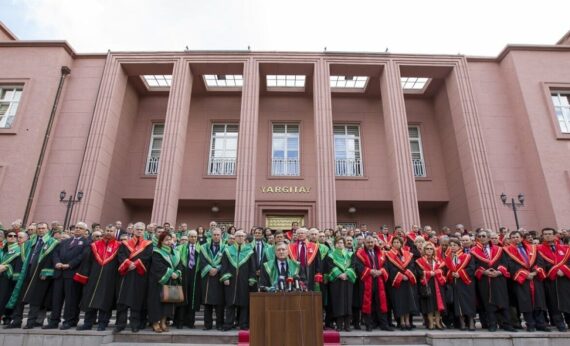 Since the adoption of the 1982 Constitution, the text has been subject to debate and several amendments. Following the elections in 2011, there was hope for a new Constitution, but it disappeared after the failure of an agreement in the Constitutional Reconciliation Commission on the revision of the text. Immediately after the failed July 15 coup attempt, Turkish political parties agreed on a brief Constitutional package. However, the subsequent political tension prevented the carrying out of the project. Surprisingly, the leader of the MHP Devlet Bahceli, initiated a new process by throwing his support behind an amendment in the Constitution that would be put forward by the AK Party. The AK Party prepared the Constitutional amendment proposal that included a “Presidential System” and proposed this amendment to the Turkish Parliament after negotiations with the MHP. The core objective of the proposal is to abandon the 1982 Constitutional model, which was drafted following a military regime. Since the 1982 Constitution does not provide a conventional parliamentary system, it facilitated the transition to the Presidential system.

Neutrality of the Judiciary

It is impossible to separate neutrality from an independent judiciary. An independent judiciary – without the influence of any individual or institution, whether inside or outside of the judiciary – upholding the law with impartiality to avoid any bias or without any prejudice whatsoever is essential. In other words, a judge must decide independently and irrespective of any personal benefit, ideology, belief and world view.

These examples show that the incorporation of the principle of neutrality in the proposal into the 1982 Constitution is compatible with human rights conventions and will address the deficiencies in the present system.

Another reason for this addition is related to the longevity of the bureaucratic tutelage in Turkey. The army was one of the basic elements of the judicial tutelage that was established by the 1961 Constitution, with the judiciary using it as a mean to maintain its control. During this period, the judicial tutelage preferred the protection of the guardianship of the state power against the political power along with the defense of its privileges, rather than protecting basic rights or establishing the rule of law.  The activities of the judiciary have always been defended with an emphasis of the independence of institutions, however those in power have often turned a blind eye to the principle of impartiality. In other words, the emphasis on neutrality in the current proposed Constitutional change is a result of the reaction to the bureaucratic tutelage, which is trying to take the power of the democratic governance of political power under its jurisdiction.

Supreme board of judges and prosecutors of Turkey (HSYK)

The new Constitutional proposal reduces the number of members of the Supreme Board of Judges and Prosecutors (HSYK) of Turkey from 22 to 13, and ends the practice of direct election of judges from other judges in the HSYK. According to the proposal, the Minister of Justice and the undersecretary of the Minister will be members of the HSYK. Four members will be appointed by the President, and the remaining seven will be elected by the Parliament. The Parliament will select three of these members from the Supreme Court of Appeals, with two of these being a teaching fellow and the third being a barrister, and one elected from among the members of the Council of State.

The first point is an important departure from the old system and it abandons the method of selection of a number of members of the HSYK by judges and prosecutors. This process was first introduced as a democratic method by the AK Party in 2010. However, the practice of this method for seven years and two electoral terms has shown that it can have negative consequences posing a danger to the Turkish democracy.  Under the previous system, the HSYK members were elected by the judges and prosecutors of this country, but this election process became politicized, with blocks of voters following various political movements. The most powerful political movement was composed of the members of the Fetullah Gülen Terrorist Organization (FETO).  This caused great damage to the judiciary. The electoral procedure essentially insulated the courts from oversight, deterred judges and prosecutors from completing their primary duties, politicized the judiciary and encouraged the emergence of political or ideological camps among the judges and prosecutors. During the course of the HSYK election, the candidates were favored for their political views, beliefs, ethnic and sectarian identities rather than on their merit or professional experience. This should not be accepted under any circumstances for an institution such as the judiciary. This politicization of the judges was seen in the press releases of the HSYK, both before and after the two most recent elections in 2010 and 2014.

Additionally, all of the camps and political parties that were parts of the judiciary were opposed to the procedure of the election of the members. The main opposition party CHP proposed that only the highest courts be allowed to elect a member of the Constitutional Court. The election procedure was totally abolished in the proposal of the MHP.

It can be seen that the election of seven members by the Parliament by way of a qualified majority, was meant to prevent a simple majority and to force parties into a compromise. In response to these positive arrangements, we can say that the lack of recognition of the authority of the HSYK members to select a part of the Supreme Court and the Council of State is a deficiency of the proposal.

The proposal also provides a complete abolition of military prosecution. Article 13 of the proposal reads: “Military courts outside disciplinary courts cannot be established. In the event of a war, however, military courts may be set up to take charge of the crimes committed by soldiers in relation to their duties.”

The military jurisdiction is one of the most effective elements of the tutelage system that was later reformed with the establishment of the 1961 Constitution. After the 1960 military coup, the Military High Court of Appeals was established in the Constitution, and the Supreme Military Administrative Court was also added following the 1970 military memorandum.

In the aftermath of the 1980 coup, the power of the military jurisdiction was increased by enforcing its autonomy. With the 1960 coup d’état and the subsequent intervention of the army in the government, each Constitutional change has strengthened the so-called “guardianship function” of the military judiciary.

The present Constitution broadly defined the scope of the military courts to the point that was unacceptable in a democratic state of law, and in 2010 a Constitutional amendment partially addressed these issues. In spite of the steps taken to bring military tribunals under democratic rule of law standards, military courts were preserved as a separate judicial branch in addition to the civilian judicial jurisdiction. It is rare to find an independent military judiciary and a high court for military judiciary in Western democracies.

This is the case for the Supreme Military Administrative Court. It appears that military prosecution is an important tool for the military and for the system of judicial tutelage. In this system, the army develops “a two-headed structure in the judiciary” as a result of a desire to create its own autonomous domain independent of the civilian administration.

Finally, it is important to emphasize that one of the most important institutions in which FETO is organized is the military judiciary. This presence allowed a group to gain maximum leverage in the tutelary structure. Those who closely followed FETO pointed out that they were very powerful in the military judiciary, and included high level military judges. They were even almost completely controlled by them, and they had members in many important positions, such as the General Staff’s legal adviser. Additionally, the Ankara Chief Public Prosecutor’s Office made a clear statement regarding the activities of the FETO in an indictment presented prior to the July 15 coup attempt. It should be noted, however, that the question of military jurisdiction cannot be explained solely within the scope of the FETO probe, and cannot be resolved with the expulsion of judges and prosecutors tied with FETO. For this reason, a complete removal of the military judiciary was long overdue.

With the absence of a military judiciary and a removal of two high military courts, the number of members of the Constitutional Court will decrease from 17 to 15. Additionally, because of the change in the government system, the provision that excludes the judicial review of the activities of the President is removed from the Constitution. Finally, judicial review is strengthened by removing the provision that excludes judicial review of the decisions of the Supreme Military Councils concerning the members of the military.