The vital question then is, "Who is whose enemy and who is whose friend?" 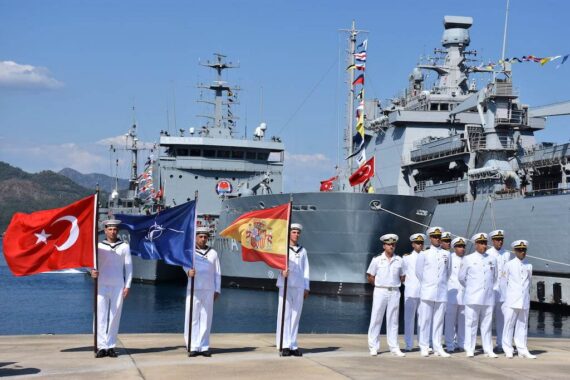 Changes in the modern warfare have direct repercussions on foreign policy, strategy, and decision-making processes. Former world war period types of alliances, clear-cut polarizations, actors uniting one-sidedly behind common goals and forming coalitions are all over. Although the Russian invasion of Ukraine seems to have brought us back to the Cold War era, the faithful alliances of the past have no meaning in today’s politics.

The latest conflicts in Afghanistan, Iraq, Libya, and Syria exhibit new behavioral patterns, in which actors could cooperate, compete, or do both at the same time. Turkey sets a good example to understand this relatively new mode of cooperation-cum-competition-based world order.

During the Cold War, Turkey invested heavily in the Western bloc for its security against the Soviet Union through an extensive integration into NATO and European economy, politics, and culture. Concerns for Turkey’s peaceful future mobilized its decision-makers to obtain insurances from NATO and to become a member of the European community as a result of threats posed by Hafez Assad’s pro-Soviet Syria and the ideological threat posed by the Islamic Revolution in Iran. The burden of this Cold War-era alliance was to protect the southeastern flank of the Western bloc.

Read: Self-Sufficiency and Complex Interdependence in the Age of Global Crises

Three significant events have occurred during and after the end of the Cold War that have affected Turkey’s security and the Western perception of Ankara. The first event was Turkey’s 1974 peace-making intervention in Cyprus per the Zurich Agreement of 1959. The coup d’état by the Greeks and Greek Cypriots, followed by a racist and discriminatory suppression of Turkish Cypriots, contradicted the commitments given by the Western block, and it was the communist and racist predisposition of the Greeks and Greek Cypriots that challenged the island’s decade-long status quo. Interestingly, the U.S. and Europe applied sanctions on Turkey, with a letter by then U.S. president Lyndon B. Johnson, rather than standing against the threat by the communist and ultra-nationalist Ethniki Organosis Kyprion Agoniston (EOKA).

The second event was the 1980 military coup in Turkey. The terror threat was the justifying argument, coinciding with a political stalemate, for the military intervention in the democratic political process. Turkish politicians understood that Western allies could rely on the Turkish Armed Forces as an essential actor to deny infiltration of Soviet-backed marginal groups into the country and pre-empt a possible shift of Turkey’s political axis.

Two years later, in 1982, Greece was accepted again into the alliance by the consent of the military regime of Turkey. The idea behind this move was to mend the United States’ containment policy to create a solid resistance to a possible Soviet expansion towards the warm waters of the Mediterranean. Thus, Turkey was needed and became an “ally” once again, even though its intervention in Cyprus was “well-noted.”

The third event came with the collapse of the Soviet Union. Rather than investing in security infrastructure, development and prosperity became essential priorities both for the U.S. and Europe. The conflicts in the Balkans and the Caucasus reminded the world of new sorts of conflict and response mechanisms through the peace-tagged collaborative military interventions and persuasive diplomacy. This pattern paved the way for a loose unity in the Western alliance wherein each state attempted to endorse its own agenda through a bargaining process.

Given its rising soft power, Turkey had to be monitored through checks and balances. The Turkic and Muslim populations in the Balkans and the former Soviet Union could be persuaded of the West’s good will. This “good will” would embrace Turkey, too; however, with a caveat of not allowing the latter to dominate the region.

Meanwhile, the Russian military occupation of Chechnya and the emergence of PKK terrorism burst the illusion among the public that Western support was forthcoming and reliable. It turned out that the spirit of alliance was merely a slogan on paper. In reality, the PKK terrorist organization, then Turkey’s main threat, could enjoy a safe haven in the territories of allied states.

During the Cold War and in the following decade, Turkey was counted as an allied country due to the common threat and collective security perceptions with the West. This was also to keep Turkey on the Western front. 9/11 paved the way for redesigning the relations with Turkey, which started to serve as an ideal model of a Muslim democracy given the United States’ military operation in Afghanistan to defeat al-Qaeda. The operation was called “Operation Enduring Freedom” and was participated by Muslim countries as well.

Turkey’s status was precious since Ankara was the only Muslim member of NATO and a strategic partner of the United States, and its presence could justify the political objectives of the U.S. military operation. The message was simple: this intervention is not a crusade against Islam but a war on terror. A decade after the collapse of the Soviet Union, a new mode of political alliance was on the agenda.

The turning point for the new politics of alliance and Turkey’s role in it was when the U.S. looked at Turkey for support in its invasion of Iraq. The Turkish Parliament rejected both a combat role in Iraq and letting American ground troops use Turkish territory. This event, which challenged Turkish-American relations, took place during the reshaping of a new era of politics of alliance that would be based on proxy-based conflicts—as for example in the Syrian civil war. Turkish-American relations escalated due to American decision-makers’ prejudices. Ankara was regarded as an ally, but was to be punished for its parliament’s decision.

In the Syrian theatre, the politics of “competition and cooperation,” “confrontation and collaboration” or “friend and adversary” have significantly changed. The pattern of proxy exploitation in hybrid frameworks complicated who is an ally or who is an enemy. How so? Let us examine some sample relations.

·       The PKK/PYD/YPG, under the umbrella of the Syrian Democratic Forces (SDF), is a proxy of the U.S. while they are directly in contact with Russia, a “traditional” U.S. enemy.

·       Russia is cooperating with the U.S., occasionally in coordination with Turkey. On the other hand, each of these actors delineates their areas of influence decisively.

·       Hay’at Tahrir al-Sham (HTS) in Idlib is considered a radical, terrorist group by the U.S., but has an engagement with the American intelligence to counter the Russians and Daesh (ISIS) on the ground.

·       Israel and Russia act in coordination in Syria (with minor exceptions). But Israel is prone to hit the Syrian regime or Iranian forces, while Russia tolerates the Israeli air assaults, also protecting the Syrian forces.

·       Iran is keen to support the Syrian regime alongside Russia, but Russia is also a competitor. Russia’s preferred option would be to mediate between the Free Syrian Army brigades and the regime-Iran coalition.

·       Russia patrols the north of Syria with the PKK/PYD/YPG/SDF while the U.S. Army protects them so as the Assad regime does not capture the oil fields.

·       Turkey, Iran, and Russia are coordinating within the framework of the Astana Peace Process while competing so as not to give the other any leverage that could lead to superiority.

·       Most European countries are part of the Global Coalition Against Daesh/ISIS and, at the same time, promote the PKK even though it has organic ties with the PYD/YPG/SDF. These terror groups, which European politicians praise, are one of the main reasons behind the refugee crisis and IDP flow. At the same time, these same politicians pressure Turkey to stop the refugee flux to Europe.

The vital question then is, “Who is whose enemy and who is whose friend?” What is undeniable, however, is that it is the people on the ground who suffer the most from these complex, contradicting relationships.