The Road Ahead After the June 24 Elections

Having handled serious domestic and foreign policy crises over the years, including party closure cases and a failed coup attempt, Erdogan’s campaign for the presidential system has been accepted by the Turkish electorate. 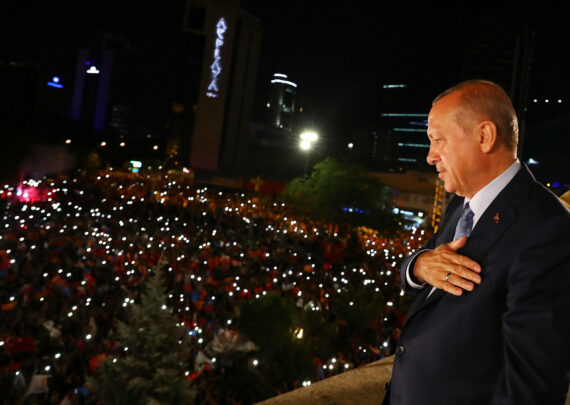 President of Turkey and leader of the Justice and Development Party (AK Party) Recep Tayyip Erdogan (R) greets the crowd from the balcony of the ruling AK Party's headquarters as people hold lit mobile phones following his election success in presidential and parliamentary elections in Ankara, Turkey on June 25, 2018. Anadolu Agency

Sunday’s elections in Turkey have finalized the transition to the presidential system with the victory of President Erdogan and his party. Erdogan has advocated and campaigned for this system change since his years as the Prime Minister, arguing that Turkey needed a political system based on the people’s will not on the will of the civilian and military bureaucratic elites. Having handled serious domestic and foreign policy crises over the years, including party closure cases and a failed coup attempt, Erdogan’s campaign for the presidential system has been accepted by the Turkish electorate. Sunday’s elections results are a proof of this reality.

The AK Party has passed legislation in the past year to prepare and adjust to the new system but there will be more work to be done in order to restructure the executive branch. The AK Party’s seats in parliament is short of a parliamentary majority, which means that it will need to recruit the support of other parties, starting with the MHP, to implement the party program and election promises. The MHP has worked with the AK Party and entered into an alliance in the elections, which provides a ground for further cooperation. As I wrote before the elections, the parliamentary distribution will not hamper the creation of the cabinet and functioning of the executive branch.

As the presidential system requires the restructuring of the political system and fine-tuning of the relationship between the executive and the legislative branches, many details have yet to be worked out. But, President Erdogan has created the necessary groundwork to implement his agenda effectively by striking an alliance with the MHP, which has achieved better than expected results in the election. For major legislative action as well as budget negotiations, Erdogan will likely seek support from the MHP. The MHP will continue to be a key role in the legislative process as it has in the past.

One of the most serious consequences of the elections might be the leadership question in the CHP. The CHP’s presidential candidate Ince has openly challenged the current party leader Kilicdaroglu in the past for electoral failures. Sunday’s results show a large gap between Ince’s votes (%30.64) and the CHP’s electoral showing (%22.64). Ince’s relative success and the party’s perceived failure can pave the road for Ince to challenge Kilicdaroglu once again. However, if there is an understanding between the two leaders that the party voters would vote strategically to ensure that the HDP passed the electoral threshold, such a inter-party rift may not be imminent. However, the 8% discrepancy will most likely force yet another debate around the CHP’s leadership.

While the adjustments to the new system are implemented, the March 2019 local elections will be just around the corner. Political parties will enter the new year in campaign mode and the local elections results can serve as an indicator of party performances. Local elections in Turkey always have a different dynamic than general elections, as they can depend much more on local politics. The March elections will not be different but it will have less impact on the executive branch. It will serve more as an indicator of satisfaction with party performances in parliament. Political parties will focus on agenda items that will help them in local elections. This could mean that parties would have more incentive to strike a compromise with President Erdogan to show the electorate that they are in the business of delivering their election promises instead of obstructing.

The June 24 elections are historic not only for sealing the deal on the adoption of the presidential system but also providing political stability for the next five years. There will always be crises and spoilers that will test the new system. However, in this last election, the Turkish public has spoken definitively.