Three Scenarios for the post-June 24 Elections 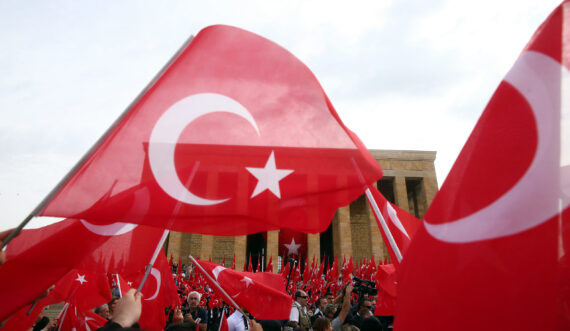 People wave Turkish flags as they visit Anitkabir, Mustafa Kemal Ataturk’s mausoleum, to mark May 19 Commemoration of Ataturk, Youth and Sports Day in Ankara, Turkey on May 19, 2018. Anadolu Agency

Turkey will hold one of the most critical elections in its history on June 24. They are critical because they are not an exchange of seats between political parties or transfer of power from one political party to another in a democratic country. On June 24, the people will rather decide whether the country should revert the old oligarchic regime in which the bureaucracy used to hold power and sovereignty or whether it should consolidate its burgeoning democratic regime in which power and sovereignty lay with the people. Besides, on June 24 the people will also decide whether the country should gain more autonomy in international politics or continue its age-old foreign policy of disengagement and dependency.

The AK Party-MHP alliance proposes to render the people’s will as the ultimate authority in the country’s political life and make Turkey great again in international politics. The CHP-Iyi Party-SP alliance, on the other hand, claims to restore the republican ideals of “Old Turkey,” which are characterized by modernist authoritarianism and bring the country back in line with the civilization, namely the West. Thus, the elections on June 24 will rather portray a moment of historical decision on the country’s regime type and national independence.

Indeed, the themes of democracy and independence will put their seal on the elections. Around these themes we have three scenarios for the post-election Turkey. In the first scenario, President Erdogan wins the presidential elections and the AK Party-MHP alliance gains the majority in parliament. This will mean that the people still hold on to their decision to switch to the presidential system on April 16, 2017. If this happens, the presidential system will be consolidated and democracy will be recognized as the only game in town.

For this will put pressure on the opposition to recognize the rule of the people’s will as the supreme will in politics and therefore the search for bringing the country back to an oligarchic regime will get shelved for good. This might also be accompanied by the democratization of the opposition’s view of international politics through its recognition of the country’s political authenticity and autonomous political will. More, terrorist organizations such as the PKK will face contraction of room for maneuver and FETO will give up hope for a comeback.

In the second scenario, President Erdogan wins the presidential election and the CHP-Iyi Party-SP alliance obtains the majority in parliament. This will display that the people still support the decision to switch to a presidential system and the consolidation of the democratic regime, yet they find the political actor –the AK Party-MHP alliance– unsuitable for this task. Encouraged with these results, the opposition will follow a politics of destabilization by blocking the presidential decrees in parliament and attempt to convince the people that the presidential system is not that good for the country. This will open up the door for changing the country’s direction back to oligarchy, emboldening the terrorist organizations such as the PKK and FETO and increasing the chances for foreign powers to influence the country’s domestic and foreign policies.

In the third scenario, President Erdogan loses the presidential election and the CHP-Iyi Party-SP alliance gains the majority in parliament. This will show that the people have changed their decision to switch to a presidential system and do not believe that President Erdogan or the AK Party-MHP alliance are suited for the task of democratizing the country’s domestic and international politics. In this situation, the opposition parties and their partners in the state apparatus will immediately attempt to take control of the country and embark on stifling the people’s demand for democratization. The people will doubtlessly show a considerable resistance to the restoration of the status quo ante at the outset, yet the lack of leadership and organization on the part of the popular front will in time give the upper hand to the oligarchic forces. In that political vacuum, the PKK will at once start a war of attrition in Northern Syria and Eastern Turkey whereas FETO will pick itself up and become a significant actor in the state apparatus once again.

Depending on the results of the election and whether the presidential election goes to the second round, one thing is certain: a new domestic makeup is waiting for Turkey.