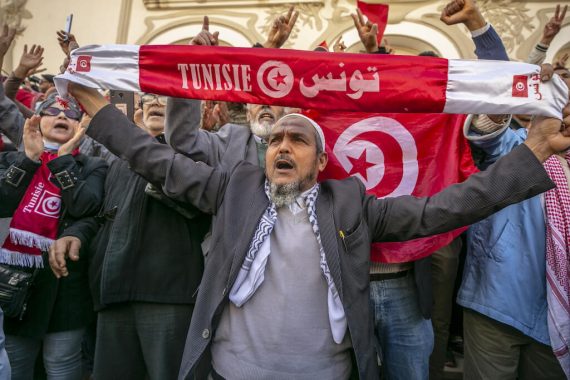 There is some striking footage on Tunisian national television and the official Facebook page of the Tunisian Presidency showing scenes of Kais Saied‘s commemoration of Martyrs’ Day in Tunisia on April 9, 2022. He was filmed speaking to the leaders of the land, sea, and air forces in Tunisia, defending the coup he carried out on July 25, and portraying it as a response to the popular will. The generals were seen listening to him with full concentration, appearing to approve of what he said.

There is no doubt that these pictures were a deliberate message from Saied to his opponents at home and his critics abroad, emphasizing that he has the support of the armed forces, and will continue to carry out his coup unperturbed. Days earlier, on the evening of March 30, Saied had appeared on television from his office at Carthage Palace, also in the presence of army commanders, announcing the dissolution of the Tunisian parliament.

March 30, 2022 was a very important day in Tunisian politics. The Tunisian parliament succeeded for the first time since Saied’s declaration of its suspension last year to hold a virtual session with the presence of more than half of its members and voted on a new law abolishing and annulling all orders and decrees issued by Saied since the coup.

The online parliamentary session captured the attention of local and international media, many of which broadcasted the entire proceedings which lasted several hours. The session itself represented a clear defiance of Saied’s coup, and laid bare Saied’s violation of the constitution and violation of the law. The session was also significant as it refocused attention back to the parliament as an existing legitimate institution of authority in parallel to that exercised by Saied, the parliament being constitutionally and legally greater.

Saied was unable to bear this situation even for a few hours, and appeared on the same evening in a televised speech announcing to the leaders and officials of the armed forces that he had decided to dissolve parliament with immediate effect, despite publicly telling the National Security Council in a televised meeting two days earlier that he did not constitutionally have the power to do so. Saied had said something similar on the day he announced his coup last July.

It is in this context that the scenes of April 9, where Saied addressed the armed forces’ officers, are important. After being rattled by the parliamentary session that voted to end his emergency rule and annul his emergency measures, Saied sought to send a clear message: the armed forces are with me and support my decisions, and therefore, I will do whatever I want.

In a truly law-abiding, democratic state, military leaders should have declared clearly and courageously their explicit rejection of the dissolution of parliament because it was unconstitutional, and the country’s most influential trade union, the Tunisian General Labor Union (UGTT), should have taken the same position, as well as all political parties and civil society organizations in Tunisia.

Unfortunately, that did not happen. The army continues to show full compliance with Saied’s decisions despite their apparent violation of the constitution, and the UGTT continues to reiterate its support for the 25 July coup. Many left-leaning political organizations are also taking the same position, most likely due to their desire to see the exclusion of Ennahda—seen as the main representative of political Islam—from parliament and from the country’s decision-making circles. This is essentially what is weakening the Tunisian opposition against the coup of Kais Saied: the silent position of the armed forces and the public support of the Labor Union.

However, Saied is unable to feel comfortable and reassured, because the circle of his opponents is expanding day by day, and the political and moral pressure on the armed forces and the Labor Union is steadily increasing. In addition, there is a law passed by parliament on March 30 that repealed all Saied’s decrees and orders, and indicated that there is another legitimate authority parallel to him in the country.

There is also Rashid Ghannouchi’s own personality and presence as a speaker of parliament and president of Ennahda, and as a person with a special status and long history in Tunisian politics, when by comparison, Kais Saied has virtually none. Ghannouchi is acting with reason and wisdom, while adopting a clear position that rejects the coup, and considers it a rebellion and a departure from the constitution.

Saied could have downplayed the importance of his opponents if his management of the country’s social, financial, and economic affairs had worked and improved Tunisians’ lives. But it has not. The financial, economic, and social situation in Tunisia today is worse than it was before the coup. These are facts that most Tunisians agree on, just as they agree that there does not seem to be any solution on the horizon.

As for international positions on the coup, so far Saied has found no real financial backers to rely on in the manner Abdel Fattah al-Sisi was able to in Egypt. Al-Sisi found reliable allies in Saudi Arabia and the UAE that supported his government with large sums of money from 2013 to the present.

If we consider all these facts and elements of the current political situation in Tunisia, we can say that the coup is facing real difficulties, but that it greatly benefits from the silence of army leaders and the support of the Tunisian General Labor Union. Meanwhile, the opposition has been able to maintain its presence and strengthened its moral authority by the decision of the parliament, which abolished Saied’s orders and decrees. It is also clear that neither Saied nor his opponents is capable of achieving a decisive victory in this battle.

My personal opinion is that the coup represents a major threat to Tunisia’s democracy, stability, and national unity. If its opponents want to overcome it and put a peaceful end to it, they should form a broad political front with a political platform that opposes the abolition or the change of the constitution before a representative parliament is freely elected. The opposition should agree and insist that early legislative and presidential elections must be held as soon as possible.

There are some opponents of the coup who want to take the opportunity to change the constitution now, before going to the elections. I see this as another coup. We must uphold the right democratic principles and the rule of law. Otherwise, I fear that Tunisia will fall into a dark hole for a long time to come, something that all Tunisians ought to reject and do their utmost to prevent.

Also Read
Tunisia at a Crossroads: Either Tyranny or Democracy Lies Ahead