There has only been partial UN success in reporting, investigating human rights violations, and helping Ukrainian civilians. 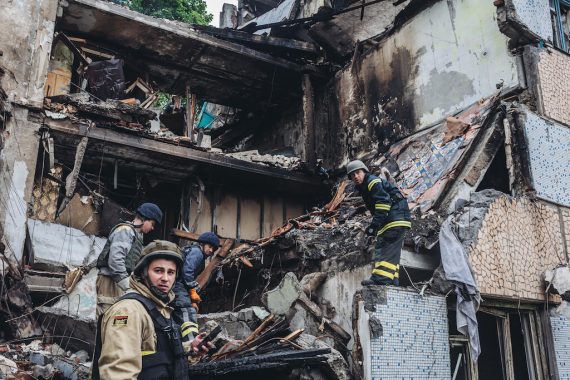 Almost 70 years after the establishment of the United Nations (UN), the aim to protect international peace and security remains as relevant and urgent as ever. Today’s conflicts cause immense human sufferings in terms of human casualties, displacement, and humanitarian needs. Approximately one and a half billion people live in about fifty conflict zones around the world under the threat of violence.

The UN was established to prevent the reoccurrence of the great destructions and humanitarian sufferings caused by the past wars, World War II being the most prominent. For a series of reasons, however, the UN has mostly failed to fulfill its most fundamental task, its raison d’être: protecting peace and security.

The Russia-Ukraine War is another striking example of a UN failure. Let’s have a look at how, where, and why the UN system fails.

The main responsibility for eliminating the threats to peace or suppressing aggression is given to the UN Security Council which can take binding decisions for all states in order to inflict collective measures, as stated in Chapter VII of the UN Charter, against an aggressor such as political, economic, and even military measures when other measures fail.

The Security Council makes decisions with the majority vote of 9 out of 15 members. However, for a decision to go through permanent members of the Security Council, i.e., China, France, Russia, the United Kingdom, and the United States, must not veto said decisions. These countries have the “veto power” to preventing passing any resolution.

How the UN Failed to Prevent the Russia-Ukraine War

About eight years prior to the Russian invasion of Ukraine, which started on February 24, 2022, Russia’s annexation of Ukraine’s Crimea in 2014 and the confrontations in the Donbas region had already caused enormous tensions and even military confrontations between the two countries, signaling a major conflict.

Unsurprisingly, Russia launched a major military attack in Ukraine on February 24, 2022, naming it a “special military operation.” At the very least, it was an “armed attack” clearly meeting the definition of “aggression” as worded by the UN Charter and endorsed by the UN General Assembly with a decision taken on March 2, 2022.

However, the UN Security Council failed to take any decision to prevent or stop the aggression due to Russia’s veto. During the time, the UN could not carry out an effective process at the level of both the General Assembly and the Security Council to stop the war in Ukraine. The General Assembly failed to organize an extraordinary meeting to decide on possible measures.

Read: Who Is Guilty of War Crimes in Ukraine?

After the beginning of the Russian attack, the Security Council, at its first meeting on February 26, 2022, similarly could not take any coercive decision against Russia, again due to Russia’s use of its veto. Ironically, Russia, which held the rotating presidency of the Security Council, for a period of one month when the invasion of Ukraine took place, has even taken steps that have caused more tensions rather than help move towards peace, by calling the Security Council to a meeting to discuss the “biological weapons” of the U.S. in Ukraine.

Since no decision could be taken, there have been no collective and coordinated measures by the international community against Russia. States are left on their own to decide what to do to stop the war and restore peace in Ukraine, a process that has been quite insufficient.

There has only been partial UN success in reporting, investigating human rights violations, and helping Ukrainian civilians. Raising funds for Ukrainian civilians seems relatively successful. The United Nations and its humanitarian partners launched emergency appeals totaling $1.7 billion to provide emergency humanitarian assistance to people in Ukraine and refugees in neighboring countries. On March 7, the World Bank approved an emergency funding of $700 million to support Ukraine. These funds will ensure the continuation of essential services to the population.

However, the inability of the UN Security Council to take a globally binding decision, which could include collective sanctions, has prevented the international community from assuming a joint and coordinated position towards Russia. As a result, the UN, has remained ineffective in fulfilling its duty in such a challenging situation.

Why Is the UN Peacekeeping System Not Working?

Although the UN has achieved certain success in supporting the right of many countries to self-determination, the development of international law, free trade, human rights, and peacekeeping operations, it has not achieved a similar success in maintaining international peace and security.

The first of the fundamental reasons behind the UN peacekeeping system’s lack of success is structural. The fact that permanent members of the Security Council are given the authority to veto draft resolutions demonstrates that the system was established to work only with the consensus of five countries.

The second reason for the failure of the UN peacekeeping system is the lack of budgetary autonomy. Major contributors to the UN General Budget include the U.S. and other countries that use their financial power to affect the functionality of the UN and to make sure it operates according to their own interests rather than those of the international community.

Another fundamental reason relates to the capacity—or lack thereof—of the UN to enforce its decisions relating to international peace and security, including those of the Security Council. Even if the Security Council is able to take a decision despite difficulties, there is no permanent structure for the UN that will enforce the resolutions. The enforcement is actually left to the power of the member states, if any is willing to act.

Can the UN Work Effectively in the Future?

Since 1945, the UN has tried to undergo a series of reforms in order to adapt to the changing needs and expectations of the international community by alleviating the above mentioned weaknesses. The reform proposals relate to issues such as restructuring the permanent membership of the UN Security Council, increasing the transparency, accountability, and efficiency of the UN secretariat, improving the financial structure, and improving the democratic nature of the UN.

The most recent reform program was prepared by the current UN Secretary General António Guterres. The proposal covers three main areas: development, management, and peace and security. The main objective of the reform concerning the effective protection of peace and security is the prevention of conflicts. Previous proposals focused instead on reforming the Security Council by increasing the number of permanent members of the UN Security Council.

Focusing on the prevention of conflicts would certainly help, but stopping the aggressors is yet to be addressed. Similarly, increasing the number of the UN Security Council permanent members by adding countries like India, Japan, and Germany, could only increase the risk of confronting more vetoes and further stack the system in favor of certain members.

It is essential to establish a UN structure in which the peace interests of the international community—not of certain countries—can be adopted as the main priority. To achieve this, binding decisions on preventing and enforcing peace and security should be taken by a qualified majority, not unanimously.

However, even if all these conditions are met, and timely and appropriate decisions are taken, it will not be possible to effectively protect peace and security if an effective mechanism for the implementation of decisions is not established. In this context, although it may not be immediately possible to establish a military structure affiliated with the UN that is capable of acting in line with UN resolutions, a new system should be established to activate economic, commercial, and political elements against aggressor state/states.

The above suggestions may be seen as very difficult or even impossible to implement. It should, however, be emphasized that the very existence and well-being of the international community depends on the protection of its peaceful order, just as in any local or national community. States should therefore find a way or establish a system to ensure that international peace and security are protected effectively.