The UNGA meeting comes at a time when there are crises on nearly every front and world leaders have a lot on their plate. 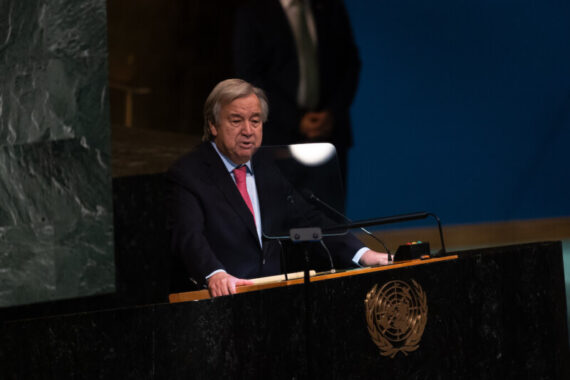 he 77th session of the United Nations General Assembly (UNGA) comes at a time when there are crises on nearly every front and world leaders have a lot on their plate. Tackling inflation and economic instability, humanitarian matters, climate change, floods, droughts and fires, and the effects of the pandemic are only a few of the many challenges.

Expectedly, the war in Ukraine and nuclear threats seem to dominate this year’s agenda as Russian President Vladimir Putin warns the world that he “is not bluffing” about using nuclear weapons.

During the meetings, which are taking place between September 13 and 27, countries have voiced their concerns and presented their agendas, while leaders have an opportunity to engage in meetings on the sidelines in commissions of multilateral cooperation.

Leaders or high-level representatives attend in person; however, Ukrainian President Volodymyr Zelenskyy was allowed by a General Assembly vote to submit a prerecorded speech. Ukrainian Ambassador Sergiy Kyslytsya stated prior to the vote that Zelenskyy, as commander-in-chief, must be and is present with the army of Ukraine.

Read: The False Promise of the United Nations

A UN Security Council meeting was held on September 22 to discuss the war in Ukraine. The meeting focused on accountability for alleged abuses committed by Russia.

Russian Foreign Minister Sergei Lavrov, who appeared only for his speech, reiterated claims that Russian speakers in the east of Ukraine were oppressed and criticized the West’s support for Ukraine. He said that the West’s goal was to prolong the fighting and “wear down and weaken Russia.”

U.S. Secretary of State Antony Blinken blamed Putin for adding fuel to the fire during the week of the UNGA meeting. Blinken stated that this “shows his utter contempt and disdain for the UN Charter, the UN General Assembly, and this council.”

Blinken also raised concerns about the discovery of mass graves and torture allegations in Ukraine. In March 2022, the International Criminal Court (ICC) had opened an investigation and sent teams to Ukraine to gather evidence of possible crimes. Prosecutor Karim Khan told the council that more ICC staffers would be dispatched the following week, and said that he believed there are reasonable grounds that crimes were committed.

China’s Foreign Affairs Minister Wang Yi stated that the investigations into violations of international humanitarian law should be objective and fair, and that they “must not be politicized.”

Read: The War in Ukraine: The Protection of International Peace and the UN

Highlights from the General Debate

The General Debate, the main event, began on September 20 and will continue until September 26. Delegates from each member state have 15 minutes to speak; however, leaders often go above the time limit.

Perhaps one of the most anticipated speeches addressing the UNGA was that of Ukrainian President Zelenskyy. Zelenskyy put forward a peace formula which called for comprehensive punishment until the internationally recognized Ukrainian border is restored, aggression is stopped, and losses are compensated. He suggested a Special Tribunal to punish Russia which could also be a warning to potential aggressors in the future. Zelenskyy accused Russia of targeting nuclear power plants and “radiation blackmailing.” “We cannot agree to a delayed war. Because it will be even hotter than the war now,” he warned.

Polish President Andrzej Duda heavily criticized Russia in his speech and called for war reparations to Ukraine affirming that “there is no justice without reparations.”

Great Britain’s new prime minister Liz Truss pledged to increase military support to Ukraine for as long as it takes. She stated that the UK will spend 3% of its GDP on defense by 2030, and will position itself as a leading security actor in Europe.

The Iran Nuclear Deal was brought to the agenda by Ebrahim Raisi, Iran’s president. He addressed the stalled talks saying, “We gave ample opportunities for those who trampled upon and left this agreement to return to it. We have been extremely flexible and had it not been for our flexibility, the negotiations would have stopped in the very first few days… Our wish is only one thing: commitment, observance of commitments.”

U.S. President Joe Biden reiterated that while the United States is clear that it would not allow Iran to acquire nuclear weapons, it is prepared for a mutual return to the Joint Comprehensive Plan of Action if Iran steps up to its obligations.

Furthermore, the U.S. president called Putin’s nuclear threats “a reckless disregard for the responsibilities of the non-proliferation regime.”

Biden remarked on the competition between the U.S. and China, saying, “We do not seek conflict. We do not seek a cold war. We do not ask any nation to choose between the United States or any other partner.” He stated that the U.S. sought to uphold peace across the Taiwan Straits, and that it was committed to its One-China Policy.

Biden addressed the protests that have emerged following the death of Mahsa Amini, a young woman who was in the custody of the Iranian morality police. “Today we stand with the brave citizens and the brave women of Iran, who right now are demonstrating to secure their basic rights.” Biden also called out human rights abuses by China, Burma, and the Taliban.

In his speech, Nigerian President Muhammadu Buhari mentioned that Africa and other developing nations only accounted for a small proportion of greenhouse gas emissions, but are the hardest hit by the consequences of climate change. He stated, “Rocketing energy costs worldwide are, in part, the product of conflict and supply disruptions to Europe and the Americas. Yet, we are all paying the price. It is, therefore, our expectation that this UNGA 77 and the upcoming COP 27 [2022 United Nations Climate Change Conference to be held on November 6-18] will help galvanize the political will required to drive action towards the fulfillment of the various existing climate change initiatives.”