Vladimir Putin was asked in April 2012 in the Russian Duma about whether he supported creating a network of Russian private military companies. 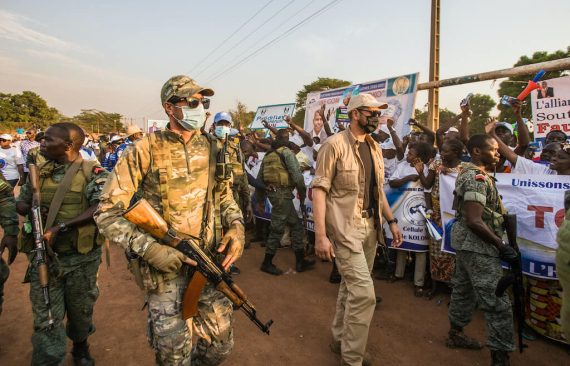 Appearing for the first time in 2014 at the border with Ukraine and controlled by Yevgeny Prigozhin, the Wagner Group is engaged in a number of conflicts. Syria and Libya were two countries where Russia’s involvement in civil wars and alleged employment of Wagner Group proxies were most visible.

In April 2012, when then-Prime Minister Vladimir Putin was asked in the Russian Duma about whether he supported the idea of creating a network of Russian private military companies, he replied positively and emphasized that PMCs could be tools of influence abroad, allowing the realization of national interests without the direct involvement of the state.

As reported by the Associated Press, U.S. Secretary of State Antony Blinken cautioned Russia’s Wagner Group on Saturday against meddling with attempts to foster democracy in the West African country of Mali.

Mali “remains a linchpin for future stability in the Sahel and we have deep concerns about that stability and deep concerns about the extremism and terrorism that is spreading tentacles in the region,” Blinken stated during a joint press conference with Senegal’s foreign minister, Aissata Tall Sall. The Sahel region of West Africa encompasses a wide territory south of the Sahara Desert, where extremist organizations are battling for control of the region.

The French government on December 23, 2021 criticized the decision by the Malian transitional authorities to authorize the deployment of the Wagner Group, and accused Russia of sponsoring the private military company’s employment of mercenaries in the West African nation.

In a statement, the Western nations warned that the deployment of Wagner mercenaries could “lead to an aggravation of the human rights situation in Mali [and] threaten the agreement for peace and reconciliation” in the conflict-torn country.

Read: What the Return of Mercenaries Means for the World Politics

The Russian Foreign Minister Sergey Lavrov instead has said that the company has a “legitimate” right to be in the West African nation because it was invited by the transitional government, and he has insisted that the Russian government is not involved.

On September 23, 2021, Chad’s foreign minister issued a strong warning against outside involvement, using Russian paramilitaries working in neighboring countries as an example. When questioned about Russia’s Wagner Group, Cherif Mahamat Zene said that “external interference, wherever it comes from, poses a very serious problem for the stability and security of my country.”

The concerns stem from the fact that Chad’s deputy foreign minister also warned the United Nations Security Council that mercenaries from Libya are crossing into the Sahel and threatening to undermine progress made in the fight against terrorism by five West African countries, which could plunge the region into violence that would be difficult to manage and would be harmful to Africa as a whole and could turn the continent into “a battlefield and base for international terrorism.”

The United Nations issued a report  on June 25, 2021, in which it accused Russian instructors in the Central African Republic’s armed forces of being engaged in massive indiscriminate killings, looting, and enforced disappearances. The report was authored by a panel of specialists. Despite the fact that the report to the United Nations Security Council makes no reference of those instructors being Wagner associates, news reports and the United Nations’ working committee on mercenaries establish the connection.

In order to train Central African Republic troops, President Touadéra has sought the assistance of the Russian government, and a Russian official serves as the president’s security advisor. Some analysts believe that this is part of a trend of Russian military involvement spreading throughout Africa.

As reported by the United Nations specialists group on March 31, 2021, the Russian contractors collaborate closely on a UN peacekeeping deployment that has been stationed in the Central African Republic since 2014. It is the purpose of the United Nations Multidimensional Integrated Stabilization Mission in the Central African Republic (MINUSCA) to protect civilians while also creating an atmosphere that would enable the nation to establish long-lasting institutional structures.

The 13,500 UN forces are tasked with protecting civilians and preventing armed groups from inflicting harm on the populace. They helped secure the election, but they are helpless to disarm the rebels and are often attacked by the rebels themselves. Some have also been accused of sexually abusing children.

The commander of the EU training missions, General Jacques Langlade, stated that “Due to the control exerted by the mercenaries of the Wagner group over the CAR armed forces, the European Union, keen to respect international humanitarian law, has decided to temporarily suspend training”.

“This blurring of the lines between civil, military and peacekeeping operations during the hostilities creates confusion about the legitimate targets and increases the risks for widespread human rights and humanitarian law abuses,” said Jelena Aparac, Chair-Rapporteur of the United Nations working group on private military contractors.