What Is Turkey’s Climate Change Strategy?

There is little doubt that climate change is to remain one of the top issues on the world agenda. 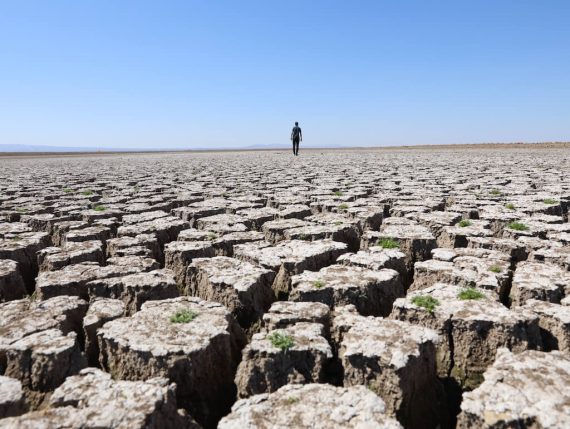 A view of the Devegecidi Dam Lake which is in danger of drought due to the climate change in Diyarbakir, Turkey on September 21, 2021. While migratory birds try to find food in the muddy ground on the lake, endemic plants and animals are in struggle in their natural habitats. Photo by Bestami Bodruk. Anadolu Images.

There is little doubt that climate change is to remain one of the top issues on the world agenda. As greenhouse gas emissions increase and global warming speeds up, climate change becomes more tangible and its risks turn more devastating. In recent years, almost every single corner of the world has experienced extreme weather changes. This urges politicians and decision-makers to take concrete action to tackle climate change. The Sixth Assessment Report of the Intergovernmental Panel on Climate Change (IPCC) shows that the world’s overall temperature has already risen 1.5oC degrees. Today, we cannot unring the bell, but we can slow down global warming.

The release of high amounts of greenhouse gases such as carbon dioxide, methane, and nitrous oxide into the atmosphere increases the air, water, and land temperatures, and causes global warming. Climate change, on the other hand, refers to the increase in temperature caused by global warming, as well as melting glaciers, changing water levels in the oceans and seas, heavy and irregular precipitation, storms, and drought. Today, most of the emissions-caused global warming is due to human actions, while the effect of natural processes is quite limited.

The Industrial Revolution jumpstarted the processes that have caused climate change. When Western countries changed their production processes, extensive use of fossil energy resources – mainly coal – occurred and human-caused greenhouse gas emissions began to rise. The amount of carbon dioxide emissions, which were close to 1 billion tons in the 1850s reached 35 billion tons in 2019. Due to high emissions, the temperature is also increasing, and the risks arising from climate change are becoming more threatening. (Graph 1)

According to the IPCC, which was established to inform governments about climate change, the Mediterranean belt is among the top regions that will suffer from global warming and climate change. Due to its location in the Mediterranean, Turkey is among the countries most affected and most expected to be affected by the climate crisis. The extreme weather changes, such as drought, floods, forest fires, and increasing pollution, that have been experienced in the last couple of years are directly related to global warming and reveal the need for Turkey to take immediate action.

Due to its location in the Mediterranean, Turkey is among the countries most affected and most expected to be affected by the climate crisis.

In fact, since the beginning of the 2000s, Turkey has been striving to reduce greenhouse gas emissions by developing policies, setting targets, and implementing projects in many sectors from energy to urbanism, agriculture forestry to industry. The most concrete example of this is its installed capacity of renewable energy: the country has increased its renewable power more than fourfold since 2000 and it now constitutes approximately 52 percent of Turkey’s total installed capacity. (Table 1)

The Zero Waste project, launched in 2017 and developed to combat climate change, is one of Turkey’s pioneering projects. The main objectives of zero waste are to prevent waste, use resources efficiently, and to prevent waste generation by reviewing the processes that generate waste, or at least, to reduce it as much as possible. Since the Zero Waste project was initiated, Turkey has increased its recycling rate from 13 percent to over 20 percent in three years, thus saving 315 million kilowatt-hours of energy, 345 million cubic meters of water, and 41 million cubic meters of storage space. Most importantly, two billion tons of greenhouse gas emissions have been prevented.

Since the beginning of the 2000s, Turkey has been determined to increase its forest assets.

Forests also play a major role in combating climate change. Thanks to their carbon absorption feature, forests reduce greenhouse gas emissions by converting the carbon dioxide into the oxygen. Since the beginning of the 2000s, Turkey has been determined to increase its forest assets. Forest areas, which were about 20 million hectares in 2000, reached 23 million hectares in 2020, and areas lost as a result of fires are also largely recovered through reforestation.

Apart from its individual efforts, Turkey joins international actions to tackle climate change. The country is among the first to sign the United Nations Framework Convention on Climate Change (UNFCCC) and the Kyoto Protocol. Although there were some structural problems due to its status in the UNFCCC, which is the main umbrella for all climate agreements, the country overcame the problems with diplomacy and ratified both agreements. On October 7, 2021, the Paris Agreement was unanimously approved by the Grand National Assembly.

As an EU candidate and a member of the Customs Union, Ankara is also responsible for complying with the European Green Deal and the country published the Green Deal Action Plan in July 2021. Being one of the founding countries of the Organization for Economic Co-operation and Development (OECD), Turkey now emphasizes its need for green financing at every opportunity. Acquiring international financial aid to accelerate the efforts to combat climate change is one of the most important items on Ankara’s agenda.