Experts contend that the UAE obtaining these jets, drones, and munitions could have major implications for the Middle East’s balance of power. 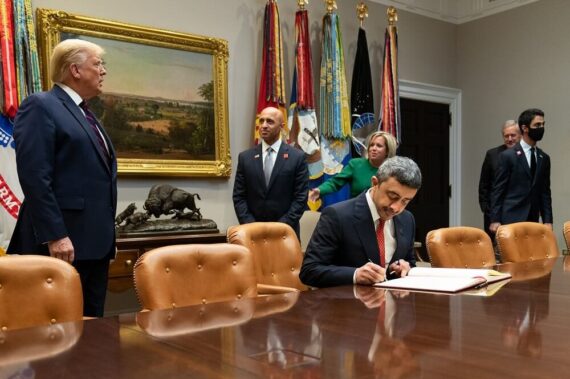 US President Donald Trump looks on as UAE's Minister of Foreign Affairs Abdullah bin Zayed Al-Nahyan signs the guest book before attending a signing ceremony for the agreements on "normalization of relations" reached between Israel, the UAE and Bahrain at the White House in the US on September 15, 2020. Photo by Shealah Craighead, The White House via Anadolu Images

On December 9, efforts in the U.S. Senate to block a $23 billion arms sale to the United Arab Emirates (UAE) failed. The votes underscored widespread Republican support for boosting the UAE’s military edge mainly due to Abu Dhabi’s role in the Arab region’s anti-Iran camp.

“The UAE deeply appreciates the consideration of all Senators on today’s votes,” said the oil-rich Gulf country’s ambassador to Washington Yousef al-Otaiba. “Continued US support enables the UAE to take on more of the burden for our collective security — ours, yours and our partners.”

Now pressure from certain politicians and civil society organizations is beginning to come down on President-elect Joe Biden to cancel this historic weapons deal after President Donald Trump leaves the Oval Office. How Biden addresses this sale will be an early test of his administration’s true commitment to changing US foreign policy in order to further prioritize human rights.

In October, Biden-the-candidate vowed to “reassess our relationship with the Kingdom [of Saudi Arabia], end US support for Saudi Arabia’s war in Yemen, and make sure America does not check its values at the door to sell arms or buy oil.” It is unclear the extent to which the President-elect sees selling arms to the UAE as a violation of Washington’s commitment to U.S. “values”.

Both publicly and privately, the Israeli government defended this massive weapons sale to the UAE, which formalized diplomatic ties with Israel earlier this year as part of the Abraham Accords.

Antony Blinken, Biden’s pick for Secretary of State, has stated that the incoming administration will give the weapons deal a “hard look”. Given the UAE’s controversial interventions in Libya and Yemen, scores of activists are urging Biden to halt this sale, which “would cause devastating harm to both the people in the Middle East and America’s standing in the region”, according to the Democracy for the Arab World Now’s Michael Eisner and Sarah Leah Whitson.

“The harm in the case of the UAE arms deal is wholly foreseeable. Just as you can predict the consequence of selling a loaded pistol to a serial murderer, you can anticipate the damage that will be wrought by this arms deal.”

This arms sale would make the UAE the first Arab country to obtain F-35 stealth fighter jets, the most advanced of their kind in the world. The deal would also put 18 MQ-9B Reaper armed drones in Abu Dhabi’s hands. Selling these weapons to Abu Dhabi would provide “reinforcement of our friends who see common enemies and are working directly to move their country and their region in a much better direction,” asserted Republican Senator Roy Blunt.

Experts contend that the UAE obtaining these jets, drones, and munitions could have major implications for the Middle East’s balance of power. With such sophisticated fighter jets and drones in its arsenal, the UAE’s air force would receive a significant edge. Currently, the Emiratis have been flying Chinese drones in Libya and Yemen, yet US-produced ones are markedly superior.

The F-35s and advanced drones would empower the UAE to strike against essentially any target in the Middle East. Under such circumstances, it is easy to imagine Abu Dhabi feeling emboldened to act more aggressively in a region beset by widespread turmoil and chaos.

Both publicly and privately, the Israeli government defended this massive weapons sale to the UAE, which formalized diplomatic ties with Israel earlier this year as part of the Abraham Accords. Despite certain lawmakers in Washington opposing this transfer due to their worries about Israel’s Qualitative Military Edge (QME) being compromised, the Trump administration believes that efforts to counter Iran will be more fruitful with Abu Dhabi possessing such weaponry. 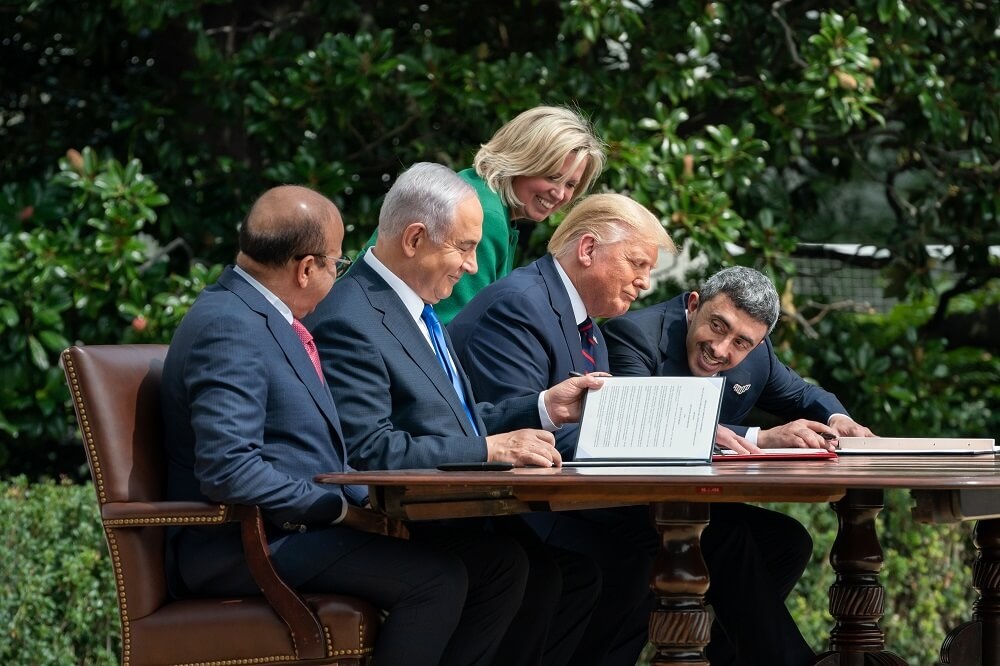 But some officials in Washington opposed to this arms sale to Abu Dhabi point to the UAE’s relations with Russia and China.

But some officials in Washington opposed to this arms sale to Abu Dhabi point to the UAE’s relations with Russia and China. Democrats are particularly focused on how Abu Dhabi’s security links with these two powers. Given the likelihood that Biden’s administration will take a far more hardline stance against Moscow, this argument about countering Russia could possibly convince the incoming White House to cancel the transfer.

“The UAE is unique – they have very close, active defense partnerships with both China and Russia,” tweeted Democratic Senator Chris Murphy at the beginning of this month. “In the classified briefing, Trump officials could not detail how our most sensitive technology – on the Reapers and our F-35 jets – will not find its way to Russia/China.”

“[Washington] should refrain from exporting F-35s to the UAE until Abu Dhabi takes tangible steps toward decoupling from Russia,” argued Samuel Ramani, a doctoral researcher at Oxford University. “The precedent of suspending F-35 sales to Turkey after it purchased Russia’s S-400 missile defense system and announced plans to cooperate with Russia on constructing the S-500 system should be applied to the UAE.

Unless the UAE distances itself from Russia, there is an unacceptably high risk of inadvertent transfers of U.S. technology to Russia via Abu Dhabi and Russian missile defense systems becoming interoperable with F-35s.”

The Factor of Turkey

How Biden handles this US-UAE arms deal will have important implications for the US-Turkey alliance. As a fellow NATO member, which the US has refused to sell F-35s to, Turkey would strongly object to the UAE receiving such fighter jets, sophisticated drones, and munitions. With Ankara and Abu Dhabi’s relationship continuing to deteriorate in a tense standoff that some experts label a Turkish-Emirati “Cold War”, Turkey would see a completion of this transfer as a major threat to Ankara’s own geopolitical and security interests in the Middle East and North Africa.

As tensions between Turkey and Greece remain high amid maritime disputes, officials in Ankara would see Abu Dhabi and Athens’ military cooperation as a growing threat to Turkey if such a deal goes through. Within this context, the odds are excellent that Biden not upending this arms sale to the UAE would result in Ankara having major problems with Trump’s successor early on in his presidency. Given the extent to which Biden will need to work closely with Ankara, this factor will likely weigh heavily on the minds of foreign policy decision-making in his administration.

To be sure, the US Senate’s votes against blocking this massive arms deal constituted a major victory for the UAE. The leadership in Abu Dhabi is hopeful that Biden will not cancel this transfer. Considering how the votes were almost entirely along partisan lines, it is clear that the UAE will have to contend with future challenges when it comes to dealing with members of Biden’s party.

By permitting the sale of 50 of these top-of-the-line jets and drones to Abu Dhabi, Biden would be sending a strong message to the UAE about how his administration views this Gulf powerhouse as a trustworthy and critical partner which has interests that align with those of the US. But if the 46th president decides to nix the transfer, the UAE will realize that it may have difficulties in terms of dealing with the US in the post-Trump period notwithstanding how the Abraham Accords strengthened Abu Dhabi’s image in Washington.

Also Read
Who Is in Control of Egyptian Football?
We use cookies to optimize your online user experience. To learn about our use of cookies and how you can manage your cookie settings, please see our Privacy Policy. By continuing to use our site you are excepting our use of cookies.Accept Cookies & CloseMore Info