The modest diplomatic gains which al-Kadhimi has achieved stand at odds with numerous insurmountable political and economic challenges he faces at home. 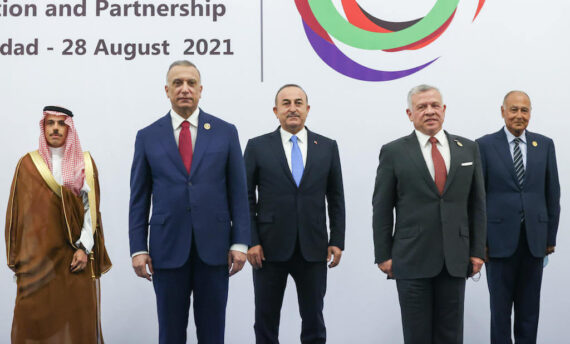 Iraqi Premier al-Kadhimi and his mentor Iraqi President Barham Saleh are making a futile attempt against all odds at home to carve a new leadership role for the country by availing themselves of the chaotic internal conditions and the strained and fragile post-Arab Spring Middle East order.

A conference was held in Baghdad on August 28, 2021, which the two Iraqi leaders were originally hoping would be a summit. However, the list of attendees shows that it turned out to be a one-day ministerial-level conference.

Al-Kadhimi co-sponsored the conference in Baghdad with French President Emmanuel Macron to discuss the war in Yemen, Lebanon’s collapse, the regional water crisis, and the Saudi-Iranian rapprochement. The Iraqi and the Arab media paid special attention to the conference, raising the expectations.

The statement of the London-based Al-Quds Al-Arabi newspaper read, “The Saudi and Iranian presence, through their foreign ministers, Faisal bin Farhan and Hussein Amir Abdullahian, also indicated an increasing desire on both sides to find lines to meet.”

Iraqi Foreign Minister Fuad Hussein indicated that the Saudi-Iranian meetings are continuing and that they began in Baghdad with a meeting that took place between the ruler of Dubai and the Iranian foreign minister. Iraqi officials viewed the meetings between the emir of Qatar, Egyptian President Abdul Fattah al-Sisi, and Bin Rashid of Dubai as a major breakthrough.

Nevertheless, the rapprochement between Qatar and its Gulf neighbors had commenced before the Baghdad conference. The Saudi-Iranian dialogue was launched in April this year as the U.S. and Iran held negotiations on reviving the 2015 nuclear deal with Iran (JCPOA) – a development which alarmed the Saudis. The latter are afraid of a possible deal at their expense.

Tehran’s sensitive relationship with Baghdad and the issue of not using Iraq as a launching pad to launch attacks on neighboring countries were not addressed. 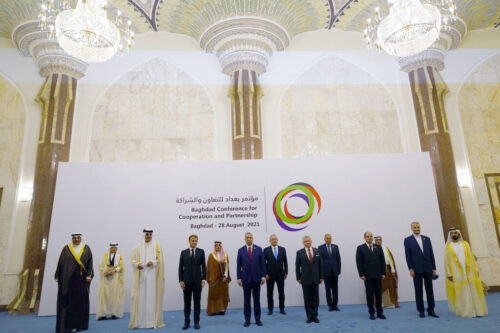 Middle East leaders and officials pose for a photo during the Baghdad Conference for Cooperation & Partnership in Baghdad, Iraq on August 28, 2021. Photo by Iraqi Prime Ministry Press Office via Anadolu Images

Iraqi leaders’ expectations turned out to be unrealistic due to the high stakes, rising tension in the region, and the lack of the needed preparation for negotiations. The conference was to a large extent exploratory in nature and its resolutions were merely expressions of intention.

“We have always welcomed improving ties with regional countries such as Saudi Arabia, and it is a priority of our President Raisi’s foreign policy. Whether this will happen in Iraq next week, I seriously doubt it,” said a senior Iranian official on August 25, 2021 to VOA.

Al-Kadhimi and Macron are trying to seize the opportunity presented to them to assert leadership and enhance their dwindling power base at home as elections are approaching. It appears that President Joe Biden’s strategic shift in foreign policy orientation from the Middle East to Asia, his stated policy of making human rights the priority of his foreign policy abroad, and the recent debacle in Afghanistan have alarmed Arab regional leaders, Saudis, and the United Arab Emirates and convinced them to chart a new foreign policy in the region and regard Washington as unreliable.

Iran has its own reason to be receptive of regional dialogue as well. Being hard-pressed by the U.S.-led economic embargo initiated by the earlier U.S. administrations, and intensified by the Donald Trump administration to maximum pressure, and which the Biden administration so far has done nothing tangible to alleviate, Iran was not in a position to refuse negotiation. What is more, the hardline President Raisi stated during his inauguration speech that there will be serious openings internally and externally to better the conditions in the country.

Finally, being hard-pressed by COVID19, and the shadow war which is continuing with Israelis, Iran had no choice but to act on pragmatic considerations and accept peaceful engagements with its regional foes. However, this does not stop Iran from pursuing its war against the U.S. and its regional allies through regional proxies.

The Baghdad government’s initiative to hold a regional conference also had an Iranian blessing.

Thus, the Baghdad government’s initiative to hold a regional conference also had an Iranian blessing: it is an attempt to find a loophole in the siege wall and isolation imposed by the United States and its allies on Iran.

U.S. officials are fully aware of Iran’s foreign policy objectives but still seem to be committed to the success of the Vienna Talks. For this reason, Biden has empowered Macron, who aspires to a new leadership role abroad to stop his declining popularity at home, to be the channel for conveying messages to Iran. Due to Macron’s occasionally voiced opposition to Trump’s unilateralism, Iran seems to have accepted Macron’s mediating role.

President Saleh of Iraq, following the footsteps of his group leader Jalal Talabani, a former Iraqi president who tried to play a mediating role between Iranian and western leaders, especially the U.S., seems to have convinced al-Kadhimi to initiate this conference.

Saleh has recently been engaged in intensive shuttle diplomacy in Iraq with various influential groups, especially the Patriotic Union of Kurdistan (PUK) and the Kurdistan Democratic Party (KDP), and regional countries, while he also met President Reisi to ensure his second term as president of Iraq. The holding of the regional conference was an attempt to enhance his chance to be re-elected for a second term.

Although al-Kadhimi has made numerous statements to the effect that in the future he will not stand for any post, his recent political statements and the numerous measures he has taken recently indicate that he is hopeful that he will continue in his post most probably in an alliance which will be composed by the opponents of Iran’s dominant influence in Iraq: the Sadr followers of Sairun, the Nasr bloc, and the Kurdish groups. The success of this conference could enhance his role regionally and internally.

Opinion: Meetings Between Iraq, Egypt, and Jordan will Amount to Little

Holding a regional security conference to defuse tension in the Middle East was al-Kadhimi’s initiative which won Biden’s blessing during the last round of dialogue in Washington, attended by Iraq and the United States. Furthermore, al-Kadhimi had recently unraveled a five-year program to carry out economic reforms in Iraq.

Many observers in Iraq viewed this measure as a further indication of his desire to continue in his post. Should al-Kadhimi manage to give Iran the breathing space it needs in its confrontation with the U.S., President Reisi, whom he met with twice so far, will be willing to give him a second chance in power. However, this again might be a futile attempt as Iranians are displeased with him due to his close ties with the U.S. and the Kurdish groups.

Nevertheless, the modest diplomatic gains which al-Kadhimi has achieved stand at odds with numerous insurmountable political and economic challenges he faces at home: rampant corruption, which he has failed to address, and the recent emboldening of the uncontrolled militias in the country have delivered serious blows to his credibility in the eyes of Iraqis.

In brief, Iraq with a myriad of security and economic problems at home and undue Iranian leverage in its internal and external relations is in position to be the Middle East’s new power broker.