Qatar as a major non-NATO ally of the United States, still appears to be the UAE’s primary competitor. 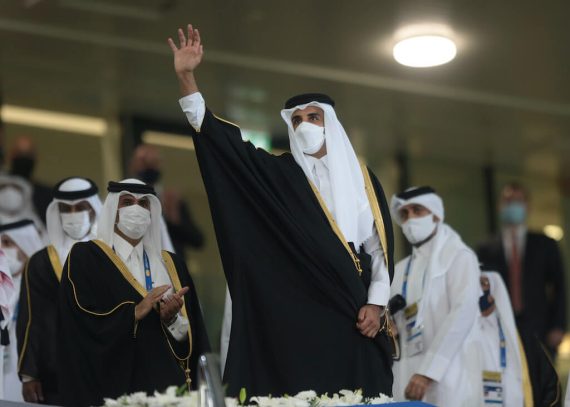 The Gulf reconciliation at the Al-Ula Summit suddenly changed the regional atmosphere and the rhetoric of war among Saudi, Emirati, and Qatari decision-makers. The themes of building trust and confidence over broader regional security moved out of the Gulf context, given the new trend of Gulf diplomacy that favors economic interest over political conflict. The emerging Gulf portrait requires Saudi Arabia, the UAE, and Qatar to polish their international image as the region’s natural stabilizers and peaceful actors.

Although the Al-Ula Summit put an official end to the Gulf crisis, it threw a veil over political divergences for an unpredictable period of time, at which point it may lead to the redefinition of the Gulf states’ security interests. In fact, there is an intolerant ambiance in the post-Al-Ula era. Peace appears on the surface; however, beneath it lies the spirit of competition and aggression via the indirect foreign policies of Qatari and Emirati decision-makers who hide behind the foreign policy rhetoric of peace and stability for the eyes of the international community and, particularly, the United States.

Both Qatar and the UAE use their financial and media powers to challenge each other’s narratives as the central stabilizer establishing regional order. While other regional powers like Turkey, Israel, and Iran expect to benefit from the new Gulf diplomacy and its economic offers, the overall security perceptions of political actors in the Gulf and the Middle East continue to be unstable.

The central question here is to what extent Qatar, Saudi Arabia, and the UAE can tolerate each other’s regional aspirations in negotiating the process of regional order? As the Gulf states don’t have a joint foreign policy and a common defense agenda, establishing bilateral military relations with Gulf and non-Gulf actors independently seems inevitable.

It has been over a year now since Qatar and the UAE agreed on restoring bilateral ties and ending adverse statements against each other. However, the institutional rhetoric of the GCC (Gulf Cooperation Council) on foreign policy and bilateral relations do not change rapidly as illustrated in a speech by Mohammed bin Abdulrahman Al Thani, the foreign minister of Qatar, who stated, “It could take some time to move past this difficult period.”

Official delegations of Qatar and the UAE held a meeting in Doha in early February 2022, and stated their commitment to creating joint mechanisms and procedures for implementing the Al-Ula Declaration. Afterwards, the photograph of Emir of Qatar Sheikh Tamim bin Hamad Al-Thani and Crown Prince of Abu Dhabi Sheikh Mohamed bin Zayed Al Nahyan shaking hands during the opening of the Olympic Games Beijing 2022 demonstrated the intention of the parties to portray a positive diplomatic ambiance at the highest level.

Moreover, the Qatari foreign minister had a phone call with his Emirati counterpart Abdullah bin Zayed Al-Nahyan to condemn the Houthi attacks on civil facilities in the UAE. Although Qatar and the international society have criticized the military engagement of the UAE in the Yemeni civil war, the Qatari side wanted to publicize its condemnation of civilian deaths in order to foster the image of a state promoting peace and stability.

The post-Al-Ula period is associated with a shift from fierce international rivalry, which manifested itself most clearly in political activism during the Arab uprisings, to an era of peace- and investment-oriented foreign policy-making. Qatar and the UAE were in a battle of narratives following the UAE’s unconditional support for Abdel Fattah el-Sisi’s presidency in Egypt after 2013.

Interestingly, Qatar’s piped natural gas exports to the UAE through the Dolphin pipeline continued functioning even during political disputes. Additionally, the Abu Dhabi National Oil Company (ADNOC) and Qatar Petroleum renewed an oil field license in 2018 during the blockade on Qatar. Relations continued in the interest-driven areas, revealing the inconsistent nature of the relationship that harbored political conflicts along with economic ties.

Before the Al-Ula declaration, Qatar and the Emirates continuously utilized their financial power through media and lobbying abroad to put pressure on each other. Recently, Qatar objected to the Abraham Accords signed between Israel, the UAE, and Bahrain, by criticizing the UAE’s efforts to initiate a diplomatic move without negotiating a solution to the Palestinian cause.

After the Al-Ula declaration, one might mention the continuity of the indirect competition over the Hollywood movie The Misfits that portrays Qatar as “Jazeeristan,” a terrorist state and a global financier of terrorism.

The movie, co-produced by the UAE, Paramount Pictures, and Highland Film Group, mentions actual Qatari institutions such as Al-Emadi Hospital, the Lekhwiya police force, and Al Jazeera supporting the state’s “terrorist” activities. Another incident of behind-the-scenes competition can be seen in the UAE’s attempts to encourage journalists in Africa to campaign against Qatar’s hosting of the 2022 FIFA World Cup.

In another case, the UAE’s ambassador to Israel, Mohamed Al Khaja, accused Al Jazeera of continuously manipulating the narrative of the Palestinian cause and shifting the credibility of the events from the truth.

Likewise, Qatari newspapers published the visit of Sheikh Abdullah bin Zayed, the foreign minister of the UAE, the first Emirati official to visit Damascus since 2011, to discuss “new horizons” by referring to the Syrian civil war as a brutal and multifaceted war that has killed innocent civilians.

One can also come across news in Qatari media criticizing the UAE’s labor sponsorship system as problematic given that thousands of migrant children lack schooling and access to healthcare because they are not issued birth certificates by the authorities as a result of being born to unmarried or single parents and not paying medical bills.

The marring of the UAE’s international image during its military involvement in the Yemeni civil war decreased the chances of the Biden administration perceiving the UAE as the primary peacebuilder in the Gulf. The Biden administration’s recent selection of Qatar as a major non-NATO ally to cooperate in security and investment sectors demonstrated that the U.S. foreign policymaking would not tolerate aggressive foreign policies against the region’s instability and neighbors.

As the issue of Muslim Brotherhood is no longer on the table in intra-Gulf discussions or a factor in the Gulf states’ relations with other countries, ideological war narratives  are now replaced with a competition over the display of state capacity to promote peace-building and regional stability.

The process favors Qatar for now, but all this is tied to the U.S. administration’s foreign policy. Upon realizing that, the UAE recently established a new foreign policy built upon the theme of “good neighborliness” so as not to return to the hostile competitive environment and to avoid recalling its notorious military aggression in Yemen.

The UAE’s diplomatic move to reconcile and improve ties with Turkey through highest level visits and positive statements about the visit of Israel President Isaac Herzog to the country in January 2022  indicate the UAE’s determination to diversify regional allies peacefully and independently of its Gulf neighbors. In this new era of narrative wars built upon peace rhetoric, Qatar as a major non-NATO ally of the United States, appears to be the UAE’s primary competitor.