The UAE’s maneuver capacity can be related to the abandonment of religious themes in its foreign policy rhetoric. 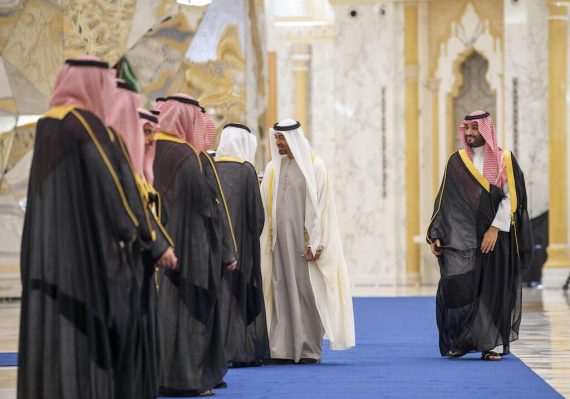 Since the last months of 2021, the UAE’s diplomatic moves in foreign policy have been attracting the attention of Gulf scholars and observers. In an interview, Dr. Sultan Ahmed Al Jaber, the UAE’s minister of industry and advanced technology, noted that the recent diplomatic moves by the UAE are critical to the country’s new foreign policy. “The art of partnership is part of our DNA, and it has been key to our success over the years,” said Al Jaber. Signals of change and using diplomacy instead of military power from Hormuz to the Suez constitute a sharp rupture for UAE foreign policy.

Following the withdrawal of its military presence from Yemen in mid-2019, the UAE regional security policy entered a de-escalation mode. Political conflicts with neighbors started being replaced with an economic interests-driven foreign policy. The Gulf states’ regional loneliness, partly due to the Biden administration’s hesitancy to take an active role in regional affairs, forced the UAE and other GCC states to fend for themselves within the shifting regional security dynamics and alliances.

While the Al-Ula reconciliation ended the groupings of the GCC states, the post-reconciliation process sparked a diplomacy rivalry among the GCC actors which strived to present themselves as the region’s important stabilizers and peacemakers.

Read: Managing the Rivalry between the UAE and Turkey

The rhetorical shift in UAE foreign policy can be best understood by looking into the “10 Principles” announced in the “Projects of the 50” campaign in 2021. The projects publicized the strategic roadmap planning for the UAE’s economic, political, and social development. Among the “10 Principles,” “good neighborliness” stands as one of the UAE’s essential principles for stable political, economic, and social relations with its neighbors.

While openness, tolerance, and peace were mentioned as the state’s core values, the UAE calls for peace, harmony, negotiation, and dialogue to resolve all conflicts by envisioning bilateral relations based on a non-security or non-military perspective. This new narrative will help the Emirates to overcome its thorny relations with Turkey.

Following the UAE’s military withdrawal from Yemen, the UAE-Saudi relations entered a period of standoff where distrust rose. After the 2017 Qatar diplomatic crisis, the UAE had adopted a common security understanding with Saudi Arabia that endured until the withdrawal of the Emirates from Yemen in mid-2019. Although the UAE was also militarily disengaged from several bases like Eritrea or Somaliland, its departure from Yemen made Saudi Arabia the foremost responsible for Yemen’s humanitarian crisis internationally.

Read: The Straw That Might Break the Camel’s Back in Saudi-UAE Relations

In turn, this damaged the international image of Saudi Crown Prince Mohammed bin Salman (MBS) and put the domestic legitimacy of the Yemen War at risk. MBS later appointed his full brother Khalid bin Salman as the deputy minister of defense to lead the war in Yemen, thus diverting attention from criticism on his person.

The economic aspect of the Saudi-Emirati tension is more about the clash of regional interests over the OPEC (Organization of the Petroleum Exporting Countries) oil price crisis in July 2021 and the Saudi decision to amend the rules of importing products made in free zones (which mainly targeted UAE’s ports). Both incidents opened the way for the publicization of the quiet rifts between the two Gulf states which have been long-term allies. Moreover, the kingdom’s entrance into regional tourism through the moderate opening of art venues, cinemas, and concerts, and the launching of national projects such as NEOM, Al-Ula, and Amaala, likely disturbed the Emirates’ status as the Gulf’s tourism hub.

The instability of the “common destiny” themes among GCC states became more evident in the aftermath of the Al-Ula summit in January 2021. Alongside achieving reconciliation with Qatar, the summit opened the way for the reconstruction of a new dynamic among the Gulf states which began establishing bilateral relations with third parties that prioritized their economic interests and domestic developmental projects even if these opposed the interests of other GCC states. This marked the start of a new period of intra-GCC relations in which one can question the themes of unity and common destiny in the GCC.

The new pragmatism of the UAE foreign policy resulted from the Emirati decision-makers’ abandonment of a proactive foreign policy and military interventions in Syria, Yemen, and Libya. Although the UAE did not experience demonstrations such as those in Saudi Arabia and Bahrain, the potential for the rise of the Muslim Brotherhood, through the Al-Islah movement that was founded in 1974, was perceived as a threat to the existing state structure and the royal families of the seven emirates of the UAE. This fear caused the demonization and the labeling of the Muslim Brotherhood as a terrorist group working against the stability of the Gulf monarchies.

The close rhetoric between Turkey and the Muslim Brotherhood for almost ten years, pushed Emirati decision-makers to adopt adverse policies towards Turkey in various regional crises.

The close rhetoric between Turkey and the Muslim Brotherhood for almost ten years, pushed Emirati decision-makers to adopt adverse policies towards Turkey in various regional crises like the Syrian Civil War and the Eastern Mediterranean until the visit of Sheikh Mohammed bin Zayed Al-Nahyan (MBZ), the crown prince of Abu Dhabi and de facto ruler of the Emirates, to Turkey in November 2021.

Before visiting Turkey, Sheikh Mohammed and other UAE decision-makers made diplomatic visits to Jordan, Egypt, and Syria as part of the claimed Emirati diplomatic activism in the region. However, the visit to Turkey attracted more regional and international attention due to the lousy record of bilateral relations since 2011 and accusations over the UAE’s financial support to the foiled coup d’état attempt in Turkey in 2016.

Despite tense political relations, Turkey’s trade ties with the UAE have continued to improve, and UAE exports to Turkey rose to 110 percent while total trade increased by 21 percent from 2019 to 2020. The satisfaction on both sides following the Erdoğan-MBZ meeting and the agreements focusing on the strategic investments to generate steady and safe revenues in the long term, including the logistics, health, and energy sectors, demonstrated both states’ preference to overlook their political divergences for the sake of economic advantages.

As a result, regional cooperation, dialogue, and negotiation themes initiated new diplomacy rhetoric between Turkey and the UAE. Similarly, one might emphasize the change of Turkish foreign policy rhetoric towards the Gulf, such as referring to the six Gulf states as Turkey’s friends – not only “brotherly Qatar” anymore.

Throughout the 2017 Qatar crisis, Turkey adopted a security-oriented approach and claimed to provide a security umbrella to the whole Gulf. Turkey adopted this controversial rhetoric to calm the anxieties of Saudi Arabia and the UAE after establishing a Turkish military base in Qatar. Still, it made Turkey’s relations with the prementioned Gulf states even tenser. Now, one can observe a change in the rhetoric of almost every Gulf state towards establishing non-military bilateral ties. This does not harm Turkey’s relations with Qatar, but allows Turkey to include itself in the Gulf regional security architecture through cooperation, trade, and peaceful means.

In contrast to Saudi Arabia, the UAE has been more willing to establish relations regional actors like Iran or Israel. The UAE’s maneuver capacity can be related to the abandonment of religious themes in its foreign policy rhetoric. At the same time, Saudi Arabia has historically adopted a “distinctive” status for itself in the Arab world.

While Oman, Kuwait, and Qatar have always cultivated significant relations with Iran, Saudi and Emirati decision-makers have viewed Iranian regional activities and proxy wars as working against the domestic security of regional states such as Lebanon, Syria, Yemen, or Iraq. Interestingly, Iran’s imports from the UAE reached $5.39 billion in the period of March-August 2021, illustrating the high volume of trade relations between the two even in times of crisis.

However, since April 2021, behind-the-scenes meetings between Iranian and Saudi officials were revealed, which jump-started efforts to normalize  diplomatic ties with Iran. The endeavors of the Gulf states came in the form of re-establishing diplomatic relations with Iran without waiting for the Biden administration’s steps to renew the 2015 Iran Nuclear Deal, which would bring Iran a vainglorious opponent to the diplomacy table.

Similar to the Saudi side, at the Baghdad Summit held in August 2021, the UAE’s Vice President and Ruler of Dubai Mohammed bin Rashid Al Maktoum met Iranian Foreign Minister Hossein Amir-Abdollahian to discuss the possibilities of a “neighborhood policy and diplomacy.”

In December 2021, after Sheikh Tahnoun bin Zayed Al Nahyan, UAE national security advisor, visited Iranian President Ebrahim Raisi in Tehran, the efforts of UAE officials appeared as a continuation of the UAE’s foreign policy to build bridges and manage the political divergences that will contribute to the regional prosperity and stability. By keeping diplomatic ties with Israel and Iran, the UAE seeks its economic interests in the Red Sea and Strait of Hormuz while allowing Israel “a foothold in the region” that will likely disturb the Iranian side.

As illustrated by MBS’s visits to five GCC states before the 42nd GCC Summit on December 14, 2021, Saudi Arabia did not fall behind the UAE’s diplomatic maneuvers.

Saudi decision-makers are aware that their rhetoric of “distinctiveness” within the Muslim world and their hegemonic claims over solving regional disputes no longer match the realities on the ground. Saudi Arabia and the UAE seem to accept the emerging Gulf politics shaped around diplomatic rivalries built on peaceful conflict resolution and international legitimacy. Remarkably, the UAE prefers to sweep its disputes under the carpet and to act according to the principle of “good neighborliness.”

However, the political schisms and cooperation in this new neighborhood will be continuously redefined as the future stability of the Gulf states requires ongoing compromises on their clashing political, security, and economic interests.

Also Read
Why the UAE is Denouncing Israel’s Brutality